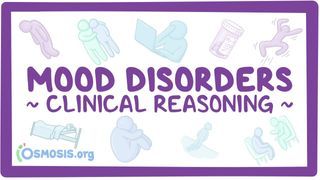 Mood disorders are a group of illnesses that describe serious changes in the emotional status that can interfere with day-to-day activities like working, studying, eating, and sleeping.

Mood disorders can precipitate a substance addiction, and in some cases can lead to suicide.

The underlying cause of mood disorders is poorly understood, but risk factors include a family history and personal trauma.

For example, there’s usually an imbalance of serotonin, norepinephrine, and dopamine, which are neurotransmitters that help regulate mood, reward-motivated behavior, appetite, and sleep.

Each of these neurotransmitters is thought to have an impact on specific symptoms, like norepinephrine on anxiety or attention, serotonin on obsessions and compulsions, and dopamine on attention, motivation, and pleasure.

All of these are characterized by depressive episodes, which consist of nine major symptoms - the exception being dysthymia, which accounts for only six of the milder symptoms.

First, a person feels depressed, hopeless, or lacks a sense of purpose most of the day, every day.

Second, there’s anhedonia - which means a diminished interest in an activity that used to be really pleasurable - like no longer enjoying cooking or gardening, if that was once a hobby.

Third, either weight gain or weight loss, because of an increase or decrease in appetite.

Fourth, is sleeping too much or too little from what used to feel normal.

Sixth, a person might have persistent feelings of worthlessness.

Eighth, a person may have difficulty concentrating.

The symptoms, regardless of the episode’s nature or disorder type, must be present for the entire duration of the episode and must affect most of the day, while also negatively impacting a person’s life.

According to DSM-5, the disorder is characterized by episodes that last for at least two weeks and which involve changes in affect, cognition, and neurovegetative functions such as decreased ability to concentrate and fatigue.

The episodes must include five of the key symptoms that describe depressive episodes, and two of them should be the persistence of depressive mood and anhedonia, while the rest can be either of the remaining seven.

Family and friends may also be helpful by reporting symptoms that may otherwise be ignored or unobserved by the individual, especially when it comes to weight changes and loss of interest in pleasurable activities that the individual once enjoyed which are easier for an outsider to notice.

Other tools include self-rating symptom scales like the PHQ Depression Scale or the Hamilton Rating Scales, which an individual can use to rate how they feel.

Also, it is important to understand that periods of sadness and grief are normal aspects of every individual's life. They should not be diagnosed as a major depressive episode unless criteria are met for severity, five out of nine symptoms; duration, symptoms present most of the day for nearly every day over at least 2 weeks; and impairment, they must negatively affect the individual’s life.

Another mental health condition that can have depressive symptoms is persistent depressive disorder, a condition previously called dysthymia.

Here the symptoms of depression are more mild and they persist over longer periods of time, specifically two or more years with two or more of the following symptoms: a change in appetite, a change in sleep, fatigue or low energy, reduced self-esteem, decreased concentration or difficulty making decisions, and feelings of hopelessness or pessimism.

In contrast, the episodes in major depressive disorder last a medium of four weeks.

Then, there’s premenstrual dysphoric disorder, which is when depressive symptoms occur during the luteal phase of the menstrual cycle - that is, 2 weeks before menstrual bleeding, and then the symptoms usually remit a few days after the onset of menses.

Another common condition is substance or medication-induced depressive disorder, which is when abuse or withdrawal from a substance like alcohol, opioids, cocaine or amphetamines causes the depressive episode.

For example, a depressed mood that occurs only in the context of withdrawal from cocaine would be diagnosed as cocaine-induced depressive disorder.

Depressive disorder due to another medical condition can be distinguished from major depression based on three particularities: first, the absence of depressive episodes prior to the onset of the medical condition.

Second, the condition has the potential to cause depressive disorder, especially if it causes severe pain and physical disabilities, and third, symptoms resolve once the illness has been treated, or worsen as the condition gets worse too.

Disruptive mood dysregulation disorder, which is a mood disorder often seen in pediatric patients, is characterized by at least twelve months of persistent irritable mood and episodes of depression.

Individuals suffering from this condition have more than three outbursts of anger a week, ranging from passive-aggressiveness to destroying property and hurting people. Symptoms usually start before the age of six and must happen independently from the depressive episodes.

If, however, individuals present depressive symptoms that don’t meet the full criteria for any of the disorders above, clinicians can group them in two new disorders.

They all share the same symptoms as major depressive disorder but are distinguished by having a specific trigger, or in the case of atypical depression, unique symptoms.

Postpartum depression is thought to start after childbirth and have symptoms that last up to a month, but in many cases, the onset of depression occurs before childbirth, so a more accurate term is depressive disorder with peripartum onset. In other words, the onset happens during pregnancy or the four weeks following delivery.

The exact cause isn’t understood, but it’s likely related to changes in estrogen and progesterone levels, along with the emotional and physical stress that can accompany the birth of a child.

Atypical depression has two unique symptoms. One is mood reactivity, and it’s when they have an improved mood when exposed to pleasurable or positive events.

Another is rejection sensitivity and it’s when they feel anxious and overreact at the slightest evidence of rejection.

Next up is seasonal affective disorder, where, symptoms appear during cold seasons due to a decreased exposure to sunlight, which also seems to improve them.

Diagnosis requires at least two depressive episodes to have occurred during cold months for the past two years.

Now let’s switch gears and look at the other end of the spectrum, which includes conditions characterized by manic or hypomanic episodes, like bipolar I, II and cyclothymia.

A manic episode lasts for at least a week and is a state where at least three of the following seven symptoms should be present.

First, individuals might feel an inflated self-esteem or grandiosity.

Third, they might feel an urgency to keep talking.

Fifth, they might feel easily distracted or might pay excessive attention to irrelevant things, which might make a person move from one task to another without finishing any of them.

Sixth, they might feel the need to achieve certain things, for example, an individual might spend more than twenty hours a day on social media just to reach a certain number of followers.

A hypomanic episode, on the other hand, includes a milder version of at least three of the same symptoms, and it lasts at least four days.

It’s important to distinguish between bipolar I, bipolar II, and cyclothymia.