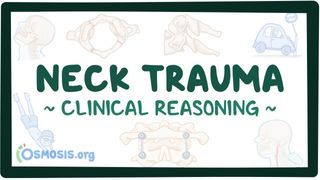 The neck is a compact tube packed with many vital structures including blood vessels like the carotid artery and internal jugular vein, nerves like the brachial plexus, parts of the airway like the larynx and trachea, and parts of the digestive tract, such as the pharynx and esophagus. As a result, even seemingly innocuous traumatic injury can be lethal.

Before delving into penetrating neck injuries, it’s crucial to review the anatomy. The neck is anatomically divided into three zones.

To help you remember the order of the zones, think of going up an elevator, so zones I, II, III from bottom to top.

The neck is enveloped by the superficial and deep cervical fascia, and sandwiched between them is the platysma muscle.

Penetrating neck injury is most often caused by gunshot wounds and stab wounds.

The evaluation of penetrating neck injury starts before a person goes to the hospital.

Importantly, impaled objects should not be removed at the scene and the neck should be kept as steady as possible during any movement of a person.

At the hospital, management begins with the ABCs; airway, breathing, circulation.

The airway is the highest priority in any person with neck trauma. Early orotracheal intubation should be performed, even if it seems like the individual is maintaining their airway. That’s because rapid compromise of the airway can occur, so it’s better not to wait.

If orotracheal intubation fails or is contraindicated, such is in the case of massive facial trauma or laryngotracheal injury, then an emergent cricothyrotomy should be performed.

Take caution when attempting to perform bag-mask ventilation, because if the airways are injured, then air may dissect into the neck tissue, further distorting the airway.

However, if the individual also suffered concomitant blunt neck injury, or has a neurological deficit, then the risk of cervical spinal cord injury is high, and a cervical collar should be placed, but only after the neck injuries were addressed and treated.

As for breathing, the neck fascia in zone I is continuous with the mediastinum. So injury to zone I can potentially cause a pneumothorax. A chest x-ray may be performed if this is suspected.

Okay, on to circulation. Visible bleeding should be controlled by direct pressure using one gloved finger on the source. It might seem intuitive to push your whole palm on the bleeding, but doing that might compromise blood flow to the brain. Also, do not probe or explore an actively bleeding wound initially, because you might accidentally dislodge a clot, causing the bleeding to continue.

If applying pressure fails to control the bleeding, then it’s time to insert a Foley catheter right into the wound. Inflating the Foley catheter balloon will help tamponade the hemorrhage.

Also, vascular access should be obtained on the side opposite to the side of injury.

Now let’s say the internal jugular vein had a hole it, and was exposed to the atmospheric air. This could potentially cause a venous air embolism that can travel down to the right heart and occlude the pulmonary circulation, causing shock.

Therefore, we place the individual in a Trendelenburg position, which is a supine position with the feet above the level of the head. This causes any air embolism to float into the apex of the right ventricle, preventing occlusion of the pulmonary circulation.

All right, during the evaluation, hemodynamically unstable individuals - those with a weak pulse, hypotension, or shock, are taken to the operating room immediately.

Hemodynamically stable individuals are assessed for “hard signs” of penetrating neck injury to the respiratory, digestive, or neurovascular structures. These include air bubbling from the wound, subcutaneous emphysema; which is air under the skin, stridor, a rapidly expanding or pulsatile hematoma, an audible vascular bruit, active brisk bleeding, and massive hemoptysis. If any one of these are present, then the airway should be secured, and the individual should immediately be taken to the operating room.

If these “hard signs” aren’t present, then we look for the “soft signs” of penetrating neck injury like dysphagia, hoarseness, minor hemoptysis, or hematemesis, or a non-pulsatile non-expanding hematoma.

Individuals with “soft signs” are managed based on the neck zone involved.

When approaching zones, it’s important to consider the possibility that an injury may traverse multiple zones.

For example, although an external gunshot wound might be perfectly positioned in let’s say zone I, the bullet trajectory might go through zone II or III.

Anatomically, zone I and zone III injuries are difficult to access surgically so a CT angiogram is done to evaluate for injuries.

Now, if the CT angiogram findings are equivocal and there’s still suspicion of laryngotracheal or pharyngoesophageal injuries, then esophagoscopy and bronchoscopy may be performed. Another option is a contrast esophagram, which looks for leakage of gastrografin contrast from the esophagus or pharynx, indicating injury.

Gastrografin is preferred over barium because should there be contrast leakage, and gastrografin is less irritating to the mediastinum.

On a similar note, if an esophageal injury is suspected, then broad spectrum antibiotics such as piperacillin-tazobactam should be started. This is because the bacterial flora in the esophagus can invade the mediastinum, resulting in mediastinitis.

Similar to any trauma, the evaluation of blunt neck injury starts with the ABCs. Additionally, an emphasis is placed on maintaining immobilization of the C-spine until injury is ruled out.

The idea of immobilizing the neck is that you don’t want to exacerbate any potential pre-existing injury of the spinal cord, which can be specifically life-threatening in C-spine injury. That’s because the cardiac and respiratory control centers originating from the medulla extend down to the upper cervical levels.

Now, if the individual is going to be intubated, then someone must stand at the head of bed, and manually hold the head from both sides to maintain immobilization. This is called manual in-line stabilization of the C-spine.

Once the airway is cleared, immobilization of the C-spine is maintained by placing rigid cervical collar around the neck.

Cervical collars should not be placed prior to intubation because they obscure your view of the airway making intubation more difficult.

The next step is to “clear” the C-spine of any injuries.

The Canadian C-spine rule is more complex, and accounts for the age of the individual, the mechanism of injury and the range of motion.

On the other hand, the NEXUS criteria states that if the individual does not have a focal neurological deficit, midline cervical spine tenderness, an altered level of consciousness, intoxication, or a distracting injury, then this adequately rules out a C-spine injury.

A distracting injury is a condition that produces pain significant enough to “distract” the individual from the neck injury.

Examples include a long bone fracture, visceral injury, or major burns. However, if any one of these factors are present, then C-spine injury cannot be ruled out clinically, and imaging with a CT scan of the neck should be done.

If the CT scan rules out significant cervical spine injury, then the cervical collar can be safely removed.

Whiplash injury is the extreme hyperflexion and hyperextension of the neck that results from the sudden acceleration-deceleration motion, and it commonly happens in motor vehicle accidents. This results in pain and stiffness of the neck muscles.

Fortunately, whiplash injury is usually benign, however if severe, it can result in cervical spine fractures or ligamentous injury.

Because of how common it is, automobile companies have implemented devices and systems that restrain the head with the hope of preventing whiplash injury.

In stable fractures, the spinal column maintains its stability, and the spinal cord is not at risk of injury.

Unstable fractures require neurosurgical intervention with procedures like spinal fusion, which entails fusing one or more vertebral bodies using plates, rods or screws, with the goal of artificially regaining the lost spinal stability.