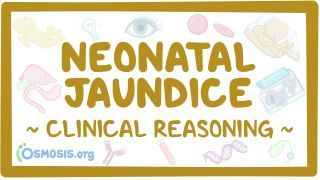 Neonatal jaundice -also called icterus- is the yellowish pigmentation of the skin and sclera that appears when total bilirubin levels rise above the 95th percentile for age, which is usually around 2 mg/dL.

Unconjugated hyperbilirubinemia is almost always a completely normal phenomenon, called physiologic jaundice of the newborn. It’s extremely common and develops in the majority of infants, especially preterm infants, within the first two days to 1 week of life.

At that point, the first thing to do is a Coombs test. This will be positive when mother’s antibodies attack the baby’s red blood cells either due to Rh or ABO incompatibility.

In ABO incompatibility, the most common scenario is that the mother has an O blood group and the baby has an A or B blood type. Typically there are already anti-A and anti-B antibodies present in the mother’s circulation, even without any sensitization from a prior pregnancy. This is because A and B antigens are similar to common environmental antigens, such as bacteria, dust, or pollen, which is present all around, so exposure to these antigens results in the generation of anti-A and anti-B antibodies. So these antibodies cross the placenta and cause hemolysis right away in the first pregnancy.

Okay, now, if the Coombs test turns out negative, then we need to check the hemoglobin level.

If the hemoglobin level is low, typically below 13.5 grams per deciliter, there may be a blood collection outside the blood vessels, for example, a cephalohematoma due to trauma during delivery, which then breaks down and gets resorbed as bilirubin.

If the hemoglobin is high, typically above 22 grams per deciliter, then the increased load of RBCs, may slowly be getting broken down, resulting in an increased production of bilirubin. This is common in babies of diabetic mothers, but can also occur when there’s a transfusion, like twin-twin, maternal-fetal transfusion or delayed cord clamping.

Bear in mind, though, that haptoglobin measurements are not so reliable in newborns, since in up to 90% of healthy newborns haptoglobin is below detectable levels.

Specifically, hemoglobin electrophoresis in a healthy newborn will consist of two fractions: HbF 80% and HbA 20%. In case of sickle cell disease HbA will be absent and substituted by HbS, while in β-thalassaemia major HbA will be also absent but substituted by nothing.

Now, if reticulocytes, LDH, and haptoglobin are all normal, then jaundice is usually associated with breastfeeding - and it’s called breastfeeding jaundice.

Breastfeeding jaundice has an early onset, within the first 7 days of life, and is caused by insufficient quantity or frequency of feedings, because of difficulty in feeding, or because the mother has an inadequate milk supply.

Decreased milk volume causes the bowels to be less stretched and that slows down the gastrointestinal tract and less excretion of conjugated bilirubin in the stool.

As the baby begins to take more breast milk, the problem usually fixes itself. If the infant has a decline in weight gain, particularly if the infant loses more than 7 percent of their birth weight, or there are fewer than three small stools a day, formula may be needed to supplement breastfeeding.

Breast milk jaundice is caused by substances within the milk itself, such as non-esterified free fatty acids or metabolites of progesterone, which inhibit the enzyme glucuronyl transferase, which converts unconjugated to conjugated bilirubin in the liver. Continued breastfeeding is recommended.

Breastfeeding may be temporarily interrupted if bilirubin levels exceed 20 milligrams per deciliter.

Now, there are also very rare hepatocellular causes of unconjugated hyperbilirubinemia, and here the reticulocytes, LDH, and haptoglobin can also come back normal.

In both cases, the diagnosis can be confirmed with genetic testing. There is no specific treatment required for these syndromes

Alright, now, unconjugated hyperbilirubinemia is usually benign, but it can cause complications if the amount of unconjugated bilirubin rises a lot.

Since unconjugated bilirubin is fat-soluble, it can cross the blood-brain barrier and deposit in the basal ganglia, leading to the kernicterus.

Kernicterus can cause symptoms like lethargy and poor feeding and can progress to stupor, hypotonia, seizures, and even death.

Treatment of severe unconjugated hyperbilirubinemia is phototherapy, which uses blue-green light, in the range of 460-490 nm, to convert the water-insoluble unconjugated bilirubin molecule into a more water-soluble form, called lumirubin, which cannot cross the blood-brain barrier, and can be excreted in the bile and urine of the baby, without having to undergo conjugation in the liver.

Specifically, for full- term and late preterm neonates, indications of phototherapy vary, depending on their risk of severe hyperbilirubinemia, which is determined by their gestational age and specific risk factors that include isoimmune hemolytic disease, glucose-6-phosphate dehydrogenase or G6PD deficiency, asphyxia, lethargy, temperature instability, sepsis, acidosis, or albumin lower than 3 grams per deciliter.

Neonates born earlier than 35 week of gestation are at a greater risk of kernicterus, so the threshold bilirubin levels for phototherapy are slightly lower. And the more preterm the infant, the lower the threshold.

During phototherapy administration, the eyes should be shielded, and the neonate should be closely monitored to prevent overheating or skin burns.