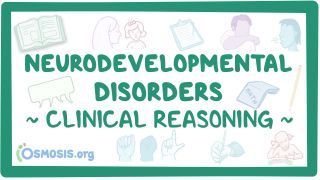 Pediatric neurodevelopmental disorders cause developmental deficits in areas like movement, language, and cognition, which can interfere with how a person functions independently in society.

In some cases there are specific genes that are thought to play a role. But there are also a number of environmental risk factors like maternal use of alcohol, tobacco, or illicit drugs during pregnancy; preterm birth; and prenatal or childhood exposure to environmental contaminants like lead.

Now the range of deficits can vary from a tic disorder that affects facial movements to global impairments in language and cognition.

Sometimes, there are deficits and delays in achieving development milestones like having fluent speech by age 6.

The neurodevelopmental disorders frequently co-occur; for example, individuals with autism spectrum disorder often have cognitive disability, and many children with attention-deficit/hyperactivity disorder or ADHD also have a learning disorder. Usually the symptoms occur in the early developmental period, but sometimes they’re not fully seen until a person is older like in some learning disorders.

The most commonly diagnosed neurodevelopmental condition is autism spectrum disorder which causes three types of deficits.

First is deficits in social-emotional reciprocity, ranging from a difficulty with normal back-and-forth conversation to completely failing to initiate and respond to social interactions.

And third is deficits in developing, maintaining, and understanding social relationships, which includes adjusting behavior to suit a specific context, to difficulties with making and keeping friends.

In addition to these deficits, individuals have restricted and repetitive behaviors, interests, and activities, and that’s evidenced by the fact that they have at least two of the following four symptoms.

First, there are stereotyped or repetitive motor movements like eye twitches, use of objects, or speech.

Second, individuals can be inflexible when it comes to change, or might show ritualized patterns of verbal or nonverbal behavior, like always facing one direction when they play.

And fourth, they show hyper- or hypo reactivity to specific sensory stimulation, like being indifferent to pain or getting extremely upset by the sound of rain.

And finally, the symptoms must not be better explained by intellectual disability or global developmental delay where social experiences are not usually significantly impaired relative to a person’s nonverbal skills.

Second is ADHD. Individuals can have either inattention or hyperactivity and impulsivity, or both. And the behaviors are out of proportion for what’s usually seen at that person’s developmental level, negatively impact them, and persist for at least six months.

In children, inattention is when there are at least six of the following nine symptoms. For individuals over 17 years old, at least five symptoms are required.

Second, they have difficulty sustaining attention.

Third, they often don’t seem to listen when spoken to directly.

Fourth, they don’t follow instructions and fail to finish chores such as homework.

Fifth, individuals find it hard to organize tasks and activities.

Sixth, they dislike or avoid being part of tasks that require sustained mental effort like solving a riddle.

Seventh, they lose things required for tasks like pencils and books.

And ninth, individuals are usually forgetful in daily activities.

In children, hyperactivity and impulsivity is shown by at least six of the nine symptoms, or five out of nine for individuals over 17 years old.

First, individuals often fidget, tap their hands or feet, or squirm in their seat.

Second, they spontaneously get up in situations where remaining seated is expected like in a classroom.

Third, they often run around or climb when it’s inappropriate.

Fourth, they don’t usually play or have fun quietly.

Fifth, individuals are often “on the go,” and can’t stay still for a long time.

Seventh, they often blurt out answers before a question has been fully asked.

Eighth, they have difficulty waiting their turn.

And ninth, they often interrupt others.

In addition to all of this, individuals with ADHD have symptoms prior to age 12 years and have symptoms in at least two settings like at work and with family. Also, the symptoms should not occur exclusively during a psychotic disorder or be better explained by another mental disorder.

Third is a specific learning disorder. Individuals have at least one of the following six symptoms for over 6 months, in spite of getting help for the difficulty.

The first is inaccurate or slow word reading.

Second, difficulty understanding the meaning of what is read.

Fourth, difficulty with written expression - like making lots of grammatical or punctuation errors or having poor paragraph organization.

Fifth is difficulties with concepts related to numbers or doing simple calculations with single-digit numbers.

And sixth, individuals have difficulties with mathematical reasoning like dividing or multiplying.

Often the learning difficulties begin during school-age years, but aren’t fully recognized until a person has to apply a certain skill like taking a timed test or writing a complex report.

And lastly, the learning difficulties shouldn't be better explained by intellectual disabilities, vision or hearing problems, or other health issues.

Now, the term dyslexia is sometimes used when a person had trouble with word recognition, poor text understanding, or difficulty spelling - and these individuals should be assessed to see if they have any additional difficulties.

These deficits are confirmed by clinical assessment as well as by standardized intelligence tests like the Wechsler Intelligence Scale for Children. Typically, individuals with intellectual disability score two standard deviations or more below the mean. So on tests with a standard deviation of 15 and a mean of 100, that means a score below 70.

Another type of intellectual disability is a global developmental delay, which can occur in children under the age of 5 years and fail to meet developmental milestones in at least two areas of intellectual functioning which consists mostly of the person’s mental abilities such as the ability to reason, plan, think, and communicate. These individuals are often too young to undergo standardized assessments like the Battelle Developmental Inventory - so they require reassessment after a period of time, usually during their early school years.

The fifth category, communication disorders, is characterized by deficits in language, speech, and communication. Assessments must take into account the individual’s cultural and language context, particularly for those growing up in multilingual environments.

The difficulties shouldn't be attributable to medical conditions like hearing loss, and shouldn’t be better explained by intellectual disability or global developmental delay, where the language deficits are due to intellectual limitations.