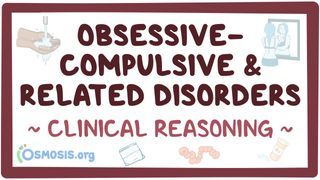 We all have unwanted thoughts at times that we can’t just shake off. And we also have things we want to do only in a particular way - no matter if we’re talking about washing dishes or superstitions.

But individuals with obsessive-compulsive disorder or OCD and related disorders, like hoarding disorder, experience these obsessive ways of thinking and acting in such an extreme way that it causes distress and begins to negatively impact their lives.

The causes of obsessive-compulsive disorders are not fully understood, but there are a number of risk factors.

Biological factors include hormonal imbalances, neurologic conditions, and having a family history of OCD, confirming a genetic component.

Now, according to DSM-5, the most common disorder is obsessive-compulsive disorder.

In terms of symptoms, the group is mainly characterized by obsessions and compulsions.

Obsessions are repeated, persistent, and unwanted thoughts, urges, or mental images that are intrusive and cause distress or anxiety.

They are hard to get rid of and usually disappear only after performing a certain action or series of actions called compulsions.

Compulsions are repetitive actions like hand washing or mental acts such as praying, counting, or repeating words silently that the individual feels driven to do in response to an obsession or according to this dreaded feeling that some rule must be applied no matter what.

Performing these actions reduces anxiety or distress because individuals feel that if they don’t perform them, something horrible will happen.

For example, a person might be excessively concerned about cleanliness or about becoming ill - which is the obsession, and that concern melts away when the person cleans the doorknob three times in a row - the compulsion.

Under extreme stress, individuals sometimes exhibit paranoid and delusional behaviors including a tendency to overestimate threats, becoming intolerant of uncertainty, or believing that having a forbidden or bad thought is just as bad as acting on it.

The conditions are often associated with depression and anxiety, and more than half of individuals have suicidal thoughts as well.

Avoidance behavior is also common, with people avoiding other people, places, or the things that trigger their obsessions and compulsions.

For example, individuals with concerns about contamination might avoid public restrooms to reduce exposure to germs and those with intrusive and often violent thoughts may avoid social interactions.

Obsessive-compulsive disorder is the most studied of the conditions.

The first diagnosis element is the presence of obsessions or compulsions - or both. Usually, the obsession and compulsions revolve around themes like cleaning, wanting to ensure symmetry, or wanting to avoid harm.

Secondly, these irrational ideas or impulses must repeat themselves to the point where the individual is unable to function in settings like school, work, or in personal relationships.

The obsessions and compulsion are unwanted, they don’t bring any satisfaction or pleasure, and are usually resisted.

But because these so-called “ritualistic behaviors” alleviate anxiety, they continue.

Thirdly, the obsessions and compulsions must be time-consuming, taking up more than an hour per day, and should cause significant distress.

Lastly, the symptoms shouldn't be caused by a substance, medication or another condition.

It should be noted that the degree to which a person believes that their obsessions and compulsions are excessive can vary over time.

The first diagnosis element is that individuals have a hard time letting go of objects, regardless of its value.

Secondly, this difficulty of giving up broken or purposeless items should be the result of a strong need to save objects and of the distress associated with discarding them - even if they are broken beyond repair.

Next, individuals with hoarding disorder must end up cluttering their living space to such an extent that they often don’t have enough space to move about freely.

Hoarding prevents individuals from functioning within society, causing impairment in social, occupational, or other settings. This distinguishes hoarding disorder from normal collecting.

The key thing that distinguishes it from the other disorders - is the preoccupation with one or more perceived defects or flaws in appearance.

In most cases these defects aren’t seen by others or are only minor and exaggerated flaws like small birthmarks.

Secondly, this preoccupation should result in behaviors such as mirror checking the flaw, excessive grooming, reassurance seeking from friends, family and even strangers, or mental acts like comparisons with peers and celebrities.

Fourth, there’s trichotillomania or hair-pulling disorder which is when individuals pull their hair, causing hair loss and impairment.

For diagnosis, the individual must have tried to stop pulling their hair repeatedly.

Secondly, the hair pulling and hair loss should not be attributable to another medical or psychological condition.

The hair pulling usually causes a relief from anxiety or boredom, but also causes good feelings like pleasure and gratification.

Fifth, there’s excoriation or skin-picking disorder, which is where recurrent skin picking leads to skin lesions.