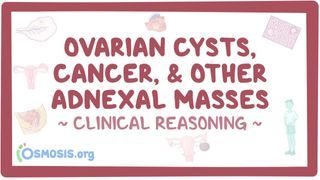 Transcript for Ovarian cysts, cancer, and other adnexal masses

Adnexal masses can affect the ovary or the fallopian tube. They can develop in females of all ages, and can be discovered incidentally during a pelvic ultrasound, or when they cause symptoms like pain or pressure on the affected side.

When encountering an adnexal mass the first step is to assess whether or not it’s a medical emergency, and, if it’s not, whether the mass is benign or malignant.

Medical emergencies are adnexal masses that cause severe and abrupt pain, along with other symptoms like nausea, vomiting, fever, or vaginal bleeding.

In addition, any kind of pelvic pain or bleeding in a pregnant female during her first trimester is considered a medical emergency - so the first step is to get a pregnancy test.

If the pregnancy test is negative, the likely causes are ovarian torsion, a ruptured ovarian cyst, and a tubo-ovarian abscess.

In ovarian torsion, the ovary twists around the suspensory ligament, which suspends the ovary and contains the ovarian blood vessels within it.

Risk factors include an ovarian mass - like a cyst or cancer, and an ovary greater than 5 centimeters in diameter.

In both cases, twisting the vessel cuts of the blood supply to the ovary - causing ovarian ischemia.

An ultrasound may show that one ovary is larger than the other one, because of edema and blood pooling up in the ovarian veins, and the affected ovary might look like a twisted mass.

A Doppler ultrasound shows decreased or absent blood flow within the ovary, and the “whirlpool sign” may be present, which is when blood flow inside the ovarian vessels seems to flow in a spiral around a central axis.

Urgent surgical detorsion of the ovary is required to avoid ischemic injury and loss of the ovary and fallopian tube.

Ovaries that are hemorrhagic or edematous are more likely to be viable, than necrotic appearing ovaries.

If the ovary can’t be saved, a unilateral salpingo-oophorectomy is often done. That’s where the affected ovary and fallopian tube are removed.

With a ruptured ovarian cyst, females have abrupt and severe pain, that either occurs spontaneously or, more frequently, following sexual intercourse.

Following cyst rupture, there may be bleeding into the peritoneum.

If there’s minor bleeding, then it doesn’t affect the hemodynamic status or hematocrit. In this case, NSAIDs are given to help with the pain, and symptoms resolve in a few days.

On the other hand, if there’s major bleeding, it can cause peritoneal irritation, like muscle guarding and abdominal tenderness. A transabdominal ultrasound will show blood in the peritoneal cavity. Individuals with stable vital signs should be hospitalized and given IV fluids, and get closely monitored for vital sign changes and drops in their hematocrit. If there is hemodynamic instability, or if the hematocrit continues to fall, then surgery is recommended to stop the bleeding and remove the cyst.

Another emergency is the tubo-ovarian abscess - which is when an infection of the fallopian tube or the ovary leads to an abscess - a “pocket of pus”. Most commonly, they occur in females with a history of pelvic inflammatory disease. Individuals typically present with acute lower abdominal pain, fever, chills and sometimes vaginal discharge.

The adnexal mass is typically tender and painful on palpation. Additionally, females have a high white blood cell count, and a pelvic ultrasound typically shows a complex mass that obliterates normal adnexal architecture.

In premenopausal females who are hemodynamically stable and have a mass smaller than 9 centimeters, IV antibiotic therapy is recommended for at least two weeks, until the abscess has resolved on ultrasound.

If there’s evidence of intra abdominal rupture of the abscess, like hemodynamic instability, acidosis, or an acute abdomen, then emergency surgery should be done. That’s where the abscess is drain and debrided, and the peritoneal cavity is irrigated to wash-out the infection.

After that a unilateral salpingectomy and oophorectomy is usually performed in most females, which preserves fertility.

In acutely ill females who are done with having children, a total abdominal hysterectomy and a bilateral salpingo-oophorectomy can be done.

Now, let’s say that the urine pregnancy test comes back positive. In this case, there may be an ectopic pregnancy, which is when the embryo implants somewhere other than in the uterine cavity - most frequently in the ampulla of the fallopian tube. Pain and vaginal bleeding typically begin 6 to 8 weeks into the pregnancy.

For diagnosis, a serum HCG can be measured - and if it’s above 2000 milli international units or milliunits per milliliter, then the pregnancy- either intrauterine or ectopic - can be seen on transvaginal ultrasound.

Methotrexate can be used in females who are hemodynamically stable, who have a serum HCG below 5000 milli international units per milliliter, and when the ectopic pregnancy is less than 3 to 4 centimeters on ultrasound, and there’s no fetal cardiac activity.

Methotrexate isn’t used in females with liver and renal dysfunction, or with an abnormal complete blood count.

Methotrexate is given in an initial dose of 1 milligram per kilogram, and one or two additional doses may be given, until serum HCG levels are undetectable.

If at any point, the female becomes hemodynamically unstable or if there are signs of a ruptured ectopic pregnancy, then emergency surgery should be done.

Following salpingectomy, a single HCG measurement is done postoperatively, to make sure that the level falls.

Following salpingostomy, HCG should be measured weekly until the level is undetectable.

On the other hand, if serum HCG level is below 200 mill international units per milliliter, and if it decreases by more than 10% between two consecutive measurements, then that suggests a spontaneous termination of the presumed ectopic pregnancy, and expectant management is an option.

That’s where the serum HCG is checked three times, every 48 hours, and then weekly until the level is undetectable. If the serum HCG stops falling, or if it starts increasing instead, then other treatment options, like surgery or methotrexate, should be considered.

Ok, now let’s look at non-urgent adnexal masses. Most are asymptomatic, benign ovarian masses; but they can sometimes cause pain or pressure on the affected side, and can occasionally be malignant.

Broadly speaking, ovarian masses are either simple or complex cysts.

On an ultrasound, simple cysts are usually less than 10 centimeters, have thin, regular walls, are unilocular, meaning they have a single cavity, and are filled with an anechoic fluid - so they look like a balloon filled with black fluid. That fluid is also homogenous, meaning nothing is floating around in it.

Simple cysts are benign, and the classic example is a follicular cyst, which forms when the dominant follicle fails to rupture at ovulation, and instead continues grows and fills with fluid. These cysts require no treatment, and go away on their own in a couple of months.

However, when they are larger than 3 centimeters, they should get followed with a repeat ultrasound in 3 to 6 months. If the cyst grows during this time, or causes significant discomfort, it may need to be surgically removed.

Next, there are the corpus luteum cysts.

Normally, after ovulation, the follicle remnants become the corpus luteum, which regresses during the luteal phase.

If instead of regressing, the corpus luteum continues to grow, then the arteries nourishing it can rupture and hemorrhage into the cyst.

So corpus luteum cysts are also called hemorrhagic cysts. They can look like simple cysts, but more often the blood within them clots in a way that gives them a “spider web” appearance on ultrasonography.

Doppler ultrasound might show blood flowing around the cyst, sometimes called the “ring of fire”, but not inside the cyst. A repeat ultrasound is usually done in about 3 months, and by that time, the blood is usually resorbed, and the cyst goes away on its own.

Now, complex cysts, on the other hand, are larger than 10 centimeters, have irregular borders, and have internal septations creating a multilocular appearance. The fluid inside these cysts is usually heterogeneous, meaning there’s something other than fluid inside it.

One type of benign complex cyst is the endometrioma, which occurs in endometriosis, and it’s where endometrial tissue grows on the ovary.

Symptoms include dysmenorrhea - or painful menstrual periods, dyspareunia - or pain during sex, and on ultrasound, endometriomas have a “ground glass” internal appearance.

Endometriomas that are smaller than 5 centimeters can be followed-up with an ultrasound every 6 months for one or two years, and after that annually.

Endometriomas larger than 5 centimeters, or those that cause significant symptoms, are typically removed via laparoscopic cystectomy.

At surgery, endometriomas are sometimes described as “chocolate cysts” - because they contain a brown, tar-like fluid.

Epithelial ovarian cancer derives from the surface epithelium of the ovary, and it accounts for over 90% of ovarian tumors.

Just something to keep in mind - epithelial ovarian carcinoma, fallopian tube carcinoma, and peritoneal carcinomas are staged and treated in the same way, so they’re considered a single clinical entity. There’s also growing evidence that they have a common pathogenesis - so when we say “epithelial ovarian cancer”, we’ll be referring to all three of them.

Ok, so risk factors for these cancers include being a postmenopausal female, having endometriosis or polycystic ovarian syndrome, and never having been pregnant.

There are also genetic risk factors like BRCA1 or BRCA2 gene mutations, which carry an increased risk for both ovarian and breast cancer.