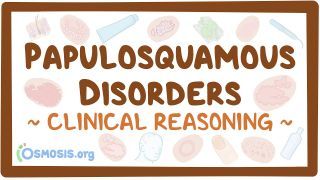 Papulosquamous disorders are a heterogeneous group of disorders whose etiology primarily is unknown, that present with both red papules and scaling.

The major entities in this group include psoriasis, parapsoriasis, lichen planus, pityriasis rosea, and seborrheic dermatitis.

Diagnosis is most often clinical, taking into account the location and distribution of the papulosquamous skin lesions. Only a few cases may require further investigation with skin biopsy to confirm diagnosis and choose the appropriate treatment.

Psoriasis is a chronic and complex immune-mediated disease that causes skin inflammation, presenting as well-demarcated, erythematous plaques with silver scales that can be incredibly pruritic or itchy.

For some individuals, having psoriasis may have psychosocial effects with a significant negative impact on the quality of life.

The causes of psoriasis aren’t clear but there’s definitely a genetic component and environmental triggers like trauma, stress, or smoking.

Symptoms of psoriasis can vary, and there are a few subtypes.

Plaque psoriasis is the most common. It appears as flattened areas of epidermal elevation that are inflamed and red or salmon-colored, from the underlying dilated blood vessels, and are topped with white-silvery scales.

Plaques are typically itchy and found on the scalp and in tensor regions, like the elbows, groin, lower back, and knees.

Guttate psoriasis appears as small, red, individual spots on the trunk and limbs.

This subset usually starts in childhood, and is sometimes triggered by an infection, like strep throat.

Inverse psoriasis appears as smooth and shiny red lesions that lack scales and typically form within skin folds like in the genital region, under arms or under the breasts.

Pustular psoriasis appears as areas of red skin with small, white elevations of cloudy pus, formed from dead immune cells. They are usually tender and form on the hands and feet.

Erythrodermic psoriasis is usually the most severe subset, and appears as fire-red scales that can cover a large area of the skin. They are often extremely itchy and painful and fall off in large sheets.

Nail pitting, shallow or deep holes in the nails, may appear in any subset, as well as psoriatic arthritis, which manifests as inflammation in the joints.

The diagnosis is typically based on the distribution of the skin lesions. If the clinical diagnosis is uncertain, a skin biopsy can be done to confirm the diagnosis by looking for classic changes in the skin, which are mostly due to keratinocyte hyperproliferation.

This includes epidermal hyperplasia that is regular or uniform in degree, parakeratosis which refers to the retention of nuclei in the stratum corneum, infiltration of neutrophils in the stratum corneum and epidermis, a thinned or absent granular cell layer of the epidermis, thinning of the suprapapillary dermal plates, and tortuous dilated dermal papillary capillaries due to inflammation.

Treatment for psoriasis can include moisturizers and emollients to help clear psoriatic plaques and minimize itchiness.

Individuals with limited plaque psoriasis may be initially treated with require topical immunosuppressive therapies like topical corticosteroids to dampen the immune response. Alternatives include tar, topical retinoids, topical vitamin D, and anthralin; while for facial or intertriginous areas, corticosteroid sparing agents like topical tacrolimus or pimecrolimus are usually preferred.

On the other hand, individuals with moderate to severe psoriasis may be initially treated with UV phototherapy in addition to topical immunosuppressive therapies, to induce DNA damage in the keratinocytes and halt their proliferation.

Individuals with contraindications to phototherapy or who have failed phototherapy, may get systemic immunosuppressive therapies, such as retinoids, methotrexate, cyclosporine, apremilast, or biologic immune modifying agents like adalimumab, etanercept, and infliximab.

Finally, for some individuals, the psychosocial effects can cause significant feelings of depression or anxiety, especially when there are areas of skin affected by severe psoriasis. Psychological counseling can help sufferers cope with their condition. In fact, there’s a field called psychodermatology which utilizes strategies like anti-anxiety medications, biofeedback, allergy and immune function testing, as well as cognitive behavioral therapy.

There’s also parapsoriasis, which is a group of uncommon dermatoses that are characterized primarily by their resemblance to psoriasis, presenting with erythematous and scaly patches of variable size, chronic course, and poor response to treatment.

In both types, lesions are typically asymptomatic or accompanied by mild pruritus and are predominantly located on the trunk.

Small plaque parapsoriasis is usually asymptomatic and requires minimal or no treatment.

Individuals whose pruritus is not controlled with emollients or who have cosmetic concerns may be treated with topical corticosteroids, and those with poor response to initial treatment may get UV phototherapy.

Mind that small plaque parapsoriasis may persist for years or decades and then resolve spontaneously, but it is considered a benign disorder without malignant potential.

On the other hand, large plaque parapsoriasis is regarded as a premalignant dermatosis with a substantial risk of progression to mycosis fungoides, the most common type of cutaneous T cell lymphoma, so in addition to topical corticosteroids or UV phototherapy, individuals need close clinical monitoring and repeated biopsies over time to monitor for possible progression.

Moving on to lichen planus, lichen means tree moss and planus refers to flat, and the reason it’s called that, is that lichen planus is a flat-topped skin rash that looks a bit like tree moss.

Lichen planus is an immune-mediated disorder targeting the skin, nails, and mucous membranes, such as the oral cavity and genitalia.

Lichen planus can be diagnosed based on its appearance, which can be described using the six P's.

The first p is for planar, meaning that the rash is flat-topped.

The next p is for polygonal, which means that the rash has multiple sides.

The next p is for the purple color of the skin rash.

And the final p is for pruritic, meaning that it’s itchy.