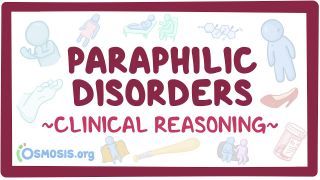 Paraphilic disorders are conditions where there’s a recurrent, intense urge or sexually arousing fantasy that’s distressing or disabling because it involves inanimate objects, children or nonconsenting adults, or suffering or humiliation of oneself or another person.

Psychological factors are thought to play a major role, especially events in childhood that led the individual to associate sexual pleasure with a specific event or object.

Often, a child who is the victim or observer of inappropriate sexual behaviors - including online, learns to later imitate the behavior.

Other causes include childhood sexual abuse, substance abuse, hypersexuality, exhibitionism, and a history of antisocial behavior and sexual anxiety.

Paraphilia refers to a persistent sexual interest in things other than sex or foreplay with physically mature, consenting human partners.

However, for a paraphilia to turn into a paraphilic disorder, there are some additional criteria.

First, in paraphilic disorders the symptoms last for at least 6 months.

Third, the individual must have acted on these unusual sexual urges with a nonconsenting person, or they must cause anxiety, obsessions, guilt, or shame; or impairment in important areas of functioning - including sex.

The other specified and unspecified paraphilic disorder diagnoses can be applied to the various other paraphilias that cause distress or impairment.

In voyeuristic disorder the individual is at least 18 years old and experiences sexual arousal from observing an unsuspecting person who is naked, getting naked, or having sex.

In exhibitionistic disorder, the individual feels sexual arousal from exposing their genitals to an unsuspecting person.

The clinician also has to specify if the individual is sexually aroused by exposing genitals to prepubertal children, to physically mature individuals, or both.

This can help identify a co-occurring pedophilic disorder.

Third, in frotteuristic disorder, there’s recurrent and intense sexual arousal from touching or rubbing against a nonconsenting person.

Fourth, in sexual masochism disorder, there is sexual arousal from the act of being humiliated, beaten, bound, or otherwise made to suffer.

Fifth, in sexual sadism disorder the individual is sexually aroused by the physical or psychological suffering of another person.

Moreover, the individual is at least age 16 years old and at least 5 years older than the child.

Seventh, fetishistic disorder involves sexual arousal from the use of inanimate objects or have a highly specific focus on a nongenital body part like feet.

Also, the fetish objects are not limited to articles of clothing used in cross-dressing as in transvestic disorder or devices specifically designed for tactile genital stimulation.

The diagnosis of transvestic disorder does not apply to all individuals who dress as the opposite sex, even those who do so habitually.

It applies to individuals whose cross-dressing or thoughts of cross-dressing are accompanied by sexual excitement and are emotionally distressed by this behavior or feel it impairs their social or interpersonal functioning.

Regarding treatment, there are psychological approaches, medication, and lifestyle changes that can all help.

Psychological approaches are considered first-line treatment and can include traditional psychoanalysis, hypnosis, and behavior therapy techniques.