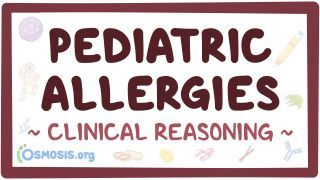 Allergies are an IgE-mediated Type I hypersensitivity reaction against a specific allergen. These include environmental triggers, like viral infections, animal dander, latex, pollen, and insect stings; foods, like nuts, shellfish, and eggs; and medications, like penicillins and sulfonamides. And these usually present first during childhood.

Step one - exposure to the allergen causes allergen-specific IgE antibodies to bind to the surface of mast cells and basophils.

Step two - a repeat exposure to the allergen causes those mast cells and basophils to release proinflammatory molecules like histamine.

Generally, there are acute allergic reactions which resolve within 6 weeks, and chronic allergies which persist for more than 6 weeks.

Among the acute allergic reactions, the most common trigger is a viral upper respiratory tract infection.

One outcome is urticaria, also called hives, which are slightly raised, well-defined wheals that are 1 mm to 10 cm in diameter. They’re usually red, blanch with pressure, are extremely itchy, and can pop up anywhere in the body.

The key feature is that these lesions come and go very rapidly - meaning one might appear on the leg as another disappears from the arm. The reaction involves the epidermis and dermis layers of the skin, and the whole thing typically resolves within 24 hours.

One way is with in vivo skin prick tests, which is where small drops of up to 40 allergens, like pollens, fungi, animal dander, house dust mites, and various foods, are pricked into the skin on the forearm or upper back. After that, if there are signs of urticaria within about 20 minutes, that implies that the substance is a trigger. Unfortunately, it’s a bit uncomfortable and requires that the individual doesn’t take any antihistamines and doesn’t have any other skin disease.

Occasionally, in addition to urticaria an individual might also develop angioedema.

Angioedema is often triggered by foods, latex, or insect stings, but it can also be hereditary, which is caused by deficiency of the complement C1 inhibitor or caused by medications, like ACE-inhibitors.

Angioedema can happen almost anywhere on the skin, like in the hands, feet, trunk and urogenital area, but it’s most common, on the face, like around the eyes or nose. It involves even deeper skin layers, like the subdermis and mucosal layers, like the submucosal tissue.

Usually anaphylaxis symptoms peak within 30 minutes, and then fade, but sometimes there’s a biphasic reaction, where the symptoms resurge again within a day without reexposure to the allergen.

Other times, there might be a protracted anaphylactic reaction which can last for days.

Ιf the child has severe trouble breathing or inspiratory stridor, this is followed by immediate airway management, with intubation or cricothyroidotomy, along with supplemental oxygen.

At the same time, in the case of anaphylaxis, if there is hypotension, fluid resuscitation should be started immediately. Specifically, these children are given boluses of normal saline of 20 mL/kg, each over 5 to 10 minutes, which are repeated as needed. In severe cases, though, large volumes of fluid- up to 100 mL/kg may be required to bring the blood pressure back up to normal.

Before they leave, it’s important that these children should be given epinephrine autoinjectors that they can use right away if there’s a future attack. For children weighing less than 30 kg, an EpiPen Junior Autoinjector is used which delivers 0.15 mg of epinephrine, and for those over 30 kg, an adult EpiPen with 0.3 mg of epinephrine is used.

Now, if symptoms of urticaria or angioedema persist for more than 6 weeks, then it’s considered a chronic allergy. Here, the treatment requires a stepwise approach.

First, a second-generation antihistamine, like 5 mg of levocetirizine or desloratadine, is given on a daily basis. Two weeks later, if symptoms persist, the dose can be increased up to two to four times, so to 10 or 20 mg daily.

Four weeks later, if symptoms persist, then a different second- generation H1 blocker can be given or a first-generation H1 blocker, such as diphenhydramine, chlorpheniramine or hydroxyzine is given. These medications act faster, but they also cross the blood-brain barrier, causing side effects like drowsiness and sedation, as well as antimuscarinic side effects, like dry eyes, dry mouth, urinary retention, and constipation.

In other cases, a histamine H2 blocker, such as cimetidine and ranitidine, may be added. H2 blockers block histamine receptors in the stomach, so they have no direct effect on allergic symptoms. But they also interfere with H1 blocker metabolism by liver enzymes, raising H1 blocker levels in the blood.

Alternatively, other medications can be added, including a leukotriene receptor antagonist, such as zafirlukast and montelukast, or even a three to 10-day burst of oral corticosteroids, such as prednisone or prednisolone.