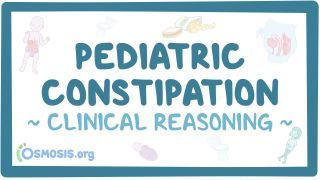 Constipation in children is a decreased stooling frequency or increased difficulty of passing stool, as compared to a child’s baseline.

Normally, full-term neonates pass meconium, which is the very first stool which is usually thick and green-black, within the first 48 hours of life. Premature neonates, meaning those born before the start of the 37th week of gestation, can take a bit longer.

After that, during the first three months of life, infants have about two to four stools a day. By the age of two years, toddlers generally have one or two stools per day. And by age four, children typically have one bowel movement per day.

If a neonate doesn’t pass meconium within the first 48 hours of life, has abdominal distention, refuses to feed, or has bilious vomiting, it should raise suspicion for imperforate anus, meconium ileus, and Hirschsprung’s disease.

About half of the neonates with an imperforate anus also have other congenital anomalies associated with VACTERL syndrome.

So, the next step is to perform a posteroanterior and lateral-view x-ray of the sacrum, called a cross-table x-ray. This can help distinguish between a high-type or low-type defect, meaning that the intestine ends high or low in the pelvis and whether it’s associated with other sacral abnormalities.

In addition, an ultrasound of the spine, heart, abdomen and limbs are needed to look for vertebral, cardiac, renal and limb abnormalities.

Also, an NG tube can be placed and a chest X-ray can be obtained to look for signs of tracheoesophageal fistula and esophageal atresia, like the NG tube coiled in the upper esophageal pouch.

Treatment of an imperforate anus begins with a decompression and aspiration of the contents of the gastrointestinal tract through the nasogastric tube, while giving IV fluids and keeping the infant - NPO - nothing by mouth.

Neonates with a high-type imperforate anus or with other major defects or comorbidities, a perineal anoplasty would be too risky at this point, so they typically have a colostomy first to divert the stool. The child is then able to grow and develop before they are ready for the anoplasty, which usually takes 3 to 6 months. Finally, several months later, after the new anus has matured, the colostomy may be closed.

Meconium ileus is a condition where the meconium is even thicker and stickier than normal, so it gets plugged in the terminal ileum. This most often occurs in neonates with cystic fibrosis, whose GI secretions are extremely viscous.

If a baby is septic, the vital signs show temperature instability - either a fever or hypothermia, tachycardia, tachypnea, and hypotension. And there’s typically a distended and rigid abdomen, and a baby that looks mottled and lethargic.

In a meconium ileus, abdominal x-rays show dilated bowel loops and air-fluid levels proximal to the obstruction, along with a “soap bubble” or “ground glass” appearance at the site of the obstruction due to small air bubbles mixed in with the meconium. There can also be linear or curved calcifications which are a sign of calcified intraperitoneal meconium, in the case of meconium peritonitis.

If the diagnosis is still unclear, then a water-soluble contrast enema can be done, and it would typically show a small-caliber colon or microcolon along with little masses of meconium plugging the terminal ileum.

Treatment of a meconium ileus requires decompression of the gastrointestinal tract through the nasogastric tube, while giving IV fluids. After that, if there’s no perforation and peritonitis, then a hypertonic contrast enema can be given to break up the meconium. If that doesn’t work, or if there’s perforation and peritonitis, then surgery is needed.

Hirschsprung’s disease is also known as congenital aganglionic megacolon. Here, the ganglia, or clusters of nerves of the myenteric or Auerbach’s plexus and the submucous or Meissner’s plexus, which normally coordinate smooth muscle contraction and relaxation, are missing. The rectum and the distal sigmoid colon, which are the areas closest to the anus, are usually affected. Meconium builds up before the obstruction, which causes colon dilation, or megacolon, which in turn is a risk for rupture.

A definitive diagnosis is provided by a rectal suction biopsy of the narrowed area in the colon. During this biopsy, both the mucosa and submucosa are extracted, as opposed to just the mucosal layer because the plexuses are in the muscle layer or submucosal layer.

Treatment is typically surgical resection of the aganglionic part of the intestines. Following this, the healthy end is connected to the anus.

Okay, now, constipation in older children is usually due to functional constipation, meaning that it’s due to dietary factors, like a low-fiber diet and decreased fluid intake or behavioral factors, like anxiety, anticipatory fear of painful stooling, or embarrassment about stooling leading to voluntary holding.