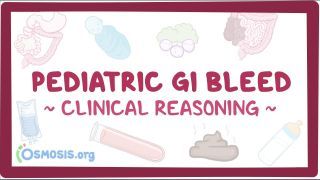 Pediatric gastrointestinal bleeding can be divided into upper and lower GI bleeding.

Okay, first things first. Visible upper GI bleeds may cause blood in the vomit, which might be fresh and bright red, known as hematemesis- and suggests moderate to severe ongoing bleeding, or it might look like coffee- grounds, which suggests that the blood has been oxidized by acid in the stomach so that the iron in the blood has turned black. This is a sign that bleeding was a small quantity or has stopped.

Blood in the stool or diaper may present as black and tarry stools, known as melena, which suggest small quantity bleeding, about 50 milliliters of blood, and that most often results from upper GI bleeding.

If there is fresh, bright red blood passing through the anus which may or may not be mixed with stool, it’s usually lower GI bleeding, known as hematochezia.

In any child with active GI bleed, the first thing to do is evaluate the general appearance, meaning the activity, muscle tone, level of consciousness and skin color, along with hemodynamic stability.

In mild hypovolemia, 3 to 5% of volume was lost, and it causes a slightly dry mouth, increased thirst, and slightly decreased urine output, like one wet diaper or void in six hours.

In moderate hypovolemia, 6% to 9% of the blood volume is lost, and it causes a markedly reduced urine output, with less than one wet diaper or void in six hours, tachycardia, orthostatic hypotension- which is a decrease of over 20 mm Hg in the systolic blood pressure, decreased skin turgor, dry mucous membranes, irritability, delayed capillary refill between two and three seconds, and deep respirations with or without an increase in respiratory rate. In infants, we might also see lack of tears when crying and a sunken open fontanelle.

In severe hypovolemia, over 10% of the blood volume is lost, and it causes anuria, or absence of any urine output, hypotension, a capillary refill of greater than three seconds, cool and mottled extremities, lethargy, and deep respirations with an increase in rate.

Over the next 24 hours, there’s a physiologic compensation of holding onto more water, and intravenous fluids are usually given - and that decreases the hemoglobin level.

In some situations, a nasogastric lavage can be done as well. That’s where a tube is placed down from the nose to the stomach to wash out the gastric contents.

Well-appearing children, are those that are physically active, with a normal muscle tone, posture and level of consciousness, and are hemodynamically stable.

Ill-appearing children, are those that have little or no energy, decreased muscle tone, decreased level of consciousness, or are hemodynamically unstable with signs of hypovolemia.

In these children, two large caliber peripheral IV catheters are placed, and fluid resuscitation begins immediately with 20 milliliters per kilogram of weight of normal saline or lactated Ringer’s solution given over 5 to 10 minutes. This can be repeated, as needed, up to three times in children without improvement, provided there are no signs of fluid overload, such as decreased oxygenation, crackles, gallop rhythm or hepatomegaly.

Blood transfusions may be done if the child remains hemodynamically unstable.

If there’s a suspected upper GI bleed, it’s important to have surgical and interventional radiology teams nearby, because an upper endoscopy can precipitate complications like perforation.

Alternatively, if there’s a suspected lower GI bleed, then nasogastric lavage or upper endoscopy are done, followed by a colonoscopy.

In a neonate below one month of age, maternal blood ingestion is the most common cause of GI bleeding.

Maternal blood can be swallowed during delivery or while breastfeeding, from a fissure in the mother's breast.

To differentiate between maternal and fetal blood, we can use the Apt-Downey test. That’s where a sample of the newborn's stool or vomit is placed in a test tube and hemolyzed to yield free hemoglobin and then mixed with sodium hydroxide.

If the solution turns yellow-brown, the hemoglobin is maternal or adult hemoglobin. If it remains the same color, it’s fetal hemoglobin; so, the newborn is the source of the bleeding. But, if the stool or vomit has been exposed to air longer than 30 minutes, the Apt-Downey test isn’t reliable.

Sometimes, there are fissures in both the anterior and posterior midline, and these are called "kissing fissures".

Primary fissures require no routine workup. But if there’s suspicion of a secondary cause, additional tests may be required like PCR for HIV, dark field microscopy and VDRL or RPR for syphilis and culture or PPD skin testing for tuberculosis.

Now, another cause is food protein-induced allergic proctocolitis. This is triggered by cow’s milk proteins, or occasionally soy proteins, which are found in most infant formulas and can even be transmitted through a mother’s breast milk, if the mother has been drinking cow’s or soy milk herself.

Except for blood in the stool, symptoms can include irritability, back arching during feeding, atopic dermatitis or urticaria, wheezing, cough or vomiting.

To diagnose this in a breastfed infant, cow and soy milk is removed from the mother’s diet. In a formula-fed infant, cow or soy milk containing formula is stopped and an elemental formula, which doesn’t contain any cow milk or soy protein is used instead. After a few weeks, the cow or soy milk is reintroduced for seven days, either by having the mother consume lots of that milk, or by switching back to the old formula. If no symptoms reappear, there’s no milk-protein allergy, but if there are symptoms, then a diagnosis of milk-protein allergy is confirmed and the elimination diet should restart.

One cause is necrotizing enterocolitis, which is where a portion of the intestine, typically the distal small bowel and large bowel, becomes ischemic and dies - typically due to inflammation from infectious pathogens. It’s most common in premature babies weighing less than 1500 grams, but can also occur in term and near-term babies.

A risk factor for necrotizing enterocolitis is formula-feeding, possibly due to loss of protective immunity and bacteria of breastmilk, causing alterations in the flora of the bowel. It typically occurs after the first week of life and symptoms include poor feeding, bloating, bilious vomiting, and bloody stools.

On physical examination, there can be abdominal distention from a right lower quadrant mass, abdominal wall erythema, tenderness, visible intestinal loops, and decreased bowel sounds. At late stages, the baby might go in shock, with bradycardia, apnea, and hypotension.

Diagnosis is made with an abdominal radiograph, which shows multiple loops of dilated bowel, along with the pathognomonic pneumatosis intestinalis. That’s air in the bowel wall produced by gas-forming bacteria. Sometimes, the air extends into portal vein.

Labs can show hyponatremia due to "third spacing" of fluid, metabolic acidosis due to build-up of lactic acid from ischemic bowel injury, thrombocytopenia due to disseminated intravascular coagulation, and neutrophilia or neutropenia due to sepsis. Blood cultures should be obtained to look for the causative pathogen.

In Stage I, necrotizing enterocolitis is only suspected.

It’s divided into stage IA, which includes mild symptoms like an unstable temperature, mild abdominal distension, occult blood in the stool, and normal or non-specific radiographic findings of bowel dilatation.

In stage IB, there’s also gross blood in the stool.

In Stage IIA, the diagnosis is now definite. The baby has absent bowel sounds or abdominal tenderness and radiographic findings like pneumatosis intestinalis.

In stage IIB, there are also lab changes such as metabolic acidosis and thrombocytopenia, and findings like abdominal cellulitis and right quadrant mass, and sometimes radiographic findings of gas in the portal vein.

And finally, Stage IIIB is when there’s evidence of bowel perforation seen as pneumoperitoneum, meaning free air in the peritoneal cavity, on an Xray.

Management includes discontinuing enteral feeds and switching to parenteral nutrition, which may require a central venous catheter, along with gastric decompression with a nasogastric tube to provide bowel rest. Empiric broad-spectrum antibiotics, such as ampicillin, gentamicin and metronidazole, are also initiated.

In stage IIIA, fluid replacement and inotropes are often needed, along with supplemental oxygen and mechanical ventilation.

In stage IIIB or if there’s progressive deterioration, such as worsening metabolic acidosis, severe and persistent thrombocytopenia, rising leukocytosis or declining leukopenia, surgical resection of the affected sections of bowel is also indicated.

Next, there’s intestinal malrotation with volvulus, which is where there’s twisting of the mesentery around the superior mesenteric artery leading to intestinal obstruction, infarction, and necrosis. This causes acute, bilious vomiting, abdominal distention and bloody diarrhea.

In fact, bowel infarction can also damage the intestinal wall and allow the bacteria in the gut to move into the body, which can cause sepsis.

Diagnosis is usually made with ultrasound or with an abdominal X-ray in an upright position, which will show distended loops of bowel with air-fluid levels. That’s followed by an upper GI contrast series, which shows a corkscrew-like or spiral shaped duodenum in the right lower quadrant instead of the left upper quadrant.

Emergency surgery, known as a Ladd procedure, should be performed, which is where necrotic bowel is resected and reoriented within the abdominal cavity.

Moving on to infants over 1 month and young children up to 5 years old, GI bleeding is most commonly due to infectious colitis, Meckel’s diverticulum, or intussusception, and more rarely, due to peptic ulcer disease, juvenile polyposis, or arteriovenous malformations.

Infectious colitis is typically caused by bacteria, like Shigella, Salmonella, Yersinia, Campylobacter, Enterohemorrhagic E Coli 0157:H7 - SSYCE, and Clostridium difficile, but can also be caused by viruses, like CMV, and parasites, like Entamoeba histolytica.

There’s usually acute, bloody diarrhea, lasting up to a week, along with fever, abdominal pain, and cramps. E Coli 0157:H7 can also lead to hemolytic uremic syndrome, which is a life- threatening disease characterised by microangiopathic hemolytic anemia, thrombocytopenia, and renal failure.