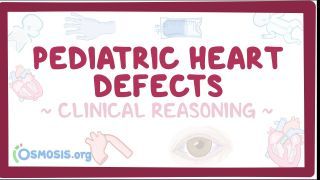 Congenital heart defects are usually divided into two categories based on the presence or absence of cyanosis, as well as by how it sounds on cardiac auscultation.

Usually the diagnosis is then confirmed by echocardiography.

An ECG should be performed as part of the initial work-up.

Chest x-ray is important when there’s suspicion of heart failure, and, sometimes a CT or MRI are done if the diagnosis is inconclusive.

Rarely, cardiac catheterisation with angiography is used if the diagnosis remains uncertain after non-invasive studies.

Regarding infective endocarditis prophylaxis, it is recommended for high risk individuals: those with a cyanotic congenital heart disease that has not been fully repaired; a congenital heart defect that's been completely repaired with prosthetic material or a device for the first six months after the repair procedure; repaired anomalies with residual defects, such as persisting leaks or abnormal flow.

In the first two days of life, a pulse oximetry saturation less than 90% in the right hand or either foot requires urgent echocardiography.

If the saturation is 90% to 95% in either location or if there’s a saturation difference greater than 3% between the right hand and either foot, the test should be repeated hourly, and it’s positive three times, then echocardiography should be done.

In acyanotic defects, the high-pressured left-sided systemic blood gets shunted to the right-sided pulmonary circulation.

Because this extra blood is already oxygenated, there’s no issue of cyanosis, but it does add increase the pulmonary flow and that leads to pulmonary hypertension.

In some cases over a long period of time, the pulmonary hypertension gets so bad that the pulmonary pressure exceeds the systemic pressure causing reversal of blood flow from the right to the left side of the heart.

This reversal is called the Eisenmenger syndrome, and at that point the deoxygenated right-sided pulmonary blood gets shunted to the left-sided systemic circulation - leading to cyanosis.

In cyanotic defects, there’s a defect which allows deoxygenated systemic venous blood to bypass the lungs and return to the body - leading to cyanosis.

Ventricular septal defects are the most common pediatric heart defects.

A small defect leads to minimal left-to-right shunting across the ventricles, and is not associated with any increase in pulmonary vascular resistance or with any symptoms.

Larger defects can be heard on auscultation as a loud, harsh, or blowing holosystolic murmur, and are best heard over the lower left sternal border. There may also be a palpable thrill.

The pulmonic component of the second heart sound can also get louder as a result of pulmonary hypertension.

And because of the increased blood flow across the mitral valve, a mid-diastolic, low-pitched rumble at the apex might be heard too.

Larger VSDs can cause a parasternal heave and a displaced apex beat.

It is usually the first and only test needed to diagnose a ventricular septal defect.

Next, a chest x-ray might show signs of cardiomegaly and increased pulmonary vasculature, and ECG might show left ventricle hypertrophy in those with large shunts.

Both x-ray and ECG are not diagnostic of a VSD, but can be part of the initial workup when other cardiac issues are suspected.

Treatment of small VDSs is usually not required, because they often close spontaneously during the first year of life.

Even if they don’t, small, asymptomatic VSDs typically don’t cause any problems.

When there’s a large VSD, and a history of endocarditis or left ventricle dysfunction, treatment consists of surgical or percutaneous closure of the VSD.

In cases of severe pulmonary hypertension and Eisenmenger's syndrome, closure of the VSD is not recommended, and instead pulmonary vasodilators such as bosentan or sildenafil can be used.

Next, atrial septal defects can occur in any portion of the atrial septum.

On auscultation, characteristic findings include a mid-systolic pulmonary flow or ejection murmur accompanied by a widened split second heart sound in all respiratory phases because the extra blood return during inspiration gets equalized between the left and right atria.

The widening of the split is due to prolonged emptying of the enlarged right ventricle which delays pulmonic closure.

An additional short, rumbling mid-diastolic murmur might be heard along the lower sternal border due to increased blood flow across the tricuspid valve.

Over time, the individual might present signs of heart failure.

In some cases, atrial enlargement leads to chest deformity with transverse depressions along the sixth and seventh costal cartilages which are known as Harrison grooves.

Next, a chest radiograph could be performed as well, as it might show heart enlargement and increased pulmonary vascular markings.

Additionally, ECG in those with large shunts can shows a slightly prolonged QRS complex with a characteristic rSr' or rsR' pattern in V1 due to right ventricular hypertrophy, right axis deviation, or p waves taller than 2.5 millimeters, suggesting right atrial enlargement.

Regarding treatment, small atrial septal defects frequently close spontaneous closure of the defect in the first year of life.

Defects that are greater than 1 cm often require surgical or percutaneous closure.

On auscultation, a continuous murmur with like machinery in quality, is best heard in the second left intercostal space. soon after onset of the first sound.

In those with a large left-to-right shunt, a low-pitched mitral mid-diastolic murmur may be audible at the apex as a result of the increased volume of blood flow across the mitral valve.

A systolic thrill, maximal in the second left interspace may radiate toward the left clavicle, down the left sternal border.

Over time a large PDA could can lead to congestive heart failure, impaired growth, and bounding peripheral arterial pulses and a wide pulse pressure due to runoff of blood into the pulmonary artery during diastole.

Regarding imaging, echocardiography is the first step towards diagnosis as it can visualize and measure the ductus, show left atrial and left ventricular enlargement in large defects, and masses the direction and volume of the shunt.

Next, chest radiography can might prominent pulmonary artery with increased pulmonary vascular markings, and cardiac enlargement if the shunt is important.

And ECG in older infants and children may demonstrate left ventricular enlargement with a deep Q wave and tall R waves in leads II, III, Avf, V5, and V6.

Acetaminophen, for example, is administered intravenously 15 milligrams per kilogram every 6 hours for 3 to 8 days.

If the PDA is hemodynamically significant despite pharmacologic therapy and results in increased respiratory support or renal impairment, they should be ligated surgically or occluded percutaneously.

However, once severe pulmonary vascular obstructive disease develops, ligation or closure is contraindicated.

On auscultation, a short systolic murmur is often heard along the left sternal border at the 3rd and 4th intercostal spaces, which might also be transmitted to the left infrascapular area and occasionally to the neck.

A systolic ejection click may be heard if there is an associated bicuspid aortic valve.

On examination, the classic sign of coarctation is a disparity in pulsation and blood pressure in the arms and legs.

Over time, individuals might develop cyanosis, tachypnea, and signs of heart failure. Imaging-wise, the first step towards diagnosis is echocardiography, which can visualise the location of the coarctation alongside associated anomalies of the mitral and aortic valve.

Next, chest radiography can show cardiac enlargement and pulmonary congestion, mostly in those with severe coarctation.

Treatment of mild cases is done with prostaglandin E1 infusion, which can open the ductus arteriosus but also seems to relax the tissue of the coarctation segment.

Definitive treatment is elimination of the narrowed segment either through surgery or via transcatheter techniques.

Surgery requires removal of the coarctation segment and direct anastomosis of the normal aorta.

Ok so let's now discus cyanotic heart defects. First, tetralogy of Fallot has four components: pulmonary stenosis; a malalignment type of ventricular septal defect; dextroposition of the aorta so that it overrides the ventricular septum; and right ventricular hypertrophy.

On auscultation, there might be a systolic murmur that is usually loud, harsh, crescendo-decrescendo, and most intense at the left sternal border and usually preceded by a click.

The murmur is caused by turbulence through the right ventricular outflow tract and it tends to become louder and harsher as the severity of pulmonary stenosis increases.

In some cases, the P2 sounds might not be audible, and a systolic thrill may be felt along the left sternal border in the 3rd and 4th parasternal spaces.

Over time, individuals might have a left anterior hemithorax bulge due to right ventricular hypertrophy and signs of heart failure.

Often, cyanosis is not present at birth; but it occurs later in the 1st year of life.

Older children who have not undergone surgery may have dusky blue skin, gray sclerae with engorged blood vessels, and marked clubbing of the fingers and toes.

Moreover, they present dyspnea occurs on mild exertion like playing.

Characteristically, children assume a squatting position for the relief of dyspnea caused by physical effort.

The spells occur mostly frequently in the morning or after crying, and can progress unconsciousness and, occasionally, to convulsions or hemiparesis.

Imaging-wise, the main study is two-dimensional echocardiography, which confirms the diagnosis, establishes the extent of aortic override of the septum, the location and degree of the right ventricular outflow tract obstruction, the size of the pulmonary valve annulus and main and proximal branch pulmonary arteries, and the side of the aortic arch.

Next, chest radiography might show a classic boot-shaped heart and an enlarged and right-sided aorta.

And finally, pre-ductal and post-ductal or right arm and either leg pulse oximetry should be ordered if there is any suspicion of a congenital cardiac malformation.