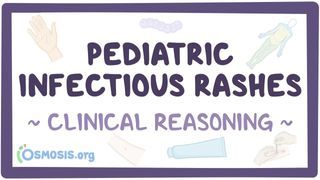 When approaching a child with a rash, the first step is to put it into one of four categories - maculopapular, vesicular, petechial or purpuric, and desquamating rashes.

A vesicular rash has vesicles, which are up to 5 mm in diameter, and look like clear blisters filled with fluid.

Finally, there are desquamating rashes, which cause peeling of the skin, like after a sunburn.

Let’s start with maculopapular rashes. First up is erythema infectiosum, or fifth disease, which is caused by parvovirus B19. The virus causes flu-like symptoms along with a fever, that lasts a few days.

Typically, just as the symptoms start to improve, a rash breaks out on both cheeks, often called "slapped‑cheeks” rash. There can also be a maculopapular, lacy rash on the body, that becomes more prominent after sun or heat exposure.

Most of the time, everything resolves in a week, but sometimes there can be complications like anemia due to reduced production of reticulocytes that lasts for a few weeks.

This can be dangerous in children with chronic hemolytic diseases, like sickle cell disease who rely on a high reticulocyte count and can have an aplastic crisis. So in these situations, packed red blood cell transfusions may be needed.

In addition, if a pregnant female gets parvovirus B19, she can transmitted the infection to her fetus. The virus can get into the fetal bone marrow, and can cause anemia, which is called "hydrops fetalis” and is usually fatal, resulting in spontaneous abortion.

A diagnosis can be made by identifying parvo B19-specific immunoglobulin M, or IgM antibodies or by PCR. There’s no specific antiviral used, and no vaccine available.

Next is the measles virus, also called rubeola.

Measles is one of the most contagious infectious diseases. Initially it causes a fever, and the 3 C’s —cough, coryza - which is essentially a stuffy nose, and conjunctivitis, followed by a rash.

The rash begins on the mucous membranes and looks like small white spots on the inside of the cheeks opposite the molars - like small grains of sand. After that, there’s a maculopapular rash that moves in a cephalocaudal direction. It starts at the head - or cephalo, and goes down to the extremities - or caudal, and fades over a few days, leaving behind the cough as a lingering symptom for a few more weeks.

In rare cases, measles can damage the lungs, intestines, and brain, and can lead to complications like pneumonia, diarrhea, even encephalitis.

Measles also suppresses the immune system for up to 6 weeks, and that allows for bacterial superinfections like otitis media and bacterial pneumonia.

Another severe complication that typically happens about a decade after the initial illness is subacute sclerosing panencephalitis.

Diagnosis of measles is done by detection of Measles-specific IgM antibodies or PCR. There’s no specific treatment, so management is aimed at treating superinfections, providing adequate fluids, and pain relief.

Severely malnourished children are at high risk for complications and death, and they’re given vitamin A, which acts as an immunomodulator that boosts the immune response to measles.

Measles can prevented with the MMR or Measles- Mumps- Rubella vaccine, which is a live attenuated immunization given between 12-15 months of age and again between 4-6 years of age.

Finally, in an outbreak, both measles vaccine and measles immunoglobulin can be given to household contacts who are unimmunized, as well as those at high risk like pregnant women and young infants to help prevent others from getting sick.

Now, rubella is also known as German measles or 3-day measles. It’s a milder disease then measles, often causing no symptoms. You can think of a mild-mannered German softly ringing a bell for 3 days. The virus causes flu-like symptoms along with tender post-auricular and suboccipital lymphadenopathy. In some children, there’s a rash with tiny red spots on the soft palate, called Forchheimer spots. Soon after, there can be a generalized maculopapular rash that typically starts behind the ears and progresses down to the trunk and extremities, sparing the palms and soles.

This rash typically resolves in a few days. But if the infection occurs in a pregnant female, it can cause congenital rubella syndrome which causes a classic triad of hearing loss, cataracts, and heart defects.

Diagnosis of rubella can be done with rubella IgM antibodies or PCR. No specific treatment is available, but the disease can be prevented with the measles mumps rubella vaccine.

Finally, there’s roseola, also called exanthema subitum, which is caused by human herpesvirus-6 (HHV-6) and HHV-7. These viruses cause flu-like symptoms along with an extremely high fever, which can trigger febrile seizures in some children.

Typically the fever resolves quickly, and after it’s over, a child will develop a maculopapular that begins on the trunk and then spreads to the face or extremities. This rash typically fades in a few days.

The diagnosis is clinical, there’s no treatment, and there’s no vaccine.

Moving on to vesicular rashes. First up, is varicella or chickenpox which is caused by the varicella- zoster virus, or VZV for short.

Varicella is very contagious and initially causes flu-like symptoms, followed by an intensely pruritic rash. The rash typically starts on the trunk and then spreads outward, eventually covering the entire body, including the scalp. The rash has vesicles on an erythematous base, sometimes called as “dewdrops on rose petals” - but that really does an injustice to how it feels. The vesicles come up in groups or crops and while some ulcerate and then heal over - then new ones pop up - so that the vesicles are in all different phases of healing. Sometimes the sores can get superinfected - leading to a cellulitis. There can also be painful sores on mucosal surfaces like within the mouth.

Usually, the whole thing resolves in about one week. Unfortunately, in immunocompromised individuals there can be severe complications like encephalitis or cerebellitis which causes ataxia.

In pregnant females, varicella in the first or second trimester can lead to congenital varicella syndrome in the developing fetus - which can cause limb atrophy, ocular, and neurological defects.

Now, once a child recovers from varicella, the virus remains dormant in the nerve ganglia.

Years later, if the immune system weakens, the virus can reactivate in a few dermatomes. Like tulip bulbs that sprout up in the same spot years later. This is called herpes zoster or shingles.

In shingles there’s typically pain, itching, or tingling in whichever dermatome reactivated. So the rash looks like a single stripe of vesicles around either the left or right side of the body or on one side of the face.

The rash resolves over a month, but there can be pain in the affected dermatome which lasts for more than 90 days called postherpetic neuralgia.