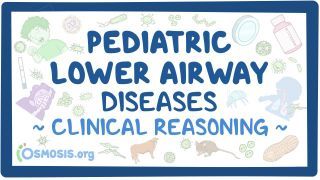 The lower airways include the trachea, bronchi, bronchioles and lungs and can be affected by a number of distinct pathologies in children.

Let’s start with foreign body aspiration, which is where young toddlers might get something like a small coin or a peanut, lodged in their respiratory tract.

Most of the time, the foreign body goes into the right mainstem bronchus because it’s wider and more vertical than the left.

In general, if the blockage affects a larger airway or causes a more complete blockage of an airway, then it causes more severe symptoms.

Typically, children have a sudden onset of shortness of breath, along with coughing, gagging, choking, or drooling.

On auscultation, breath sounds are diminished in blocked area.

If there’s partial obstruction of the extrathoracic portion of the trachea, that can cause inspiratory stridor.

If there’s expiratory wheezing, that means that there’s partial obstruction of either the intrathoracic trachea, bronchi, or bronchioles. And that wheezing will be localized to the blocked area.

If there are no sounds like this on auscultation, it may be because there’s a complete obstruction of an airway.

If a foreign body aspiration is suspected, it’s important to do a neck or chest radiograph.

Objects like coins and batteries are radiopaque, and will be visible. Whereas objects like a piece of food are radiolucent, so they don’t show up.

In a partial obstruction, there’s focal hyperlucency and reduced pulmonary markings distal to the obstruction, due to air trapping. In other words, the foreign body acts like a one way valve that allows air to enter, but not escape.

If there’s a lot of air trapping, it can cause a mediastinal shift away from the affected side.

If the radiographs look suspicious for a foreign body aspiration, a chest CT can be done to confirm the suspicion.

Triggers for asthma include allergens, like house dust mites, animal dander, and pollen; or irritants like tobacco smoke, respiratory tract infections, cold or dry air, and even emotional stress and exercise.

In response to a trigger, there can be symptoms like dry cough, chest tightness, or shortness of breath.

On auscultation there’s usually wheezing during expiration, and that wheezing is heard all over both lungs, in contrast to the localized wheezing due to foreign body aspiration.

Diagnosis of asthma requires pulmonary function tests, or PFTs, which show a decreased ratio of FEV1 to FVC, during an episode of asthma.

In a symptomatic individual, the FEV1 to FVC ratio reverses back to normal with bronchodilators.

Usually a chest x-ray is normal, but it might show diffuse hyperlucency, due to the air trapping and hyperinflation.

A CBC might show increased eosinophils and IgE levels, while skin testing might identify specific allergens which should be avoided.

Acute bronchitis mostly affects children under 2 years old, and it’s usually due to a viral infection. Most commonly influenza type A and B, parainfluenza, adenovirus, respiratory syncytial virus or RSV, rhinovirus, and coronavirus.

Some bacteria that can cause acute bronchitis include Bordetella pertussis, Mycoplasma pneumoniae, and Chlamydia pneumoniae.

There’s usually symptoms of a upper respiratory tract infection, like congestion, sore throat, and occasionally a low grade fever. But the key feature of acute bronchitis is a cough that lasts for more than 5 days.

Testing for pertussis is recommended in children whose cough has a “whooping” sound, or has lasted longer than three weeks; as well as unvaccinated children and those who have had recent exposure to someone with pertussis.

Mycoplasma pneumoniae and Chlamydia pneumoniae can sometimes cause acute bronchitis in older children or teenagers, but no testing or treatment is recommended.

If a child is in respiratory distress, a chest Xray can be done to evaluate for a pneumonia, but it’s otherwise not needed.

Treatment is focused on rest and fluids, and avoiding triggers for inflammation like second hand smoke.

Antibiotics are generally not recommended, with the exception of pertussis, where a macrolide antibiotic is given.

Acute bronchiolitis mostly affects ages between 2 and 6 months, and the leading cause is RSV, but other causative viruses include adenovirus, human bocavirus, human metapneumovirus, and very rarely bacteria, like Mycoplasma pneumoniae.

Once again, there’s usually symptoms of a upper respiratory tract infection, like congestion, sore throat, cough, and occasionally a low grade fever. But the key feature is that it typically leads to respiratory distress.

A child might also have difficulty feeding, or appear lethargic or dehydrated.

Some children can even have brief apneic episodes.

Bronchiolitis is particularly severe among infants that were born premature, are younger than 12 weeks, had a low birth weight, didn’t breastfeed, or have chronic pulmonary disease, hemodynamically significant congenital heart disease, immunodeficiency, or a neurologic disease that impairs sputum clearance.

The diagnosis can be made clinically, but often rapid antigen testing is done to look for RSV.

Treatment is focused on rest, IV fluids, and respiratory support. Supplemental oxygen is usually given via a nasal cannula, face mask, or a head box to maintain an SpO2 above 92 percent.

In severe cases and in immunocompromised children with RSV, Ribavirin, which is an anti-RSV antiviral medication, may be used.

Finally, in high risk infants, prophylaxis with monthly injections of a premade antibody against RSV called palivizumab is recommended during the winter months.

Finally, there’s pneumonia. In early-onset neonatal pneumonia, which develops in the first 3 days of life, the most common pathogens are Group B Streptococcus, Escherichia coli, and Listeria monocytogenes.

In late-onset neonatal pneumonia, which develops from the 3rd day of life to the third week of life, the most common pathogens are Streptococcus pneumoniae, Staphylococcus aureus, and Streptococcus pyogenes, as well as viruses, like adenovirus, parainfluenza, influenza, and enteroviruses.

From three weeks until six months of age, the most common pathogens are viruses, with RSV being the most common, followed by parainfluenza and adenovirus, followed by bacteria, like Streptococcus pneumoniae, Bordetella pertussis and Chlamydia trachomatis, which causes a special “afebrile pneumonia of infancy”.

From 6 months to 5 years of age, the most common cause of pneumonia, are still many of the same viruses - RSV, influenza type A and B, parainfluenza and Human metapneumovirus. And once again, some less common, bacterial causes include Streptococcus pneumoniae and Staphylococcus aureus, but also, Haemophilus influenzae, and less commonly, atypical bacteria, like Mycoplasma pneumoniae and Chlamydia pneumoniae.