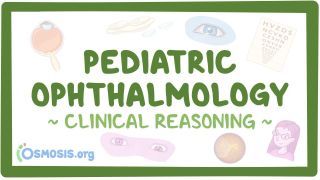 In children, some causes of vision changes don’t typically cause pain and these include amblyopia, strabismus, and congenital cataracts.

Causes of vision changes that do cause pain include retinoblastoma, conjunctivitis, corneal abrasion, and retinal detachment.

Routine vision checks are done at well-child visits, and they should be done at least once when a child is between three and five years of age. And it can be done with red reflex testing, which is where an ophthalmoscope is used to compare the reflex in both eyes for asymmetry. It’s done in a dark room, where the light is directed into both eyes at the same time from a distance of 1 to 2 feet. If screening detects an abnormal red reflex further testing is required.

Sometimes, a concern is raised when parents notice that their child doesn’t seem to track their face or follow objects, or they might notice nystagmus, which are involuntary eye movement.

Parents might also notice that the normal "red eye" glow of the pupil is missing in photos.

Older children may complain of blurred vision, but most are unaware of their visual deficit.

Diplopia or double vision; visual inattentiveness, which is when people ignore things on a portion of their visual field; gray cloudiness of the pupil which is normally black; and photophobia may also be present.

The first eye pathology that’s not painful is amblyopia, where the diminished vision is usually in one eye, and is secondary to abnormal visual stimulation of the visual cortex.

Because the retina is not stimulated with a clear, focused image, or because the visual axes may be misaligned, there’s abnormal visual stimulation of the visual cortex and suppression of the retinal image formed by 1 of the eyes.

Simply put, the brain focuses more on one of the eyes, while the other receives a weaker input, thus seeing worse, which is why the condition is also called ‘lazy eye’.

Amblyopia is classified by the underlying cause: there’s strabismic amblyopia - caused by misalignment of the eyes, refractive amblyopia which occurs as a result of an asymmetric refractive error called anisometropia; and deprivational amblyopia which results from vision deprivation like congenital cataracts or corneal opacities.

The initial evaluation might reveal risk factors like strabismus and refractive errors, prolonged occlusion of one or both eyes, ptosis, leukocoria or abnormal white reflection of the retina, and eyelid hemangioma.

Next, visual acuity in both eyes should be tested. In preverbal children, it’s done through the fixation reflex test which involves moving an object like a toy to and from in the child's visual space. Each eye is tested separately by occluding the other eye, and the eye with amblyopia doesn’t maintain fixation. The occlusion objection test involves monitoring the child's response to alternate occlusion of the eyes. A strong preference for one eye, usually shown by kids crying when the good eye is covered, is highly suggestive of amblyopia.

The vertical prism test uses a prism which is held with the base down in front of the child's good eye, which causes the image viewed by this eye to be higher than that of the other eye. Amblyopia should be suspected if the eyes move upward consistently to view the displaced image.

If reduced visual acuity is detected in one eye and no other abnormalities were found, diagnosis can be made. However, that is rarely the case, thus further testing may be needed.

Next, the red reflex test or the Brückner test, is used to detect absent or irregular red reflex, which might suggest deprivational amblyopia.

Second, stereopsis or perception of depth and binocular vision can be assessed with the Titmus test, where individuals wear polarised glasses and are asked to identify 3-dimensional images that appear to pop up towards them. In amblyopia, it is frequently reduced.

Third, assessment of ocular fixation, alignment, and motility is required to detect strabismus amblyopia. Now, those with a clear visual axis to the fovea and with a normally positioned fovea can fixate with the centre of the eye; in amblyopia, an opacity, displacement or disease involving the fovea may result in eccentric fixation, as if looking at an object from the side.

Ocular alignment is also tested with the corneal light reflex. This is done by holding a penlight 1 to 2 feet from the child’s face while they are looking at a small picture. If the reflection of the light is symmetrically centred on the cornea in each eye, no manifest strabismus is present. If it is decentred in 1 eye, manifest strabismus is likely.

The ocular motility examination, where individuals are asked to move their eyes in different directions, may help to discover certain patterns of eye movement abnormalities that might occur in strabismic amblyopia.

Ok so next, anterior segment examination using a slit lamp should be performed to detect pathologies like cataracts that may contribute to deprivational amblyopia.

And finally, other causes of amblyopia can only be assessed with a reliable cycloplegic retinoscopy. It uses a retinoscope and eye drops, typically cyclopentolate 0.2% phenylephrine 1% for infants and cyclopentolate 1% for toddlers and children to dilate the pupil and relax the ciliary muscle. It might show an abnormal refractive state and a dull or partially opacified retinoscopic reflex, which suggests refractive amblyopia.

Additionally, dilated fundoscopy with an indirect ophthalmoscope might also be used since it can rule out ocular pathologies that may contribute to decreased vision like macular lesions or retinal detachment.

1st line treatment in non-deprivational amblyopia like strabismic and anisometropic amblyopia, consists of optical correction of any refractive error with glasses if present. If it persists after four months, patching is started to encourage the use of the amblyopic eye by discouraging the use of the better-seeing eye with a patch, usually two hours per day. Cycloplegic agents, usually atropine 1% ophthalmic solution or cyclopentolate 1% ophthalmic solution, one drop to the sound eye once a day, can be used to blur vision in the sound eye instead of a patch. After the amblyopia has been treated, children with residual strabismus typically undergo strabismus surgery.

1st line treatment in deprivational amblyopia consists of early surgery if the deprivation is due to corneal opacity, cataract, non-clearing vitreous haemorrhage, or severe ptosis. For those with unilateral deprivation amblyopia, patching the sound eye is a necessary additional treatment.

The second painless eye pathology is Strabismus. In strabismus, the eyes are misaligned in such a way that they are not simultaneously viewing the same object.

The tendency for the eyes to deviate from each other is called "latent" when the eyes are kept in alignment by the fusion mechanism, and "manifest" when alignment is not maintained by fusion.

Initial evaluation elements that raise suspicion of strabismus include visual confusion which is seeing different objects in the same location; amblyopia; and abnormal eye movements and intermittent closure of one eye, especially in sunlight.

Although not specific for strabismus, some complain of asthenopia or ocular discomfort with 'eye strain' or headaches in certain situations. They may also note a 'pulling sensation' and be aware of when the eyes are misaligned.

The angle latent strabismus can be measured with the alternate prism cover test.

Next, following Hirschberg test, the Krimsky test can be carried out to measure the angle of misalignment. If the reflection of a fixation light is decentred on the cornea of one eye, a prism is held over the fixating eye. This will induce a movement of both eyes in the direction of the apex of the prism. Additionally, the need for further evaluation depends upon the suspected etiology of strabismus. Blood tests, including a CBC, ESR, or CRP, along with neuroimaging studies may be indicated, but are rarely required for routine strabismus.

The first line of treatment in primary strabismus is correction of refractive errors.

The visual acuity of all patients with strabismus should be assessed, and if a significant refractive error is present, it should be corrected using glasses or contact lenses.

If amblyopia is present, it also needs to be assessed.

Second, the definitive treatment for most is extraocular muscle surgery, particularly when the strabismus has been stable over several months.

Secondary strabismus requires treatment of the underlying cause and correction of refractive error. Then, extraocular muscle surgery can be performed. However, it is important to wait 6 to 12 months for potential spontaneous recovery and for stabilisation before embarking on surgery.

Now congenital cataracts is a common cause of unilateral or bilateral vision loss in children. It refers to a lens opacity present at birth, which is normally clear. Common causes include congenital infections like Toxoplasmosis or rubella, genetic syndromes such as Marfan, Down or Lowe’s syndrome, or medications like corticosteroids, or radiation. Initial evaluation might detect a broad spectrum of severity. Whereas some lens opacities do not progress and are visually insignificant, others can produce profound visual impairment. If a lenticular opacity is in the visual axis, it is considered significant and may lead to blindness. If the cataract is small, in the anterior portion or the periphery of the lens, no visual loss may be present. Additionally, individuals often present with systemic illness and syndromic features like sparse eyebrows, and an epicanthal fold which are characteristic of Down's syndrome; frontal bossing for Lowe syndrome; and short stature, dry scaly skin, and skeletal changes in Conradi–Hünermann syndrome.

Ocular examination begins with visual acuity assessment which might detect amblyopia, and the red reflex test, which can detect if retinal opacities are present in one or both eyes.

Next, for unilateral cataracts with no evidence of systemic involvement, slit lamp examination of both eyes might be the only test needed to confirm the presence and size of a cataract, to identify the time when the insult occurred in utero, and if there is systemic involvement.

Additionally, intraocular pressure measurements and an ultrasound of the posterior pole if not visible might be required as well, both of which should be normal.

Next, in bilateral or unilateral cataracts with suspected systemic involvement, dilated fundoscopy is recommended to rule out any vitreous or retinal pathology. If it reveals the classic appearance of congenital cataracts like persistent fetal vasculature or posterior lenticonus, no further evaluation is necessary. If inconclusive or if suspected, family history and examination of family members might reveal clear autosomal dominant pattern. If the individual has no other health issues, further evaluation is not necessary.