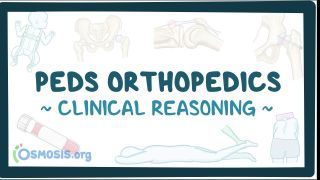 Pediatric bone pathologies typically cause pain, and it can vary in terms of intensity and radiation.

Pain usually involves the hip, knee, and back, and it usually worsens over time. If it involves one leg, the pain can lead to limping, and in some cases, individuals might not be able to bear weight.

The symptoms might be unilateral or bilateral, and they might worsen after physical effort and improve with rest. Arm pain is usually related to fractures or arm injuries secondary to trauma and an x-ray or CT of the arm is enough for diagnosis.

The conditions can be divided into those lead to hip pain which include developmental dysplasia of the hip, Legg-Calve-Perthes, slipped capital femoral epiphysis, and transient synovitis; those that cause knee pain, mostly represented by Osgood-Schlatter disease; and conditions that lead to back pain, usually congenital scoliosis.

First, developmental dysplasia of the hip or DDH is mostly associated with newborns, and it’s a spectrum of conditions that includes abnormal development of the acetabulum and proximal femur, and mechanical instability of the hip joint.

DDH results from laxity of the ligaments around the joint or from in utero positioning.

First, history might reveal associated risk factors like a positive family history of DDH, female gender, breech presentation at more than at 34 weeks of gestation, and tight lower extremity swaddling.

Physical examination might detect limited range of motion of the hips and legs, asymmetry of the limbs if only one side is affected, or asymmetric skin creases in the thigh and groin.

In those up to 6 months of age, DDH can be detected by the Barlow and Ortolani tests, which are also widely used as screening tests. The tests begin with the individual laying on their back on a stable surface with the hip flexed to 90° and in neutral rotation, which is when the limb is turned neither toward nor away from the body's midline.

During the Barlow test, the hip is then slightly adducted, which is when the thigh is brought towards the midline, while the examiner's hand is placed on the knee, directing the pressure posteriorly. The test is positive when a clunk indicates that the head of the femur is moving out of the acetabulum.

During the Ortolani test, the knee is moved away from the midline into a frog-leg position, with the examiner's fingers placing anterior pressure over the trochanter. Instability is indicated by the palpable, sometimes audible, clunk of the femoral head moving over the posterior rim of the acetabulum and relocating in the cavity.

After the age of 6 months, DDH can be detected through the hip abduction test where the hips are flexed to 90° and the thighs are gradually abducted to 70° from the midline. In DDH abduction is under 45° because muscle shortening in the affected hips.

Next, those with a positive Ortolani or Barlow sign should have an imaging study to confirm diagnosis.

If history and physical examination raise suspicion of DDH but neither an Ortolani nor a Barlow sign is present, the best approach is observation and a follow-up hip examination in 2 weeks.

Those with normal examination and no risk factors should continue to be examined for signs of DDH at the next well-child visit.

Imaging-wise, before 6 months of age, ultrasound, with both static and dynamic evaluation, is preferred to assess the hip morphology, position, and stability. It usually reveals subluxation; abnormal relationship between femoral head and acetabulum; and can also measure the percentage of the femoral epiphysis that is covered by the acetabular roof. Ultrasound should be delayed until about 6 weeks of age to reduce false positive results.

The management of those younger than four weeks of age depends upon the clinical findings and risk factors. Laxity in this age group usually improves spontaneously, meaning observation is the best approach, with an ultrasound reassessment after four weeks of age.

For those four weeks to six months old, treatment with an abduction splint like the Pavlik harness is recommended if there’s hip dislocation or persistently dislocatable or subluxatable hips.

Those older than six months are best managed by open or closed reduction surgery with a spica cast.

And in individuals over 6 years of age, there is little potential for remodelling and, therefore, salvage osteotomies are recommended.

Legg-Calve-Perthes, which is sometimes just referred to as Perthes, usually occurs in those around 6 years old, and it’s due to idiopathic avascular necrosis of the proximal femoral epiphysis. It’s thought to be caused by occlusive vascular events of unknown origin, followed by re-vascularisation.

History might revel risk factors such as maternal smoking during pregnancy, family history of skeletal dysplasias or thrombotic diseases; and male sex.

Additionally, those Perthes’ are typically shorter, hyperactive, might present quadriceps and gluteal muscle atrophy, and more importantly, might develop an insidious antalgic gait.

Physical examination begins with the Trendelenburg's test is where the individual is asked to stand on one leg for 30 seconds without leaning. A negative test is when the pelvis stays level, or rises, and positive when the pelvis drops toward the unsupported side.

Next, radiographs confirm diagnosis when the Trendelenburg's test is positive or, if negative, when risk factors and other physical signs raise clinical suspicion of Perthes’. If risk factors are absent, no imaging is required and observation will suffice.

Radiographs can also stage the disease and establish prognosis. Changes that might appear include joint space widening; a subchondral fracture; sclerosis; fragmentation; and subchondral collapse of the ossification center of the femoral head. Early on, the radiographs may be normal. In this case, if there still a strong suspicion, an MRI is done to confirm the diagnosis and extent of the lesion and it might show osteonecrosis, signs of revascularization, and subchondral fractures.

Laboratory studies are only indicated in the presence of pain and to help exclude other diagnoses. The CBC is typically normal, and the ESR and the CRP may be slightly increased.

Treatment for those under 5 years consist of monitoring and mobilisation through physical therapy consisting of exercises to help restore hip joint range of motion, especially rotation and abduction. Additionally, any acute pain should be managed with NSAIDs or acetaminophen and bed rest.

And in those with advanced disease, salvage procedures may be considered to improve congruence of the hips.

Slipped capital femoral epiphysis occurs mostly in young teenagers - around 13 to 15 years old, and it represents the posterior and inferior slippage of the proximal femoral epiphysis on the metaphysis. It’s thought to be related to obesity, growth surges, and endocrine disorders.

The condition is classified as stable or unstable based on the individual’s ability to bear weight without support.

History might reveal obesity; pain that is poorly localized to the hip, groin, thigh, or knee; the inability to bear weight; and risk factors like family history of slipped capital femoral epiphysis, male sex, and endocrine disorders like hypothyroidism or growth hormone deficiency.

Physical examination might detect decreased internal rotation, abduction, and flexion of the hip.

Characteristically, when the hip is passively flexed from an extended position, the thigh of the affected limb abducts and externally rotates, a thing called obligatory external rotation. Next, the Trendelenburg test is positive, causing a pelvic tilt because unaffected side is lower. If obligatory external rotation is present and the Trendelenburg is positive, radiography can confirm diagnosis. If physical examination findings are inconclusive but clinical suspicion is strong, an MRI should be performed to diagnose a pre-slip condition.