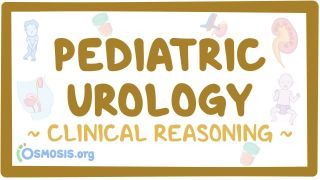 Some of the most common urologic issues in children include congenital defects of the urethra - so hypospadias and epispadias; hematuria; pathologies associated with hydronephrosis - so congenital ureteropelvic junction obstruction, ectopic ureter, vesicoureteral reflux, and posterior urethral valves; and lastly, urinary tract infections.

Let’s begin with congenital defects of the urethra. First, hypospadias is a congenital disorder that’s common in males but extremely rare in females.

On examination, there are three possible types of hypospadias in males: glanular, which is near the head of the penis, midshaft, which is the middle of the penis, and penoscrotal—where the penis and scrotum come together. Additional findings include foreskin that fails to become circumferential and appears as a dorsal hood; chordee, which is when the penis has a hook shape and curves inwardly; inguinal hernia, which is a protrusion of bowel through the inguinal canal, and cryptorchidism, which is the absence of testes from the scrotum. The clinical picture might also present with painful urination, recurrent urinary tract infections, sexual dysfunction, infertility, and psychosocial problems, especially as the individual grows and matures sexually.

Next, an excretory urogram, which uses a series of x-rays to visualize substances passing through the kidneys, bladder, and the urethra is recommended if the clinical picture is severe or if the individual presents symptoms suggestive of urinary tract infection or of an associated defect.

Common findings on urogram include rotation anomalies of the kidneys, meatal stenosis, and vesicoureteral reflux.

Alternatively, ultrasonography of the urinary tract and internal genital organs can also be used to detect other urinary tract malformations.

Additionally, endoscopic examination of the urethra at the time of surgery can exclude the presence of urethral anomalies not detected by excretory urogram or ultrasound.

Regarding treatment, in mild forms of hypospadias, observation might suffice.

More severe forms, however, require surgery to restore normal urinary function and sexual function. It typically involves the construction of a new urethra using penile shaft skin or foreskin by urethroplasty, and repair of any associated defect. Surgical intervention can be performed in most individuals on an outpatient basis after the age of 3 months.

Sometimes hormone therapy can be useful as well, especially when there is an additional problem. For example, in a boy with a micropenis, which is an extremely small penis that results from low androgen levels during development.

Finally, infants with hypospadias should not undergo circumcision because the foreskin may be useful for future reconstruction.

Second, epispadias is similar to hypospadias, but the meatus is not on the bottom of the urethra but on top of it, on the dorsal side of the penis. This is due to an issue that occurs during the 6th week of gestation, which leads to the genital tubercle growing in a posterior direction, towards the rectal area instead of the cranial direction. Diagnosis is clinical.

On examination, based on its location, there are three types of epispadias: penopubic, where the base of the penis and the abdominal wall come together, penile, which is just somewhere along the penis, and again glanular—near the head of the penis.

Others could also present bladder exstrophy, which is caused by incomplete closure of the abdomen, allowing the bladder to be seen, rather than be covered with the skin and muscles of the abdomen; micropenis; and displaced anus. Additional symptoms might include incontinence, vesicoureteral reflux, and urinary tract infection.

Next, if the individual is symptomatic or an associated defect is suspected, further investigation is recommended. That may mean labs to check the function of the kidneys, and urine tests; imaging studies including ultrasound, CT scans, or X-rays; and other urological tests to visualize the inside of the urinary tract.

Treatment of epispadias is surgical, consisting of urethroplasty. Moreover, circumcision should be avoided until surgical repair has been completed.

Some common etiologies for gross hematuria in children include urinary tract infection, irritation of the meatus or perineum, and trauma.

The most common causes of persistent microscopic hematuria include glomerulopathies, hypercalciuria, and nutcracker syndrome, which results from the compression of the left renal vein between the aorta and proximal superior mesenteric artery.

Transient hematuria is usually due to urinary tract infection, trauma, fever, and exercise.

To begin, the initial examination might point towards one cause or another. For example, a history of new onset of incontinence, dysuria, frequency, or urgency suggests urinary tract infection as a possible cause.

Alternatively, a history of unilateral flank pain that may radiate to the groin suggests obstruction caused by a calculus or blood clot.

In comparison, flank pain without radiation but with fever, dysuria, and frequency or urgency are suggestive of acute pyelonephritis.

The next step is urinalysis, where a urine sample is evaluated in three ways: visual exam, dipstick test, and microscopic exam.

Now, on the visual exam, gross hematuria is suspected when urine is brown or red, whereas microscopic hematuria cannot be detected this way. It is usually discovered as an incidental finding on a urinalysis prompted by urinary or other symptoms. Urine is typically clear but cloudiness and unusual odor may indicate an infection.

Second, a urinary dipstick for blood is necessary to determine whether or not the urine discoloration is due to blood or another substance. This is a vital step because substances like pigments from medication or food such as phenazopyridine, rifampicin, and beets or free hemoglobin or myoglobin resulting from rhabdomyolysis, a fancy name for skeletal muscle damage, can also lead to the same urine coloration.

If the urinary dipstick test is positive, the red pigmentation is due to blood. A negative test eliminates blood the cause of urinary discoloration.

Third, the microscopic exam part of the urinalysis confirms microscopic hematuria if there are 3 or more red blood cells per High Power Field on urine sediments. It can also suggest if the bleeding site is glomerular or extraglomerular.

Glomerular bleeding is highly suggested by red cell casts, dysmorphic or damaged red cells; and protein excretion greater than 100 milligrams per square meter in the morning urine sample. Now, although helpful if present, the absence of these findings does not exclude glomerular disease.

Nonglomerular bleeding is suggested by urinary red blood cells with uniform normal size and shape and the absence or red cell casts.

Other findings on urinalysis alongside blood can also suggest a diagnosis. For example, urinary tract infection is suggested by a positive dipstick test for leukocyte esterase or nitrite, more than five white blood cells per high-power field, and the presence of bacteria on a Gram stain of unspun urine.

Next, further evaluation in hematuria is guided by the individual’s clinical symptoms, history, physical examination, and urinalysis.

Those with a history of trauma need a CT scan of the abdomen and pelvis to determine the source of blood.

If the individual presents signs or symptoms of urinary tract infection, urine culture is obtained.

Adenovirus should be considered as a potential etiology if urinary symptoms and urinalysis are suggestive of infection, but the culture is negative.

In those with a clinical picture suggestive of nephrolithiasis, renal ultrasonography is the preferred imaging modality in children.

Abdominal plain films may be useful in identifying radiopaque stones but will miss radiolucent uric acid stones, small stones, or stones overlying bony structures, and will not detect obstruction.

If the individual is completely asymptomatic, further investigation usually includes complete blood count; serum creatinine to identify renal impairment, which may occur with acute glomerulonephritis, serum C3, where a low level is consistent with a diagnosis of poststreptococcal glomerulonephritis, ultrasonography or intravenous pyelography, and renal biopsy in some cases.

Treatment depends on the underlying etiology. For asymptomatic intermittent hematuria with no additional findings, normal renal functions and no proteinuria, observation may be a reasonable approach.

Sometimes, interventional radiology guided embolism is required if the bleeding originates from the renal vasculature.

Acute urinary tract infections are treated with a one or two week course of oral or intravenous antibiotics.

Most stones under 0.5 centimeters pass spontaneously but larger ones may require lithotripsy or nephrostomy.

Let’s now talk about the causes of hydronephrosis. First, congenital ureteropelvic junction obstruction is when part of the kidney is blocked due to abnormal development.

Most often it is blocked at the renal pelvis, which is the place where the kidney attaches to one of the ureters. This partial or sometimes total or blockage slows or even stops the flow of urine out of the kidney, leading to hydronephrosis which can severely damage the kidney.

On examination, newborns may present with a palpable abdominal mass caused by the enlarged obstructed kidney. Other presentations include urinary tract infection, hematuria, or failure to thrive. Older children usually develop intermittent flank pain or abdominal pain - referred to as Dietl's crisis, alongside nausea and vomiting and low urine output.

Next, ultrasonography is needed to establish if the individual has developed hydronephrosis or not. It should be performed during the Dietl's crisis to demonstrate hydronephrosis. When the pain subsides, the sonogram is frequently normal or only demonstrates mild dilation. Ultrasonography typically shows a dilated renal pelvis with a collapsed proximal ureter.

If it confirms hydronephrosis or if it is negative but the clinical suspicion still stands, further imaging evaluation is required to differentiate congenital ureteropelvic junction obstruction from other frequent causes of hydronephrosis.

CT is an alternative to ultrasonography in the symptomatic child; however, it is not the preferred modality due to its radiation exposure. Typically, CT shows hydronephrosis without a dilated ureter. CT scan may also be initially performed in those who present with acute abdominal pain of unknown etiology.

So the next step is confirming the diagnosis by diuretic renography, which as the name suggests, consists of a renal scan and the administration of a diuretic.

The diuretic renography measures the drainage time from the renal pelvis - or the washout, and assesses each kidney's renal function. The washout value correlates with the degree of obstruction. In general, a washout measurement greater than 20 minutes indicates an obstruction.