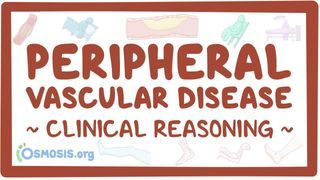 Peripheral vascular disease is an abnormal narrowing of arteries other than the ones that supply the heart or brain, and it most often affects the ones in the legs.

The most common underlying mechanism of peripheral artery disease is atherosclerosis, which results in the accumulation of lipid and fibrous material between the layers of the arterial wall.

Eventually, the affected artery becomes progressively narrower, and this may lead to pain, ulceration, and even gangrene.

Now, most people with peripheral vascular disease actually don’t have symptoms until occlusion becomes significant, which is when 70% of the vessel lumen is obstructed.

Symptoms include intermittent claudication, which includes pain, numbness, or tiredness in the legs during walking or standing, and is relieved by rest.

This is because the blood supply may be enough to meet the muscle needs at rest, but not the increased needs during activity, leading to ischemia – so basically, occurs when oxygen demand is greater than oxygen supply.

The perceived level of symptoms from intermittent claudication can be mild to extremely severe depending on the degree of blood supply.

Intermittent claudication can present unilaterally or bilaterally, as buttock and hip, thigh, calf, or foot pain, singly or in combination.

In addition, pulses in one or both groins are diminished, and bilateral aortoiliac disease that is severe enough almost always causes erectile dysfunction.

The triad of intermittent claudication, absent or diminished femoral pulses, and erectile dysfunction is known as Leriche syndrome.

And finally, tibial or peroneal artery involvement causes pain in the foot.

Auscultation of the affected artery can reveal bruits, which are a whooshing sound due arterial narrowing.

A severe decrease in limb perfusion can result in continuous pain even at rest, which is brought on, or made worse by, elevation of the involved leg, and is often worse when lying down.

Ischemic rest pain is relieved by hanging their feet over the edge of the bed, or, unlike claudication, by sitting or standing, because gravity favors blood flow to the legs.

Ischemia may also alter the appearance of the skin, presenting as focal areas of discoloration, or skin color and temperature changes.

Elevation pallor is when the foot turns pale when it’s raised, and this happens because circulation has to work against gravity as well as the narrowed arteries.

Dependent rubor is when the foot turns red when it’s lowered, because gravity works to increase perfusion.

In addition, lower peripheral pulses like the tibial and pedal pulses may be reduced or absent.

The most severe stage of peripheral vascular disease is referred to as critical limb ischemia or limb threat, which is often the result of a progressive chronic disease that affects more than one level of the arterial tree, with poor or no collateral flow to tissues.

If the blood supply falls below what is necessary to meet minimal metabolic requirements, focal areas of ischemia can progress to ulcers.

Ischemic ulcers often begin as minor traumatic wounds and then fail to heal because the blood supply doesn’t meet the increased demands of the healing tissue.

Ischemic ulcers are typically located on the toe joints, malleoli, shin, base of heel, or pressure points.

The lesions often appear dry and punched out and are painful, but with little bleeding.

Ischemic ulcers are usually associated with the other clinical features of chronic ischemia, including hair loss, nail changes like becoming brittle or ridged, and can become infected.

Nonhealing ulcers may progress to gangrene, which presents a hard, dry texture, usually occurring in the distal aspects of toes and fingers, often with a clear demarcation between viable and black, necrotic tissue.

Now, if blood pressure values in the ankle are lower than those in the arm, a blockage in the arteries that provide blood from the heart to the ankle is suspected.

Individuals with suspected peripheral vascular disease with normal or borderline ABIs can undergo exercise testing of ABI. This is when baseline ABI is measured prior to exercise, and then the individual exercises - usually on a treadmill at a constant speed - until claudication pain occurs for a maximum of 5 minutes. Then, the ankle pressure is measured again.

A decrease in ABI of 15 to 20% is considered diagnostic for peripheral vascular disease.

Now, an ABI greater 1.40 could indicate vessel wall stiffness caused by calcification, so it is usually considered a false negative that needs further investigation with a toe-brachial index or TBI.

In general, a TBI below 0.5 is considered diagnostic of peripheral vascular disease.

Now, ABI values lower than 0.90 are considered to be peripheral vascular disease.