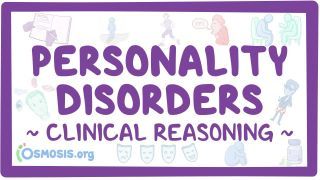 If you were to describe a friend’s personality, you might say they are creative, or easy-going but nervous in groups. Basically, you’re summarizing the personal traits that make them who they are—either how they think or how they act.

Sometimes these thought patterns or behaviors which make up a person’s personality can actually be harmful in the sense that they interfere with their day-to-day functioning in their personal life, at work, or in social settings. If this were the case, we would say that the individual has a personality disorder.

The first general criteria for personality disorder is the presence of a constant pattern of inner experience and behavior that deviates substantially from the cultural norm, manifested in two or more of the following four areas: cognition - like, for example, deviations in the ways individuals perceive themselves, other people or events; affectivity such as changes in the range, intensity, and appropriateness of emotional responses; interpersonal functioning; and impulse control.

Second, this pattern is inflexible and present in most personal and social situations, including relationships, work and school.

And lastly, the pattern is stable, of long duration, and its onset is in adolescence or early adulthood.

The patterns should not be attributable to a substance like alcohol or another medical condition.

The DSM-5 lists ten personality disorders that are split into clusters A, B, and C.

In paranoid personality disorder, there’s distrust and suspiciousness of others, which make individuals think that everything people do in relation to them is malevolent. This is shown by at least four of the following seven patterns.

First, individuals suspect that others are exploiting, harming, or deceiving them without having any reason or proof to think so.

Second, they are preoccupied with unjustified doubts about the loyalty or trustworthiness of those around them.

Third, they are reluctant to confide in others since they fear that the information will be used against them.

Sixth, individuals often think people are attacking their character or reputation, when it’s not apparent to others, and are quick to get angry and counterattack.

And seventh, they have recurrent suspicions, without justification, regarding fidelity of spouse or sexual partners.

Finally, the behaviors should not occur exclusively during the course of schizophrenia, a bipolar disorder, or depressive disorder with psychotic features, or another psychotic disorder.

That’s where a person is detached from social relationships and has a limited range of emotions in interpersonal situations. This is shown by least four of the following seven features.

First, individuals neither want nor enjoy close relationships, including being part of a family.

Third, they have little, if any, interest in sexual experiences.

Fifth, they lack close friends or confidants other than first-degree relatives.

Sixth, they appear indifferent to the praise or criticism of others.

Finally, the behaviors should not occur exclusively during the course of schizophrenia, a bipolar disorder or depressive disorder with psychotic features, another psychotic disorder, or autism spectrum disorder.

That’s where a person has social and interpersonal difficulties, and by a limited capacity for close relationships.

In addition there are distortions in perception and thinking and generally eccentric behavior. This is shown by having at least five of the following nine behaviors.

First, individuals have ideas of reference, which are the false belief that real and irrelevant occurrences or details directly relate to oneself. Like thinking that it’s raining because the world is sending them a specific signal.

Now, these aren’t delusions, which are events that are not based in reality.

Second, they have odd beliefs or magical thinking that influences their behavior like believing in clairvoyance or telepathy, and belief is usually inconsistent with cultural norms.

Third, they experience unusual perceptual experiences, including bodily illusions like feeling there’s something crawling underneath their skin.

Fourth, individuals have odd patterns of thinking and talking. For example, they might talk vaguely or they might over elaborate when it’s socially inappropriate.

Fifth is suspiciousness or paranoid thinking.

Sixth is having an inappropriate or constricted affect like laughing at a funeral.

Seventh, they might dress weirdly and inappropriately or they might do stuff that is considered odd or peculiar.

Eight, they have no close friends or confidants other than first-degree relatives.

And ninth, individuals experience excessive social anxiety that does not diminish with familiarity.

Finally, the behaviors should not occur exclusively during the course of schizophrenia, a bipolar disorder or depressive disorder with psychotic features, another psychotic disorder, or autism spectrum disorder.

That being said, there are important differences between the personality disorders and schizophrenia itself.

For example, with paranoid schizophrenia, individuals have psychotic delusions and intense paranoia, versus paranoid personality disorder where there aren’t delusions and only mild paranoia.

Personality disorders also don’t cause the ‘positive’ symptoms of schizophrenia, like hallucinations or racing thoughts.

However, there is some overlap between schizoid personality disorder and some of the ‘negative’ symptoms of schizophrenia, like having a flat affect and blunted emotions.

In antisocial personality disorder, there’s a disregard and violation of the rights of others indicated by three or more of the following seven patterns.

First, individuals fail to conform to social norms and laws, meaning they repeatedly do things that are grounds for arrest.

Second, they are deceitful, lie repeatedly, use aliases, and con others for profit or pleasure.

Third, they’re impulsive or fail to plan ahead.

Fourth, they’re irritable and aggressive, and repeatedly get into fights or assaults.

Fifth, they have no regard for their own safety or the safety of others.

And seventh, they have a lack of remorse, as shown by the indifference when hurting, mistreating, or stealing from others.

Finally, the individual must be at least 18, and need a diagnosis of conduct disorder with onset before age 15 before they can have one of antisocial personality disorder.

And third, the behaviors should not occur exclusively during the course of schizophrenia or bipolar disorder.

Second, there’s borderline personality disorder which is where there’s a pattern of instability when it comes to relationships, self-image, and affects, and also a pattern of impulsivity. This is shown by five or more of the next nine patterns.

Second, they have relationships that are intense and unstable, and which alternate between extremes of idealization and devaluation.

For example, one might think his or her partener is the love of their lives, and the next day think the same person is totally worthless.

Third, their self-image or sense of self is unstable.

Fourth, individuals are impulsive in at least two areas that are potentially self-damaging like in finances when they spend money they don’t have or if they abuse certain substances.

Fifth, they have suicidal behavior, gestures, threats, or self-mutilating behavior.

Sixth, they have mood reactivity - meaning that they get angry quickly or get very anxious for hours to days.

Seventh is chronic feelings of emptiness.

And ninth, they have temporary, stress-related paranoid thinking or severe dissociative symptoms like amnesia or detachment from self.

Third is histrionic personality disorder, which is where there’s excessive emotionality and attention seeking with at least five of the following eight patterns.

First, individuals are uncomfortable in situations where they’re not the center of attention.

Second, their interaction with others is characterized by inappropriate sexually seductive or provocative behavior.

Third, their emotions are rapidly shifting and shallow.

Fourth, individuals consistently use physical appearance to draw attention to themselves.

Fifth, they have a style of speech that mimics the style of another person like a celebrity or even a relative.