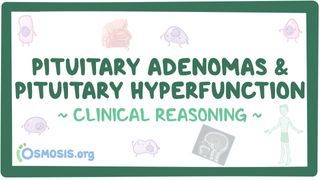 Pituitary adenomas are benign tumors of the anterior pituitary that derive from one of the five types of pituitary hormone producing cells.

One group of cells are the somatotrophs which secrete growth hormone, or GH.

Then, there are the corticotrophs, and they secrete adrenocorticotropic hormone, or ACTH for short.

Another cell group are the lactotrophs which secrete prolactin, which stimulates breast milk production, and inhibits ovulation and spermatogenesis.

There are also thyrotrophs which secrete thyroid stimulating hormone, or TSH.

Last but not least, there are gonadotroph cells, which secrete luteinizing hormone, or LH, and follicle-stimulating hormone, or FSH, both of which stimulate the ovaries or testes.

Sometimes, pituitary adenomas can be entirely asymptomatic, and they’re discovered incidentally on a head MRI performed for another reason, like a head trauma.

On an unenhanced MRI, meaning, without contrast, normal pituitary tissue has a greater signal intensity than brain tissue - so it looks whiter.

With excess prolactin, females have symptoms of hypogonadism, like infertility, oligomenorrhea or amenorrhea, as well as galactorrhea - which is a milky nipple discharge outside of pregnancy or breastfeeding.

Serum prolactin levels higher than 200 nanograms per milliliter confirm the diagnosis, and treatment relies on dopamine agonists like cabergoline, that inhibit prolactin secretion just like dopamine would.

In children, it causes gigantism, which is an increase in body size and height with disproportionately long limbs.

In adults, it causes acromegaly, which is where there’s enlargement of the bones of the skull, hands and feet.

In both gigantism and acromegaly, excess growth hormone causes enlargement of visceral organs, like the heart.

Screening for a growth-hormone secreting adenoma is done by measuring… no, not growth hormone levels, but insulin-like growth factor 1, or IGF-1 levels.

If there are high IGF-1 levels, serum growth hormone is measured to confirm the diagnosis.

Microadenomas can usually be entirely resected, and surgical success is confirmed by a serum growth hormone of less than 1 nanogram per milliliter obtained the morning after surgery.