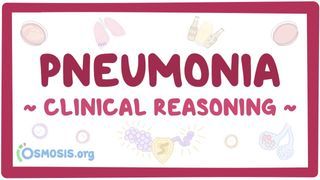 Pneumonia is due to inflammation of the lung alveoli from an infection.

Pneumonia typically causes a fever, cough, and shortness of breath, along with tachypnea and tachycardia, and occasionally hypoxemia.

If the infection is near the pleural surface, it can cause pleuritic chest pain, which is pain that worsens with inspiration.

On chest exam, there’s dullness on percussion, increased tactile fremitus - which is an increased sensation of vibration when palpating over the affected area and asking the individual to speak- and egophony - which is increased resonance of transmitted sounds and makes the letter “E” sound like the letter “A”.

On auscultation, bronchial breath sounds or inspiratory crackles may be heard.

The diagnosis of pneumonia is based on having clinical signs and symptoms along with abnormal chest imaging, most commonly a chest x-ray.

In pneumonia, a chest x-ray typically shows either a lobar consolidation or a diffuse, interstitial infiltrate.

Pneumonia has to be distinguished from atelectasis which is when there’s collapse of a region of the lung, a complication that often occurs in individuals after surgery.

On a chest x-ray, atelectasis shows up as a wedge-shaped region with its apex at the hilum with an ipsilateral shift of structures due to volume loss.

In contrast, in a pneumonia there’s usually normal or increased volume with a consolidation that doesn’t have an apex at the hilum and no shift in structures.

Now, in addition to imaging, some lab tests suggestive of pneumonia include an elevated white blood cell count, and elevated markers of inflammation like procalcitonin and C-reactive protein. It’s thought that these generally increase much more in bacterial pneumonia versus viral pneumonia.

For individuals with pneumonia, the next step is to figure out the setting in which the pneumonia developed.

If the pneumonia was acquired anywhere in the community, but not in a hospital, it’s called community acquired pneumonia, or CAP.

CAP can develop in anyone, but most commonly affects the elderly and individuals with underlying diseases like chronic obstructive pulmonary disease, or COPD, alcoholism, or smoking.

If the pneumonia was acquired more than 48 hours after admission to a hospital, it’s called hospital acquired pneumonia, or HAP.

Finally, a subgroup of HAP called ventilator-associated pneumonia, or VAP, refers to pneumonia that was acquired more than 48 hours after endotracheal intubation.

In the majority of cases, antibiotics are selected based on the most likely pathogens in a given situation, and this is called empiric coverage.

The initial step in managing CAP is determining whether an individual should be cared for in an outpatient, inpatient, or intensive care unit - or ICU setting.

One set of criteria is called CURB-65. The “C” is for confusion, “U” is for uremia, defined as a blood urea nitrogen, or BUN, greater than 20 milligrams per deciliter, “R” is for a respiratory rate greater than 20 breaths per minute, “B” is for a systolic blood pressure below 90 millimeters of mercury, or a diastolic blood pressure below 60 millimeters of mercury, and “65” is for an age of 65 or older.

Each positive criterion is given one point, and individuals with a score of 0 or 1 are generally treated in an outpatient setting.

CURB-65 is popular because it’s fairly straightforward and easy to apply, but there are other more elaborate scoring systems like the Pneumonia Severity Index, which takes more into account like vital signs and an individual’s comorbidities.

So, let’s say that an individual will be treated as an outpatient. If that individual has no comorbidities and also hasn’t been on antibiotics in the past 3 months, then they can get an oral macrolide like azithromycin, or oral doxycycline.

However, if the individual has comorbidities like chronic heart, lung, kidney, or liver disease, asplenia; which is functional or anatomical absence of the spleen, immunosuppression, or if they’ve used antibiotics in the past 3 months, then they’re more likely to have an antibiotic resistant pathogen. So in these situations, the individual should not get started on an antibiotic that they’ve recently taken. These individuals are treated with either a combination of an oral beta-lactam like amoxicillin-clavulanic acid plus a macrolide, or monotherapy with an oral fluoroquinolone like levofloxacin or moxifloxacin.

However, since ciprofloxacin doesn’t reach high enough levels in the lungs to be effective, it’s not an option here.

If an individual needs to be treated as an inpatient, then one treatment option is with an intravenous beta-lactam like ceftriaxone, cefotaxime, or ampicillin along with a macrolide or doxycycline.

An alternative treatment approach is monotherapy with an intravenous fluoroquinolone like levofloxacin or moxifloxacin.

Finally, if an individual needs to be in the intensive care unit, then they are typically treated with a combination of an IV beta-lactam plus either a macrolide, doxycycline, or a fluoroquinolone.

If an individual in the ICU may have Pseudomonas aeruginosa, then an antipseudomonal beta lactam should be used, like piperacillin-tazobactam, ceftazidime, or cefepime.

And if an individual may have methicillin-resistant staphylococcus aureus, or MRSA for short, then vancomycin or linezolid should be used.

One appearance is a lobar pneumonia, which is where a lobe of the lung is involved and often there are air bronchogram. That’s where the alveoli are opacified, or “white”, and the nearby bronchi are filled with air and appear dark - making them easier to see.

Overall, the most common cause of a lobar pneumonia is Streptococcus pneumoniae, and when it’s suspected, a pneumococcal urine antigen test can be done to confirm the diagnosis.

Other pathogens like Haemophilus influenzae and Moraxella catarrhalis are sometimes seen in individuals with chronic obstructive pulmonary disease, or COPD.

Another specific cause is Staphylococcus aureus, which typically causes a post-viral pneumonia. That’s where an individual with viral pneumonia, like from influenza, will be on the mend, and then will suddenly get sicker. That’s because the virus damages the epithelial lining of the lungs and makes a bacterial superinfection with Staphylococcus aureus or Streptococcus pneumoniae much more likely.

One group of individuals that develop recurrent pneumonias are those with cystic fibrosis, because the thick mucus in their airways impairs microbial clearance.

Another appearance is a diffuse interstitial pattern on a chest x-ray.

Bacteria that cause this appearance are called atypical bacteria and they include Mycoplasma pneumoniae, Legionella pneumophila, and Chlamydophila pneumoniae. They’re atypical because they’re difficult to grow using standard culture methods, occur in younger adults, and cause milder symptoms.

This pattern is thought to develop because the inflammation is localized to the interstitial walls of the alveoli, but not the alveolar space.

Mycoplasma pneumoniae classically develops among young, healthy individuals who live in close contact with one another like soldiers in military barracks.

Mycoplasma can also cause some unique extrapulmonary findings, like bullous myringitis; which is a blistering infection of the tympanic membrane, as well as autoimmune hemolytic anemia due to the formation of IgM antibodies that agglutinate when exposed to a cold temperature.

Legionella tends to occur in individuals exposed to contaminated water sources, such as hotel air-conditioners or water tanks on cruise ships.

Legionella can also cause extrapulmonary symptoms like relative bradycardia and hyponatremia.

Relative bradycardia is where the heart rate stays the same even if there’s a fever, which is an unusual pattern.

Hyponatremia is thought to be due to a syndrome of inappropriate antidiuretic hormone, or SIADH which causes excess water to get reabsorbed by the kidneys.

If legionella is suspected, a legionella urine antigen test can be done to confirm the diagnosis.

Finally, there are some animal exposures that put an individual at risk. For example, exposure to farm animals and their secretions increases the risk of Coxiella burnetii, also called Q-fever.

Also, exposure to birds like parrots is a risk factor for Chlamydia psittaci.

Exposure to mouse droppings and urine is associated with Hantavirus, which can cause fever, pneumonia and renal failure.