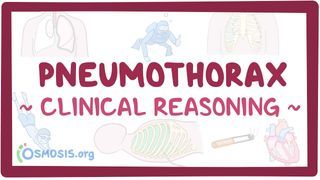 The pleura is the blanket that covers our lungs, and it’s made of two layers, the inner visceral pleura and the outer parietal pleura.

In between those two layers is a space. If air gets in that space, it’s called a pneumothorax.

Pneumothoraces can be classified into two broad categories: spontaneous or traumatic.

Spontaneous pneumothorax is further subclassified into primary and secondary.

A primary spontaneous pneumothorax occurs without a triggering event in an otherwise normal lung.

Then there’s a secondary pneumothorax; that is a spontaneous pneumothorax that occurs in a lung with pre-existing lung disease, like chronic obstructive pulmonary disease, or COPD, cystic fibrosis, or lung cancer.

Traumatic pneumothorax occurs secondary to injury of the pleura after blunt or penetrating trauma to the chest like a stab wound, or as a complication of a procedure, such as a lung biopsy, central line insertion or mechanical ventilation.

In terms of symptoms, a small pneumothorax may cause no symptoms, but typically a pneumothorax causes a sudden-onset of shortness of breath and pleuritic chest pain; which is a sharp knife-like pain that worsens with inspiration due to irritation of the parietal pleura by the expanding lung. It also typically causes tachycardia, tachypnea, or hypoxemia.

Examination of the chest reveals decreased air entry or absent breath sounds on auscultation and hyperresonance on percussion of the affected area.

The diagnosis of a pneumothorax is confirmed by a chest x-ray, which shows a visible “white” visceral pleural line that’s separated from the parietal pleura by pitch “black” gas.

It’s important to distinguish the pleural line from the border of the scapula on a chest X-ray.

Additionally, the normal pulmonary vessel markings that branch from the hilum of the lung suddenly disappear beyond that visceral line.

Now initially, all patients with a primary spontaneous pneumothorax are put on supplemental oxygen, even if they’re not hypoxemic.

The idea behind this is that the air in both the alveoli and the pneumothorax is mostly composed of nitrogen - about 78%.

So by giving oxygen, we make the alveolar air mostly contain oxygen with very little nitrogen. This increases the nitrogen gradient between the pleural space and alveoli, so nitrogen in the pneumothorax will just diffuse from the pleural space to the alveoli, allowing the individual to essentially breathe most of the air in the pneumothorax right out.

Alright, now the subsequent steps of management depend on the size of the pneumothorax on chest x-ray, and the severity of the symptoms.

The size of a pneumothorax is the distance between the visceral and parietal pleura at the level of the hilum.

On the other hand, if the pneumothorax is more than 2 centimeters or the patient is complaining of severe symptoms, then a needle thoracentesis is performed. This involves inserting a catheter into the chest to aspirate the air in the pleural space.

Now, it’s important to insert the catheter above the rib, to avoid damage to the intercostal vein, artery, and nerve, or the “van” running below the rib.

If pleural aspiration fails, then a thoracostomy or chest tube is inserted.

But the difference is that the thresholds are lower, because this individual already has underlying lung disease.