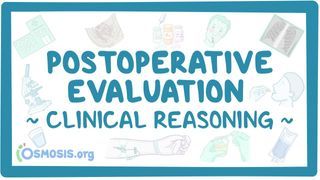 Generally, right after any procedure requiring anesthesia, individuals are monitored in a post-anesthesia care unit or PACU for things like respiratory distress or cardiac complications.

If there’s a concern, an arterial blood gas and a chest X-ray can be obtained.

Also cardiac monitoring is done to assess their heart rate and blood pressure, because postoperatively, individuals are at increased risk cardiovascular complications like hypo- or hypertension, cardiac arrhythmias, myocardial ischemia, and even heart failure.

Individuals are also assessed for their mental status, temperature, pain level, hydration status, ability to pass gas and stool, and presence of nausea or vomiting.

Last but not least, a person’s hydration status along with intake and output - like fluid administration, urine output, bleeding, and wound drainage - are all carefully tracked.

Now, the most common postoperative complication is nausea and vomiting. To help minimize this, inhalation agents which more commonly cause those symptoms, can be avoided.

Instead, total intravenous anesthesia or TIVA can be used along with propofol, which helps with induction and maintenance of anesthesia.

In addition, preventive measures include giving antiemetics like a scopolamine patch at least two hours prior to the induction of anesthesia and removing the patch within 24 hours.

Also dexamethasone - 4 to 8 milligrams can be given intravenously after induction, and this is thought to have a direct antiemetic effect, and help with postoperative pain.

Finally ondansetron - 4 milligrams intravenously, can be given at the end of surgery.

After the surgical procedure, there is likely to be a lot of pain which can also worsen feelings of nausea and vomiting.

Pain control that minimizes or avoids opioids is particularly important. One option is 1 gram of IV acetaminophen or 15 to 30 milligrams of IV ketorolac, as well as local and regional anesthesia.

If there is nausea and vomiting postoperatively, individuals should get a rescue antiemetic that’s from a different drug class from ones used for prophylaxis, unless the first drug has worn off and the person is due for another dose. Some options are 5 to 10 milligrams of IV prochlorperazine or 0.625 milligrams of IV droperidol.

Moving on, there’s postoperative urinary retention, which is when urinary output decreases to less than 0.5 ml per kilogram per hour. Common causes are bladder dysfunction, urethral obstruction, or failure of pelvic floor relaxation.

It’s especially common in women after cesarean delivery done with epidural anesthesia, as well as individuals over 50 years, those with underlying neurologic disease, surgery lasting longer than two hours, and when certain medications like atropine and regional anesthesia have been used.

Now, in individuals who can’t void urine within four hours after surgery, the bladder volume has to be measured either with ultrasound or by draining the bladder with catheterization.

If more than 600 milliLiters is measured on ultrasound, or if there’s suspected inaccuracy of the ultrasound measurement - due to body habitus, tissue edema, or prior surgery with scarring, then a one-time bladder catheterization is done.

If the urine volume that’s drained in the first 10 to 15 minutes after bladder catheterization exceeds 400 milliLiters, the catheter is left in place. These individuals require bladder drainage and decompression with an indwelling catheter or clean intermittent catheterization to prevent overdistention injury, which occurs occur when the bladder is filled to greater than 120 percent of its regular capacity - which is about 400 to 600 milliLiters.

Bladder decompression can be done with urethral catheterization.

However, in individuals who have had recent urologic surgery, urethral catheterization is contraindicated, so they should have suprapubic catheterization.

Clean intermittent catheterization is another option for bladder decompression, especially for outpatients who are comfortable with managing the catheter and individuals with acute-on-chronic urinary retention who are expected to require long-term catheterization.

Another postoperative issue is a paralytic ileus. That’s when there’s obstruction of the intestine due to paralysis of the intestinal muscles - so there’s no passage of gas or stool.

Other signs and symptoms may include abdominal pain, distention, bloating, nausea or vomiting, and a loss of appetite.

A prolonged postoperative ileus is when it persists for more than three days.

Management of a prolonged postoperative ileus includes plain abdominal radiographs to ensure that there isn’t a small bowel obstruction or bowel perforation.

Supine and upright plain abdominal radiographs may show dilated loops of bowel in individuals with postoperative ileus, but should demonstrate air in the colon and rectum without a transition point between the dilated and non dilated bowel, which would indicate a bowel obstruction, and no evidence of free air to suggest perforation.

Treatment is supportive care, including pain control that minimizes opioids, IV fluid and electrolyte therapy, dietary restriction, and placement of a nasogastric tube for gastrointestinal decompression for those with persistent nausea or vomiting.

Individuals should be closely monitored, with additional imaging if the individual doesn’t improve over 48 to 72 hours.

Finally, both hypothermia and hyperthermia can occur in the immediate postoperative period.

Hypothermia occurs in nearly all individuals intraoperatively, and there are various perioperative warming strategies to help deal with this.

There are prewarming strategies - so before induction of anesthesia with an active skin warming system or the preoperative administration of vasodilatory drugs; passive insulation with warmed hospital cotton blankets; and finally ways to actively warm the body like warmed IV fluids and warm inspired gases.

Perioperative hyperthermia is far less common than hypothermia. Causes include excessive perioperative heating, an acute transfusion reaction, an adverse effect of medication, or a fever.

To treat hyperthermia, the first thing is to remove any sources of excessive heating, and to evaluate for other signs of a transfusion reaction or an adverse reaction to a medication.

If the source seems to be a fever, defined as 38 celsius degrees or 100.4 Fahrenheit degrees, then the timing of the fever is a big clue.

The most common causes of postoperative fever may be summarized by a mnemonic beginning with the letter W – Wind, Water, Wound, Walking, Wonder Drugs, and Waterway. This roughly follows the time frame after surgery when many of these complications tend to develop.

Wind refers to pulmonary conditions, like pneumonia, whereas atelectasis is no longer thought to be a cause of fever. These conditions occur between postoperative days one and two.

Then there’s water, which refers to urinary tract infections, and generally occur between postoperative days three to five.

Wound refers to surgical site infections, which tend to occur from day five to seven.

Walking refers to venous thromboembolisms, so deep vein thrombosis or pulmonary embolism, which may develop due to immobility and generally occur after postoperative day five.

Wonder drugs refers to febrile reactions to blood products and medications - so malignant hyperthermia or drug fever, which may occur anytime upon exposure to the triggering agent.

Finally, waterway refers to bloodstream infection due to an intravascular catheter, and this can occur anytime.

So the most common causes of an immediate fever are medications or blood products, trauma suffered prior to surgery or as part of surgery, infections present prior to surgery, and, rarely, malignant hyperthermia.

Malignant hyperthermia is due to an autosomal dominant disorder that causes a hypermetabolic crisis when individuals are exposed to triggers.