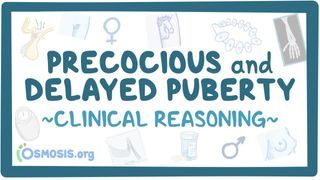 Transcript for Precocious and delayed puberty

Puberty is the natural process of sexual maturation, occurring around the age of 11 for females and 11.5 for males. When it begins too early, it’s called precocious puberty, and when it starts too late, it’s called delayed puberty.

Now puberty is normally under the control of the hypothalamic-pituitary-gonadal axis. It begins when the hypothalamus starts releasing the gonadotropin-releasing hormone or GnRH, which eventually makes its way through the hypophyseal portal system to the hypophysis.

Here, GnRH stimulates the pituitary gland to release the two gonadotropin hormones: luteinizing hormone, or LH, and follicle-stimulating hormone, or FSH, into the blood. These two hormones then signal the ovaries and testes to release sex hormones, mostly estrogen in females and testosterone in males.

Sex hormones then trigger the maturation of the sex organs and the development of secondary sexual characteristics.

These sex-specific physical characteristics can be evaluated with the Tanner scale, which represents a predictable set of steps that males and females go through at puberty.

There are five stages: In stage 1, the pre-pubertal stage, no pubic hair is present in either sex. Males have a small penis and testes. Females have a flat-chest.

In stage 2, around a mean age of 10, soft pubic hair appears; there is a measurable enlargement of the testes; and breast buds appear.

In stage 3, around a mean age of 12, pubic hair becomes coarser; the penis begins to enlarge in both size and length; and breast mounds form.

In stage 4, around a mean age of 13, pubic hair begins to cover the pubic area; the penis begins to widen; and breast enlargement continues to form a “mound-on-mound” contour of the breast.

In stage 5, usually after the age of 14, pubic hair extends to the inner thigh; the penis and testes have enlarged to adult size; and the breast takes on an adult contour.

Puberty lasts for about 4 years, depending on factors such as race, genetic background, and geographical region.

Precocious puberty is defined by the onset of secondary sexual characteristics before age 8 in females or age 9 in males. It can be classified based on the underlying pathologic process into three entities.

First, in central or gonadotropin-dependent precocious puberty the hypothalamic-pituitary-gonadal, or HPG axis, is prematurely activated, leading to an increase in LH and FSH secretion. Common causes include brain tumors like optic nerve gliomas; cranial radiotherapy; or brain trauma among many other things. Usually, there’s no identifiable pathology and it’s simply called idiopathic central precocious puberty.

Second, in peripheral or gonadotropin-independent precocious puberty, the hypothalamic-pituitary-gonadal axis is suppressed due to a negative feedback loop triggered by excess sex hormones. The excess could be caused by an ovarian or testicular tumor; genetic conditions like McCune-Albright syndrome; dysfunction of other glands like the thyroid or adrenal gland; or exogenous sex hormones from medications and creams.

And third, there are also benign or non-progressive pubertal variants marked by a premature but isolated secondary sexual characteristic.

Premature thelarche or early development of breast in girls is due to an increase in LH or FSH and is non-progressive.

Premature adrenarche is when pubic or axillary hair appears prior to the age of 8 years in girls and 9 years in boys, due to increased secretion of androgens by the adrenal glands.

The initial evaluation begins with an assessment of the secondary sexual characteristic and Tanner staging.

Next, growth should be assessed with the help of old and new measurement of height, weight, and height velocity plotted in reference curves.

Height velocity or the rate at which individuals grow within a year is considered accelerated if it’s over 6 centimeters per year or more than the 95th percentile for age.

X-rays of the left hand and wrist are used to measure the bone age, which is determined by analyzing the individual’s pattern of ossification since it is fairly age specific.

Additionally, the testicles must be measured with the Prader orchidometer. They are considered enlarged if they’re over 4 milliliters in volume or 2 and a half centimeters in length before age 10.

Now, if during Tanner staging, only premature thelarche or adrenarche was detected in females aged 7 or older or in males without testicular enlargement; if linear growth is normal; and if the bone age is normal for their chronological age, then the individual has a benign variant of pubertal development. In this case, no further testing is required but follow-up is recommended to see if there’s any progression.

Pubertal progression would be considered slow if there is minimal or no change in breast development, pubic hair, genital development, or height velocity during six or more months of observation.

By contrast, in all females younger than 6; all males with testicular enlargement; anyone that has more than one secondary sexual characteristic, height velocity above the 95th percentile for age or with advanced bone age, additional testing should be considered.

Ok so, the initial evaluation can also help figuring out if the cause is central or peripheral by looking to see if the normal sequence of puberty is respected.

In males, first there’s an increase in testicular size, six months later the penis and pubic hair start to grow, and around two years later sperm starts to appear in the urine.

On the other hand, those with peripheral precocious puberty are more likely to display deviations from the normal sequence.

As an example, in a person where menstrual bleeding starts within one year and not 2 of the onset of breast development, the cause is more likely peripheral rather than central.

Additionally, seeing if the secondary sexual characteristics respect the sex of the individual might also help. In central precocious puberty they do, whereas in the peripheral variant, there might be isolated features of virilization in females or isolated feminization in males.

Hormonal lab tests, including serum levels of LH, FSH, estradiol in females, and testosterone in males, are required to confirm if the cause of the precocious puberty is central or peripheral.

So in central precocious puberty, basal serum LH is usually increased over 0.3 international units per liter. FSH paints the same picture and increases, but it has limited diagnostic value. Estradiol and testosterone values are usually increased, although the values differ from one lab test to another.

When lab results are inconclusive, a GnRH stimulation test may help differentiate central precocious puberty from a benign variant. This test consists of measuring serum LH levels before and 60 minutes after a dose of 20 micrograms per kilogram of a GnRH agonist called leuprolide acetate.

If LH is stimulated above 3.3 international units per liter, it suggests central precocious puberty. If LH levels are under this value, a benign variant of puberty might be considered.

Now, in females, because in central precocious puberty the cause is mostly idiopathic, conclusive hormonal data with alongside relevant clinical signs and the absence of symptoms depicting another underlying pathology, can confirm the diagnosis without needing further testing.

A brain MRI might be needed in males, where central precocious puberty is very rare, or in any case where there’s clinical evidence of central nervous system involvement like dizziness or visual disturbances.

Now, going back to our table, in peripheral precocious puberty, LH is under 0.2 international units per liter, FSH can be decreased too, and estradiol or testosterone are highly increased.

Peripheral precocious puberty requires further testing in all cases. Ultrasound of the ovaries in females or the testicles in males might detect a tumor; if an adrenal pathology is suspected, for example when there is rapid virilization, an adrenal ultrasound plus serum adrenal androgens measurements might also help confirm the diagnosis.

Treatment may be indicated in some of the cases, some examples include when the predicted height, based on bone age, is less than 5 feet in females or less than 5 feet 5 inches in males; in those with puberty onset before 7 years of age; to prevent early menarche; or if puberty is rapidly progressing. It consists of gonadotropin-releasing hormone analog administration, usually leuprolide either 7.5 milligrams monthly or 22.5 milligrams at 3-month intervals. Histrelin acetate can be administered yearly with a single subcutaneous implant.

Treatment usually lasts until 11 years in females and age 12 years in males.