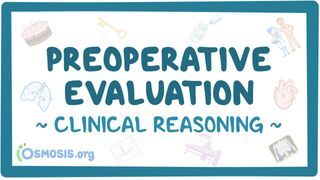 A preoperative evaluation is done before an individual can undergo surgery, to assess their health.

This is important because surgery and anesthesia are stressful events that can exacerbate underlying diseases.

The goal of a preoperative evaluation is to identify diseases and risk factors that can increase the risk of surgery and anesthesia, and to come up with strategies to reduce that risk.

If the surgery is an emergency, the physical status classification is followed by “E” for emergency.

In addition to the ASA physical status, other operative risk factors include age, comorbid conditions in addition to systemic diseases, the operative procedure, the type of anesthesia, and finally the surgical team and resources.

That includes the surgical and anesthesia team, duration of surgery and anesthesia, equipment, medications, blood, and postoperative care.

The first key risk factor is age, and much of the risk associated with age is due to comorbidities like cognitive and functional impairment, malnutrition, and frailty.

Next is exercise capacity, because those with good exercise tolerance generally have low risk.

Next is a complete medication history, specifically including over-the-counter, complementary, and alternative medications, which could cause an increased risk of bleeding.

Most medications should be continued up to and including the morning of the operation, but some should be discontinued preoperatively.

For example, monoamine oxidase Inhibitors or MAOIs may need to be stopped 2 weeks before surgery because of the risk of drug-drug interactions with anesthesia medications.

In some high-risk cases for venous thromboembolism, the oral contraceptive pill may need to be discontinued 4 weeks before elective surgery because of the increased risk of venous thrombosis.

In contrast, selective cyclooxygenase-2 or COX-2 inhibitors, and other non-aspirin NSAIDs, are okay to continue until surgery if there is no significant bleeding risk with the procedure.

On the other hand, if there is a significant bleeding risk, then the timing of discontinuation depends on the specific NSAID.

In addition, individuals should be asked about alcohol, smoking, and illicit drug use.

Alcohol and smoking increase the risk of surgical site infections and cardiopulmonary complications.

Individuals with chronic opioid use may have tolerance and require higher than usual opioid doses in the intraoperative and postoperative period.

Those who abuse barbiturates, or amphetamines are at risk for drug withdrawal in the postoperative period since they won’t be getting access to these drugs.

It’s also important to identify a personal or family history of anesthesia complications like malignant hyperthermia, which is a rare complication of anesthesia that can be due to an inherited condition that’s autosomal dominant.

At the time of the initial preoperative evaluation, a brief self-administered questionnaire is completed to determine functional exercise capacity, including the ability to climb up a flight of stairs, walk up a hill, walk at ground level at 4 miles per hour, or perform heavy work around the house.

Individuals that are able to perform these tasks have a good exercise capacity, and need no further testing or preoperative cardiac evaluation, regardless of the risk of the planned procedure.

On the other hand, having a poor preoperative exercise capacity is considered an important risk factor for cardiovascular and other complications.

iIt’s also specifically important to ask about cardiac symptoms and conditions such as individuals with a myocardial infarction in the previous 60 days, or with unstable angina, decompensated heart failure, significant arrhythmias, or valvular heart disease that affects their hemodynamics.

These individuals are at very high risk for perioperative myocardial infarction, ventricular fibrillation or primary cardiac arrest, complete heart block, or heart failure, or even death.

To better estimate cardiac risk, it’s important to check for symptoms of coronary heart disease, such as angina, dyspnea, syncope, or palpitations, as well as any history of ischemic, valvular, or cardiomyopathic heart disease or congestive heart failure.

Finally, it’s important to determine if the surgery is considered high-risk for major adverse cardiac events, such as intrathoracic, intraperitoneal, or suprainguinal vascular procedures.

These elements make up the Revised Cardiac Risk Index.

The physical examination should focus on the cardiovascular system, including the blood pressure, auscultation of the heart and lungs, abdominal palpation, and examination of the extremities for edema and vascular integrity.

For those with known heart disease that are undergoing an immediate or high-risk surgery, a resting 12-lead ECG should be done.

ECG may also be done for asymptomatic individuals undergoing high-risk surgery; as well as for individuals with at least one risk factor for coronary heart disease - such as obesity, diabetes, smoking, hypertension, or hyperlipidemia - or with or poor exercise tolerance.