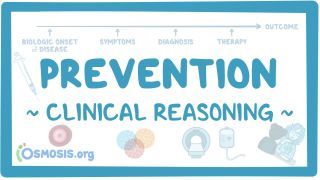 In epidemiology, there are three different types of prevention—primary, secondary, and tertiary.

To get a clearer picture of what each type of prevention is and when it occurs, let’s first take a look at a timeline of the natural history of a disease, and we’ll use cervical cancer as an example.

Cervical cancer is cancer of the cervix, and around 13 thousand women are diagnosed each year.

Most cases of cervical cancer are diagnosed in women ages 35 to 44, though older women are also at risk.

In the natural history of a disease, the first step is the biologic onset of the disease.

So, in the case of cervical cancer, this is when a group of cells in the cervix become cancerous and begin to rapidly divide, forming a tumor.

At this stage, the person probably doesn’t even realize that they have the disease, since they’re still asymptomatic.

At some point later, symptoms will start to show, like vaginal bleeding after sexual intercourse, or having unusual vaginal discharge.

And at this point, the person might go to a health clinic to talk with someone about their symptoms, and they’ll be diagnosed with cervical cancer.

Finally, the person will receive some type of treatment, like radiation therapy or chemotherapy, and this will eventually lead to an outcome, like remission, or in severe cases, death.

Now, this progression can be split into two phases.

Now, let’s talk about how prevention fits into this timeline.

The first type of prevention is primary prevention, and it’s all about stopping the onset of disease.

And this is what you probably think of when you hear the word ‘prevention’, and one way to remember this is because primary and prevent both start with the letter P.

In primary prevention, you’re trying to ensure that the person never develops the disease in the first place, so it happens at the very beginning, even before the biological onset of the disease.

Oftentimes, primary prevention involves changes to a person’s lifestyle to avoid exposure to risk factors, or factors that make it more likely to get the disease.

For example, women who smoke are around twice as likely to get cervical cancer compared to women that don’t smoke, so smoking cessation is one primary prevention recommendation for women at risk of cervical cancer.

Another type of primary prevention is vaccination, because vaccination can reduce the risk of disease caused by certain viruses.

For example, the human papillomavirus, or HPV, is a group of viruses that can be spread through sexual contact, and it causes the growth of papillomas, which are commonly referred to as warts.