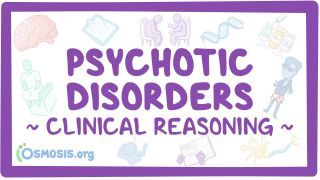 Psychotic disorders are a group of conditions - including schizophrenia - that are characterized by individuals having difficulty thinking clearly, making good decisions, distinguishing reality from imagination, and behaving appropriately.

This makes it very hard to handle daily life and social interactions, and if symptoms go untreated, individuals are at risk of harming themselves.

The underlying pathophysiology is still mostly a mystery, but there are some clues. Some psychotic disorders such as schizophrenia run in families, which suggests a genetic basis, and it’s also thought to be related to trauma, drug abuse, stress, infections, and autoimmune disorders.

Another clue is that some individuals benefit from antipsychotic medications which block the dopamine receptor D2, which suggests that for those people, excess dopamine levels may contribute to the disease.

In fact, interestingly, one of the most effective antipsychotic drugs, clozapine, is a weak D2 antagonist.

Now, according to DSM-V, psychotic disorders include seven main disorders distinguished by the duration and severity of symptoms, and the presence of mood episodes - either depressive, manic or hypomanic ones.

Depressive episodes persist for a two-week period and consist of diminished interest or pleasure in activities, significant weight loss or gain, inability to sleep or oversleeping, psychomotor agitation, feelings of worthlessness, decreased ability to think, and finally recurrent thoughts of death, or suicidality.

Schizophrenia is the most common psychotic disorders.

These psychotic disorders have a few key symptoms that fall into one of three categories: positive, negative, and cognitive symptoms.

Positive symptoms are those that are “in addition” to normal experiences. Things that really shouldn’t exist - like pineapple on pizza.

Delusions are false beliefs that remain despite factual evidence.

Persecutory delusions are when individuals falsely believe they are going to be harmed or harassed by other people or organizations.

Referential delusions consist of beliefs that certain gestures or comments from people are aimed directly at them, like a person believing that a television news anchor is secretly sending messages directly to them.

There are also grandiose delusions – which is when individuals believe they have exceptional abilities, wealth, or fame, and erotomanic delusions – where people falsely believe that another person is in love with them.

Lastly, there are nihilistic delusions where people think a major catastrophe will occur, and somatic delusions which focus on health, for example, people believing they’re infested with a parasite.

Hallucinations are also positive symptoms, and they’re perceptions that happen without any external stimulus like hallucinogenic drugs.

Auditory hallucinations involve hearing familiar or unfamiliar voices and sounds, and these are most common.

There can also be visual or tactile hallucinations. These feel like real sensations and occur when a person is fully awake, rather than being thoughts.

Disorganized speech is another positive symptom, and it’s when individuals hop from one conversation topic to another with loose associations. Sometimes, the speech is so severely disorganized that it is nearly incomprehensible – and that’s called "word salad."

Grossly disorganized or abnormal motor behavior is the last positive symptom, and it can range from childlike "silliness" to unpredictable agitation.

One extreme is catatonic behavior, where a person becomes very unreactive to their environment.

Catatonic behavior can manifest as negativism or resistance to movement, for example maintaining a rigid and bizarre body posture like a twisted limb, or being completely still or unresponsive.

There’s also cases of excessive movement without an obvious cause – and that’s called catatonic excitement.

Negative symptoms represent the absence of a normal behavior, and these are highly associated with schizophrenia and are less prominent in the other psychotic disorders.

For example, there may be affective flattening characterized by diminished emotional expression in the face, reduced eye contact, less speech intonation, and a decrease in limb movements that normally help give an emotional emphasis to speech.

There are many descriptors that are used. Avolition is when individuals show decreased interest in activities like get-togethers, hobbies, or work.

Asociality is similar to avolition, but is more narrow, referring to decreased interest in social interactions.

Alogia is when people speak using very few words. For instance, when individuals are asked “do you have any children?”, they might respond with “yes”, instead of “yes, one boy and two girls”.

Finally there are cognitive symptoms, which include difficulty understanding concepts and expressing thoughts, as well as a poor memory.

Now, schizophrenia is a psychotic disorder that causes symptoms in all three of these categories.

A diagnosis requires that two or more symptoms - either positive, negative, or cognitive - must occur during a one-month period.

Also, at least two of the symptoms should be delusions, hallucinations, or disorganized speech, and they should negatively affect the person’s life in terms of work, self-care, or interpersonal relations.

Typically, only negative symptoms and two or more milder versions of the positive symptoms are part of the prodromal and residual signs.

For example, individuals may express unusual beliefs that are not as extreme as delusions, like strongly believing magic is real, or having unusual perceptual experiences like sensing the presence of a monster, but never actually seeing it.

First, there’s the prodromal phase, where they become withdrawn.

Second, there’s the active phase, where they have positive and negative symptoms, especially delusions and hallucinations.