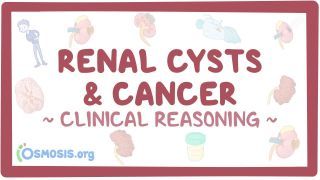 Transcript for Renal cysts and cancer

Renal masses can develop in both adults and children, and sometimes, they’re due to genetic mutations.

These masses may be either cysts or tumors, and they can be discovered incidentally during an abdominal ultrasound or a CT-scan or when an individual has symptoms like abdominal or flank pain.

Renal cysts can be simple or complex, and they can also be solitary - meaning there’s just one cyst, or there can be multiple cysts - sometimes affecting both kidneys.

Simple cysts are the most common type of renal mass, and they typically occur in adults with otherwise healthy kidneys.

On an abdominal ultrasound, they’re usually smaller than 1 centimeter, but can be up to 4 centimeters. They’re round and have a thin regular wall and are filled with liquid which makes them anechoic - so it basically looks like a small balloon filled with black fluid.

Additionally, there can also be some fine septa and calcifications within the simple cyst.

On the other hand, complex cysts are larger than 1 centimeter. On an ultrasound, they have thick, irregular walls and are multilocular- meaning they have septations within, that separate the cyst cavity into compartiments.

Complex cysts can cause symptoms like flank pain, and they can cause complications like infections, hemorrhage, and hypertension.

An infected cyst can cause symptoms like fever and fatigue.

Sometimes, the infection can spread to the renal parenchyma, causing an acute pyelonephritis with symptoms like fever, acute flank pain or diffuse abdominal tenderness.

A CBC shows leukocytosis and neutrophilia, and the ESR and CRP are elevated.

If the infection is limited to the cyst, then the urinalysis may be normal, whereas if the cyst causes acute pyelonephritis then pyuria, bacteriuria and proteinuria are present.

An ultrasound can show a thick cystic wall.

The initial treatment of an infected cyst is empirical. If the symptoms are mild, then an oral fluoroquinolone like ciprofloxacin or trimethoprim-sulfamethoxazole is given for 4 to 6 weeks.

If the blood or urine cultures identify a pathogen, then the antibiotic is adjusted accordingly.

Now, if the individual doesn’t respond to antibiotic therapy within 72 hours or has persistent fevers for more than a week, then a CT-scan is done.

If the cyst is larger than 3 centimeters, then percutaneous drainage may be needed.

Another complication is cystic hemorrhage which can cause hematuria.

If there’s severe bleeding that causes hemodynamic instability, a blood transfusion may be required, and with persistent bleeding, segmental arterial embolization, or surgery may be needed.

Finally, hypertension occurs when one or more cysts compress the renal parenchyma. In part, that’s because the epithelial cells that form the wall of the cysts release renin, which stimulates angiotensin and aldosterone, causing vasoconstriction of the renal artery and sodium retention, leading to hypertension.

Treatment relies on ACE inhibitors - like captopril, or angiotensin receptor blockers - like candesartan, with a goal of keeping the blood pressure below 125/75 mmHg.

Now, every complex cyst, regardless of whether there are complications, should be further worked up to see if there’s an underlying malignancy. That starts with a urinalysis, which might show hematuria.

Also an abdominal CT-scan with contrast should be done to classify the cyst according to the Bosniak system - which has 5 grades - I, II, IIF, III, and IV.

The higher the grade, the more malignant it appears on the CT scan.

Sometimes, the diagnosis is still uncertain after CT and MRI scans, and in those situations a percutaneous needle biopsy may be done to determine whether the cyst is benign or malignant.

Now, in terms of the grades - grade I and II are simple cysts.

With grade I, there’s a single cyst or multiple cysts without septa or calcifications.

With grade II, there are only fine septa and calcifications may be seen within the cyst.

Grade I and grade II cysts have no malignancy risk, so no further evaluation is needed.

Next, there’s a grade IIF cyst - which is between grade II and grade III; there are multiple fine septa within the cysts, the wall is thickened, and there are calcifications in the wall or septa. There’s a low risk of malignancy, so an abdominal CT-scan or an MRI is done within 6 months to see if the cyst has gotten bigger - in which case surgical resection may be needed.

With grade III and grade IV cysts, there are many septations within and the wall is thick and irregular.

About half of grade III cysts, and nearly all grade IV cysts are malignant, so surgical resection of the cyst or radiofrequency ablation are frequently needed.

Radiofrequency ablation involves using a radiofrequency generator, to generate high-frequency current to heat a needle. That hot needle is inserted into the tumor, which destroys the tissue.

RCC originates in the renal cortex, and it’s the most common type of renal cancer in the elderly.

Some individuals are asymptomatic and diagnosed incidentally when a renal mass is found on an abdominal CT-scan. Others have symptoms, and the classic triad is flank pain, hematuria, and palpable abdominal mass.

Lab studies include a CBC- which may show anemia or in rare cases, erythrocytosis- when the tumor secretes erythropoietin.

If there’s a high alkaline phosphatase, bone scintigraphy is done to check for bone metastasis.

Finally, if there’s a paraneoplastic syndrome, the serum calcium may be elevated because RCC can increase the release of calcium from bone.