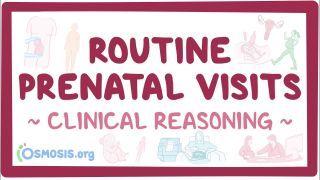 Prenatal care refers to evaluations that can be done during pregnancy, to assess maternal and fetal health, and intervene when possible to ensure the birth of a healthy baby with minimal risk for the mother.

Prenatal care also includes preconception counseling, which seeks to identify a spectrum of social, behavioral, environmental, and biomedical risks to a woman's fertility and pregnancy outcome with the goal of reducing these risks through education, counseling, and appropriate intervention.

Now, pregnancy consists of three trimesters, the first lasting for the first 12 weeks of pregnancy, the second between weeks 13 and 27, and the third from weeks 28 to 40, and during each of these trimesters, the obstetrical consult focuses on different aspects of maternal and fetal health.

Prenatal visits are usually done every 4 weeks until week 28, every two weeks from week 28 to 36, and then weekly until delivery.

So, the initial prenatal visit may occur either when the individual suspects they are pregnant, or because they wish to conceive in the near future.

No matter the case, at the initial prenatal visit, the history should be focused on obstetrical history, family history, and identifying any potential risks during pregnancy.

The obstetrical history comprises of gravidity, parity and abortions.

Gravidity, or G, means the number of times the individual has been pregnant so far, including the current pregnancy.

Parity, or P, refers to the number of times the individual has carried the pregnancy to a viable gestational age - meaning more than 24 weeks.

Finally, abortions, or A, refers to the number of pregnancies that were lost for any reason.

Also, a detailed family history with a focus on genetic conditions should also be obtained.

In some individuals, genetic counselling and genetic carrier screening is indicated before conception.

For example, when there’s a strong family history of cystic fibrosis, or sickle cell disease, individuals can benefit from genetic testing to see if they and/or their partner have the mutation, and genetic counselling could help them make the best reproductive decision.

Genetic counselling is also recommended in inbred families, as autosomal recessive disorders are more frequent in these situations.

The rest of the history focuses on identifying and correcting any potential risks, such as chronic medical problems, like diabetes, hypertension, or epilepsy, mental health disorders, like depression, and use of medications known to be teratogenic, such as valproic acid, isotretinoin, or some dietary supplements.

Information about lifestyle factors, like nutrition, exercise, and the use of tobacco, alcohol, or illicit drugs, and environmental concerns, such as mercury, lead or pesticide exposure at home or at work should also be assessed.

Finally, social concerns, like the possibility of domestic abuse, as well as other potential barriers to care, like remote living and economic constraints, should be identified and addressed.

Core interventions that can be done to minimize maternal and fetal risk following this step are to stop teratogenic medications, like isotretinoin, or switch to a less harmful alternative in case of chronic health conditions.

For example, individuals with hypertension, antihypertensives can be used during pregnancy include labetalol, methyldopa or calcium channel blockers like nifedipine.

Seizure control in individuals with epilepsy can be achieved with lamotrigine or levetiracetam, which provide adequate seizure control without teratogenic risk.

Finally, folic acid supplementation with 0.4 milligrams per day is indicated to prevent neural tube defects, or NTDs, in the fetus. This can be done as early as 3 months preconception, but if the initial prenatal visit occurs when the individual is already pregnant, supplementation should start on the day of the visit, and continue throughout the pregnancy.

In individuals who are at higher risk of having a child with NTDs, like those who have had a previous pregnancy with NTDs, a family history of NTDs, or those who are using valproic acid, higher doses, of up to 4 milligrams per day are recommended for the first 12 weeks of pregnancy, and the dose can be lowered to 0.4 milligrams for the rest of the pregnancy.

Next, a physical exam and a laboratory evaluation should be done in both a preconception setting, and if the individual suspects they are pregnant.

The body mass index, or BMI, should also be calculated, and weight loss or weight gain should be recommended in individuals with a BMI over 25, or, respectively, under 18.5.

The laboratory evaluation comprises of establishing a baseline hemoglobin and hematocrit, determining the individual’s blood group and RH status, and screening for infections and, in some cases, screening for other diseases that could have an adverse impact on the fetus, like diabetes.

Specifically, a blood sample is taken to screen for infections like HIV, syphilis and viral hepatitis, and to document immunity against diseases like rubella and varicella.

If a sexually transmitted infection is diagnosed, treatment should be initiated immediately.

Likewise, if there are low IgG antibody titers against rubella virus and varicella zoster virus, vaccination should be done before pregnancy - that’s because these are live attenuated vaccines, and they may cause adverse effects to the fetus if given during pregnancy.

Additionally, pregnancy should be postponed for 1 to 3 months following vaccination.

If low antibody titers are found during pregnancy, vaccination is postponed until after the pregnancy.

A full pelvic exam should be done, including an ultrasound to look for any anatomic abnormalities, like uterine fibroids, that may complicate pregnancy, as well as a pap smear to screen for cervical cancer, if one hasn’t been done in the past 3 years.

Cervical swabs are also taken to screen for chlamydia and gonorrhea.

The earliest visible sign of pregnancy is the presence of an anechoic gestational sac - which looks like a tiny black bubble, and can be detected as early as 3 to 5 weeks after the last missed period.

Then, the estimated date of delivery, or EDD, should be calculated based on the first day of the last menstrual period, or LMP.

There are a lot of apps and online calculators that do this for you, but a simple way to calculate it yourself is to use Naegele’s rule, which says that the EDD is the first day of the LMP, plus one year, minus 3 months, plus 7 days.

The ultrasound can also distinguish between single and multiple gestations, and rule out ectopic pregnancy, which is when the fetus implants somewhere other than the uterine cavity, most frequently in the fallopian tube, and a molar pregnancy, which results from errors in normal fertilization, and leads to the formation of an abnormal placenta, and no fetus.

Ok, now, aside from genetic carrier screening, there are other tests can be done to screen for fetal aneuploidies, which means chromosome number abnormalities.

The most common aneuploidies are Down syndrome, Edwards syndrome, and Patau syndrome, which are also called trisomy 21, 18 and 13.

During the first trimester, the combined test can be done, usually between weeks 10 and 13. This test includes an ultrasound nuchal scan, or nuchal translucency scan, which measures the sonographic thickness of the fluid under the fetus’s neck, and measuring serum levels of pregnancy-associated plasma protein A, or PAPP-A levels, for short, and serum levels of free beta hCG. Based on this test, the risk category is established for each of the aneuploidies.

When nuchal translucency, or NT, for short, is very large, more than 4 millimeters, and PAPP-A levels are very low, and serum free beta HCG is high, that means high risk for Down syndrome.

Finally, when nuchal translucency is increased, but not quite as much as with Down’s, and PAPP-A and free beta HCG levels are very low, and low, respectively, that’s high risk for trisomy 13.

During the second trimester, screening was classically done with the triple test, which measured serum levels of serum alpha-fetoprotein, of AFP, unconjugated estradiol, or uE3, and free beta-hCG.

Nowadays, the quadruple test is performed, which is the same as the triple test, but also includes inhibin A levels.

The quadruple test is usually done between weeks 15 and 18. When all are decreased, and free beta hCG is unchanged, that’s high risk for Down syndrome.

When AFP is low, uE3 and free beta hCG are very low, and inhibin A levels are unchanged, that’s high risk for trisomy 18.

Finally, when all levels are unchanged, that could mean trisomy 13 in the context of high risk first trimester screening results.

It’s important to note that these tests don’t diagnose an aneuploidy, but rather establish if there’s a high risk for it.

Regardless of which screening test was done, an invasive procedure like chorionic villus sampling between weeks 10 and 13, or amniocentesis between weeks 15 and 18, with subsequent fetal karyotyping is considered the gold standard diagnostic test, and it’s recommended for individuals in the high risk group, especially those who are considering termination of pregnancy in case of a positive result.

Finally, a special mention regarding screening tests is that high maternal serum AFP levels could suggest a high risk of neural tube defects in the fetus.

Until week 24, the most important part of prenatal evaluation aside from genetic screening and routine investigations like blood pressure, hemoglobin and hematocrit, and a urinalysis and urine culture, is the obstetric ultrasound.

Between weeks 18 and 22, the ultrasound focuses on detecting fetal abnormalities, like renal defects, for example.

An ultrasound can also diagnose cervical insufficiency, which is when there’s cervical dilation and effacement, which means thinning, too early in the pregnancy. This translates as a cervical length on ultrasound less than 25 mm, and carries an increased risk of second trimester pregnancy losses or preterm births.

Cervical insufficiency is treated with cervical cerclage, which is when a strong suture is sewn into and around the cervix, and this is done before week 24.

At the prenatal visits before weeks 24 and 28, things get a bit more specific.

So we’re still measuring hemoglobin and hematocrit to screen for anemia, measuring blood pressure to look for the possible onset of a hypertensive disorder of pregnancy, like preeclampsia.