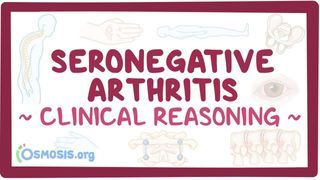 All of them are negative for rheumatoid factor, they’re all positive for HLA-B27, and they typically all run in families.

Another feature they share is that they usually affect the bones in the spine and nearby joints. That’s why they’re sometimes called seronegative spondyloarthritides, where spondylo means vertebra.

Other features include inflammatory back pain that causes morning stiffness which improves after 30 minutes of movement.

These diseases also cause peripheral arthritis that’s generally asymmetric, and axial arthritis like sacroiliitis and spondylitis, affecting the sacroiliac and vertebral joints, respectively.

Individuals also present enthesitis – meaning inflammation at the sites where tendons or ligaments insert into the bone and dactylitis, also known as sausage fingers.

They also cause extra-articular symptoms like involvement of the eyes with anterior uveitis, skin with psoriasis, the heart with aortic regurgitation or pericarditis, genitourinary involvement due to nerve compression at the spinal cord, and gastrointestinal involvement with inflammatory bowel disease - both Crohn's disease or ulcerative colitis.

Seronegative spondyloarthritides typically have a good response to NSAIDs and an elevated CRP in blood tests.

Once the criteria for a seronegative spondyloarthritis have been met, it’s time to figure out which one it is.

First up is ankylosing spondylitis. It typically affects young males, causing fever and pain and stiffness in the low back, hips, buttocks, and thighs, especially in the mornings or after sitting still for a long time.

Initially, individuals have relapsing-remitting pain, meaning that the symptoms are at times worse - relapsing, and at other times they’re improved or gone - remitting.

And over time, there’s joint destruction and bony growth on top of the destroyed joint, which can lead to ankylosis, meaning joint stiffness, and ultimately a loss of mobility.

In the spine, the gentle lordosis, or swayback, of the lower spine and the neck are balanced by a gentle kyphosis, or hunchback, in the upper spine. These curves work in harmony to keep the body’s center of gravity aligned over the pelvis.

But in ankylosing spondylitis, ongoing inflammation can lead to loss of the normal lumbar lordosis, with thoracic kyphosis and compensatory cervical hyperextension.

In fact, the pain paradoxically improves over time because the inflammatory process dies down as the joint gets completely obliterated.

If ankylosing spondylitis is suspected, spinal involvement must be assessed with physical exam maneuvers.

In the cervical spine, flexion deformity is measured through the occiput-to-wall test. That’s where an individual is asked to stand erect with heels and buttocks against a wall and to try and extend his or her neck and touch the wall, while keeping the chin horizontal.

Healthy individuals can do this without any trouble, so if there’s distance between the occiput and the wall, that reflects the degree of cervical deformity.

In the thoracic spine, the range of motion of the costovertebral joints is measured by the degree of chest expansion at the level of the xiphoid.

The individual is asked to raise their arms above their heads and exert a maximal forced expiration, followed by a maximal inspiration, and measurements are taken at the end of both expiration and inspiration.

The difference between the two measurements is the degree of expansion, and is usually greater than 2 centimeters, while decreased expansion may be observed in individuals with ankylosing spondylitis due to reduced chest wall mobility.

In the lumbar spine, range of motion is tested in the sagittal plane by the Schober test, and in the coronal plane by the extent of lateral spinal flexion.

The Schober test measures forward flexion of the lumbar spine. To do it, the individual has to stand straight up, and the examiner makes a mark approximately at the level of the fifth lumbar vertebra or L5. Then, two more points are marked, one 5 centimeters below and another one 10 centimeters above this point, for a total of 15 centimeters distance. The individual must then bend forward maximally without bending the knees and the distance is measured again.

In normal individuals, the difference between the two measurements should exceed 5 centimeters, with the total distance greater than 20 centimeters. If the distance of the two points doesn’t increase by at least 5 centimeters, this is a sign of restriction in the lumbar flexion.

In addition to physical exam maneuvers, an X-ray of the spine should be done.

In the early stages of ankylosing spondylitis there may be small erosions at the corners of the vertebral bodies, which become square-shaped.

Over time, long-standing inflammation causes complete ossification of the space between the vertebral borders, resulting in a bamboo spine due to fusion of the vertebrae.

These X-ray findings typically occur long after the inflammatory process started, so an MRI is better for detecting early signs of spinal inflammation.

In individuals with sacroiliitis seen on plain radiography, additional imaging, such as an MRI, is not necessary for diagnosis. However, if plain radiographs don’t reveal sacroiliitis, and when there’s still a high suspicion for ankylosing spondylitis, an MRI can be done to reveal inflammatory changes and more subtle structural abnormalities.

The next disease is psoriatic arthritis which specifically affects individuals with psoriasis.

Most of the time, psoriasis precedes the onset of arthritis by a few years, but occasionally both can develop together.

On rare occasions the arthritis can precede the skin rash, which means that some individuals develop psoriatic arthritis even without having psoriasis.

To further complicated things, having psoriasis and arthritis doesn’t always mean psoriatic arthritis, because individuals with psoriasis, can get other types of arthritis like rheumatoid arthritis, osteoarthritis, gout, reactive arthritis, and the arthritis of inflammatory bowel disease.

So psoriatic arthritis has to fit the classic pattern, and it has to occur in a person that typically has psoriatic skin changes like pitting or onycholysis, and scaly skin lesions.

There are five main patterns of psoriatic arthritis.

The most frequent presentation asymmetric oligoarticular arthritis, which doesn’t affect the same joints on both sides of the body and usually involves fewer than three joints.

Next is symmetric polyarticular arthritis, which affects five or more joints on both sides of the body simultaneously, mainly the hands and feet, similar to rheumatoid arthritis.

Then there’s the spondylitis presentation, characterized by stiffness of the neck or the sacroiliac joint of the spine.