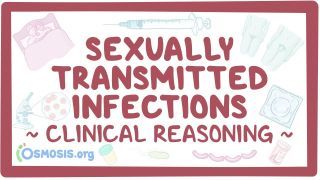 Some STIs primarily affect the genital organs- like gonorrhea and chlamydia, while others affect the whole body- like syphilis, HIV, and hepatitis B.

Generally, with STIs, all partners with whom there has been sexual contact in the 60 days prior to the diagnosis should be evaluated and treated.

These infections are usually asymptomatic, but in females, they can cause cervicitis and urethritis.

With urethritis, there can be symptoms that suggest a urinary tract infection, like dysuria and frequency.

If left untreated, these bacteria can ascend in the reproductive tract and cause pelvic inflammatory disease or PID- which is the inflammation of the uterus, fallopian tubes, the ovaries and of course, the cervix.

Sometimes, PID can be complicated by a tubo-ovarian abscess which can involve the fallopian tubes, ovaries, or other nearby pelvic organs.

Now, in males, these infections can cause urethritis or epididymitis.

With urethritis, there’s dysuria and penile discharge, and with epididymitis, there’s unilateral testicular pain and a hydrocele can form around the testicle.

In males and females, Chlamydia trachomatis and Neisseria gonorrhoeae can also cause conjunctivitis through direct inoculation with genital secretions.

The gold-standard for diagnosing these infections is the nucleic acid amplification testing or NAAT from secretions.

If NAAT is negative for Chlamydia trachomatis and Neisseria gonorrhoeae, then NAAT is performed for Mycoplasma genitalium which is another sexually transmitted infection.

In males, a Gram stain is performed on the urethral swab and is examined for the presence of white blood cells or WBCs and for bacteria.

The presence of more than 2 WBCs per high power field or HPF suggests urethritis.

In addition, the first-void urine should be checked and in urethritis, leukocyte esterase is positive on the dipstick test, and there are more than 10 WBC per HPF on microscopy.

Finally, HIV testing is also done for all individuals.

Neisseria gonorrhoeae can be treated with a single IM dose of 250 milligrams ceftriaxone, along with a single oral dose of 1 gram azithromycin- which covers chlamydial infections.

Azithromycin is given, because individuals with gonococcal infections often have chlamydial infections as well.

Chlamydia trachomatis can be treated with either a single oral dose of 1 gram azithromycin or oral doxycycline given in the dose of 100 milligrams, twice daily, for 7 days.

For individuals with epididymitis or proctitis, empirical treatment for both Chlamydia trachomatis and Neisseria gonorrhoeae infection is done with a single intramuscular dose of 250 milligrams ceftriaxone and oral doxycycline for 10 days- in the case of epididymitis, and for 7 to 21 days for proctitis depending on severity.

For Mycoplasma genitalium infection, treatment is a single oral dose of 1 gram azithromycin.

For severe PID treatment is 2 grams of IV cefoxitin or IV cefotetan given every 6 hours, along with 100 milligrams of oral doxycycline every 12 hours.

After 24 hours, parenteral therapy is usually switched to oral therapy with only doxycycline for 14 days.

In case there’s a tubo-ovarian abscess, 500 milligrams of oral metronidazole is given twice daily for 14 days.

For mild PID, treatment is a single dose of IM ceftriaxone and 100 milligrams of oral doxycycline twice daily for 14 days.

Okay, now moving on to Human papillomavirus infection or HPV infection and some serotypes - like 16, 18, 52 and 56- are associated with cancer.

Anogenital warts can be located on the vulva, penis, groin, perineum, perianal skin, and sometimes on the suprapubic skin.

The diagnosis is made based on the appearance of the warts. If there’s any uncertainty, the wart can be biopsied.

If the lesions persist, then surgical excision, electrosurgery, cryotherapy, or treatment with trichloroacetic acid can be done.

Next is Trichomonas vaginalis infection, which causes a protozoan infection called trichomoniasis.

In females, symptoms include a bad-smelling, purulent and thin vaginal discharge, along with burning and pruritus in the genital area.

Additionally, there can also be dysuria, frequency, lower abdominal pain, post-coital bleeding and dyspareunia- which is painful sexual intercourse.

In males, the infection is usually asymptomatic, but it can cause symptoms like urethral discharge and dysuria.

The gold-standard for identifying Trichomonas vaginalis is by performing NAAT on a vaginal or urethral swab.

Additionally, in females, microscopy of the vaginal secretion is done and this shows motile trichomonads.

Treatment is done with a single 2 gram oral dose of either tinidazole or metronidazole.

Next are infections that get transmitted through skin-on-skin contact, such as Pediculosis pubis infections- most commonly known as crabs- and Sarcoptes scabiei infections- which cause scabies. Both of these can infect the pubic area during sexual intercouse.

The main symptom with both infections is pruritus that can involve the genital and perianal areas.

With crabs, lice and nits- which are louse eggs- can be seen with the naked eye in the affected area.

With scabies, there are usually multiple small erythematous papules.

Crabs and scabies can be treated with topical permethrin that’s applied until there are no more lesions in the genital area.

In addition, a first-line treatment for scabies is a single 200mg dose of oral ivermectin, followed by a repeat dose in one to two weeks.

With crabs, the nits should be removed with a nit comb or tweezers.

Another example of genital infections transmitted through skin-on-skin contact is Herpes simplex virus - or HSV - infection.

There are two types of herpes simplex virus- type 1 and type 2 and both can cause genital herpes.

Now, the symptoms depend upon whether a person has anti-herpes simplex virus antibodies. If they don’t already have those antibodies, then it’s called a primary infection.

In a primary infection, there are painful vesicles that form on an erythematous base, pruritus in the genital area, dysuria, and inguinal lymphadenopathy.

Now, if the individual does have antibodies from a prior asymptomatic infection, then it’s called a nonprimary infection. In this case, symptoms are generally less severe.

Finally, HSV can linger in the neurons and can reactivate from time to time, and when that happens the symptoms are usually more mild.

Depending on the type of sexual intercourse, herpes simplex virus can also cause proctitis, which presents with tenesmus and anorectal pain.

Now, diagnosis of herpes simplex virus infection can be made with a viral culture or by doing a HSV polymerase chain reaction or HSV PCR.

Serology can also be done in order to identify anti-HSV antibodies which diagnoses a past or present HSV infection.

Treatment of recurrent HSV infections depends upon the frequency of recurrent episodes and severity of symptoms.

It’s thought that the microabrasions in the skin that can occur during sexual contact can create a path for Haemophilus ducreyi to infect the tissues, because this bacteria doesn’t typically infect intact skin.

The skin lesion starts as an erythematous papule that evolves into a painful ulcer that’s about 1 to 2 centimeters in diameter that bleeds when scraped. This is called a chancroid ulcer, and usually a few ulcers develop in the genital area.

In order to diagnose the infection, a gram stain, culture and PCR can be done using exudate from the ulcer. The gram stain can sometimes show gram-negative rods in a chain, also called “school of fish”.

Treatment is a single dose of 250 milligrams of IM ceftriaxone or 1 gram of oral azithromycin.

Syphilis is divided into early and late stages.

The early stage is further subdivided into primary syphilis and secondary syphilis.

The skin lesion starts as an erythematous papule that evolves into a pain-free ulcer that’s about 1 to 2 centimeters in diameter.

Usually a few chancre ulcers develop in the genital area.

In the absence of treatment, the chancre heals within 3 to 6 weeks, but bacteria will spread throughout the body and cause a systemic infection.

Within weeks to a few months after a chancre develops, secondary syphilis can occur, which is a systemic infection.

Most individuals with secondary syphilis have lymphadenopathy in the posterior cervical, axillary, inguinal, and femoral regions.

Often there’s a maculopapular rash that’s symmetrical and diffuse and involving the trunk and extremities.

There can also be gastrointestinal symptoms like right upper quadrant pain-which can be a sign of hepatitis.