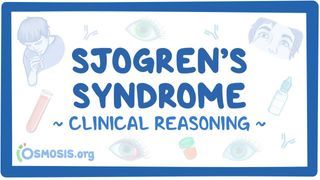 Sjogren's syndrome is a common autoimmune disorder, that mostly occurs in females, where the immune system attacks various exocrine glands, which are glands that pour their secretions into a duct.

Most commonly the salivary glands and the lacrimal or tear glands are affected.

If Sjogren syndrome is primary or occurs alone - it’s called sicca syndrome, and that’s associated with anti-SSA/RO and anti-SSB/LA antibodies.

Alternatively it can be secondary, which means that it is accompanied by other autoimmune diseases like lupus, rheumatoid arthritis, and scleroderma.

Lacrimal gland involvement leads to dryness of the eyes, blurry vision, itching, redness and burning and ultimately to keratoconjunctivitis, which is the inflammation and ulceration of the cornea and conjunctiva.

Salivary gland involvement leads to xerostomia, or dry mouth, difficulty in tasting and swallowing, cracks and fissures in the mouth, and eventually tooth decay.

In the nose and airways, it causes ulceration and bleeding, and if this affects the larynx, it can lead to difficulty speaking.

In some people there may be dryness of the skin and vagina.

Finally the salivary and lacrimal glands can swell up and compress nearby structures like nerves, causing pain.

In addition, Sjögren's syndrome can also affect organs beyond the exocrine glands as well, and sometimes it can overlap into another autoimmune disorder.

There can be vascular conditions like palpable purpura, due to bleeding within the skin.

These purpura can develop into large ulcers that can get infected.

Another vascular condition is Raynaud’s phenomenon, which is where arterial spasm reduce the blood flow to the fingers for a few minutes at a time.

Lung problems include a chronic cough, as well as interstitial lung disease.

Renal involvement can cause interstitial nephritis and defects in tubular function, causing creatinine levels to rise.

More rarely, it can cause glomerulonephritis, leading to hematuria and proteinuria.

Hematologic manifestations in Sjogren’s include mild anemia and leukopenia; as well as hypergammaglobulinemia; monoclonal gammopathies, cryoglobulinemia, and lymphoma.

Finally, some individuals with Sjogren’s may develop autoimmune thyroiditis.

Since virtually any organ or gland can be affected, there is a wide variety of diagnostic tests that can be done.

Starting from the eyes, there are three commonly used tests for dry eye.

First, is the Schirmer test, which measures reflex tear production.

A folded test strip of sterile filter paper, supplied in a standard kit, is placed over the margin of each lower eyelid at the junction of the middle and lateral thirds. The extent of wetting is measured over five minutes: wetting of less than 5 millimeters suggests aqueous tear deficiency.

Second, is ocular surface staining. That’s where dyes like rose bengal, fluorescein, or lissamine green, are used to stain areas of damaged tissue. The ocular surface is then examined with a slit lamp to assess the damage to the conjunctiva and cornea.

Now, when we blink, a film of tears spreads over the eye, making the surface of the eye smooth and clear. Without this tear film, good vision would not be possible.

The tear break-up time is how long it takes for a dry spot to appear within this tear film - disrupting it.

Next up, are tests that help identify salivary gland hypofunction.

First, there’s quantitative salivary gland scintigraphy, also called technetium excretion radionuclide scanning, which shows how the major salivary glands are functioning based on their uptake of a radionuclide.