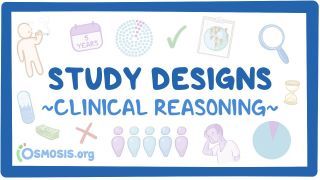 There are six basic types of epidemiological study designs, and they can each be distinguished using certain criteria.

The first criterion for deciding which study design to use is whether you have individual or group data.

For example, let’s say we want to know how many people out of 100 people had migraines in the past year.

Now, with individual data, we have information about each person, so we can tell whether or not each of the 100 people had a migraine.

On the other hand, if we have group data, we don’t actually know which specific individuals out of the 100 people had migraines.

So even though we know that 9 people had them, we don’t know which 9 people they were or any of their individual characteristics.

Now, ecological studies are a type of study design that uses group data to figure out if there is a potential association between two variables.

For example, let’s say you want to figure out if people who sleep less are more likely to get migraines.

And perhaps you have information about average sleep duration for populations in ten different cities.

You could plot this information on a graph with average sleep duration on the x-axis and the prevalence of migraines—which is the number of people that suffer from migraines, per 100,000 people—on the y-axis.

Generally, we can see that the less sleep a city gets, the higher the prevalence of migraines is for that city.

The thing is, we can’t actually say that getting less sleep causes migraines, since we don’t have information about each individual in each city.

All we can say is that there’s an association between sleep duration and prevalence of migraines.

Ecological studies are helpful for making hypotheses, though, that can later be tested using individual-level studies.

And, in general, individual-level studies are considered stronger than ecological studies, because knowing individual characteristics can help us determine what risk factors are associated with certain diseases.

So now let’s talk about studies that use individual data.

The next criterion we use to decide on a study design is whether or not there’s an intervention, and an intervention is basically just an exposure that the researcher controls.

So, for example, let’s say we want to find out if a newly discovered drug, we’ll call it Drug A, can prevent migraines for up to a year. In this example, Drug A is the intervention and having a migraine is the outcome.

After both groups get their treatments, researchers would compare the incidence of migraines in each group—which is the number of individuals in each group who got migraines over the next year.

Now, RCTs are considered to be the gold standard study design because they’re able to determine causality.

In other words, we can determine if taking Drug A causes people to have fewer migraines compared to taking the placebo.

Determining causality is possible because the intervention group and the control group are randomly selected from the larger target population, so there’s a good chance that people in each group are similar and that the only difference between the two groups is whether or not they were exposed to Drug A.

There are some downsides to RCTs though, mainly that they can sometimes be really expensive, time consuming, and in some cases unethical, depending on the intervention.

Next, let’s talk about studies that don’t have an intervention, and these are called observational studies, because you simply observe what happens to individuals without controlling their exposure.

There are a few different types of observational studies, and the main criterion used to distinguish them is when you measure the exposure.

The first observational study is cohort or longitudinal studies, and cohort studies measure the exposure before the outcome.

Now, a cohort is simply a group of people who share a common characteristic.

Cohort studies are useful when you want to show the timing or temporality of the relationship between the exposure and the outcome.

For example, out of 200 people, 100 that smoke and 100 that don’t smoke, none of them have migraines at the beginning of the study.

Cohort studies are also good for looking at rare exposures, like if a certain uncommon medication causes an increased risk of migraines.

A third reason you’d use cohort studies is to look at multiple outcomes from one specific exposure.