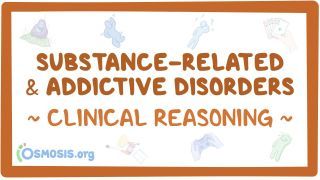 People use substances or recreational drugs for various reasons. Initially it’s usually for fun or curiosity or to treat pain, but over time people can become reliant on them and it can lead to a substance-related and addictive disorders.

Addictive disorders are uniquely challenging to treat because they’re medical conditions that cause social support networks to fall apart.

In addition, an individual craves and seeks out substances, despite facing harmful consequences.

The addictive potential from substances come from their effect on the brain's reward system and their ability to affect emotion, mood, and perception.

They typically cause a dramatic increase in dopamine levels, which results in euphoria or a so-called “high.”

Substance-related and addictive disorders are linked to biological factors - which is why individuals with a family history of substance use are at higher risk.

There are also psychological factors, like using substances to self-medicate for mental health problems like PTSD and depression.

Finally, there are environmental factors like neglect and abuse that put individuals at higher risk.

So substance-related and addictive disorders includes substance use disorders and substance-induced disorders which comprise three conditions: intoxication, withdrawal, and other substance or medication-induced mental disorders.

There are 10 classes of drugs that can lead to substance-related disorders, each with its own particular presentation: alcohol; opioids; stimulants which includes amphetamine-type substances and cocaine; cannabis; caffeine; hallucinogens - which includes phencyclidine (PCP) as well as other hallucinogens; inhalants; one category for sedatives, hypnotics, and anxiolytics; tobacco; and a category for other substances.

Caffeine can only lead to intoxication and withdrawal, but not substance use disorder.

The conditions due to one substance are not mutually exclusive, as most of the ten substance classes can lead to its own specific substance use disorder and/or any of the three substance-induced disorders.

Now in addition to all of these, there’s also gambling disorder, which is the only behavioral addiction in DSM-5.

Gambling games activate similar reward systems as substances. Interestingly, in June 2018, the World Health Organization included video game addiction as one additional category, but this is not present in DSM-5.

The diagnosis of substance use disorder is based on a history of chronic substance use leading to significant impairment or distress over the past 12-month period, with at least two of the following criteria that are organized into four groups.

Let’s go through the criteria. First, individuals take an addictive substance in larger amounts or for longer than originally intended.

Second, they try to cut down substance use and have made unsuccessful attempts to do so.

Third, they spend a lot of time trying to obtain the substance, use it, or recover from its effects.

Fourth, they have intense desires for the drug at any time of the day.

Fifth, the substance use affects their performance at work, school, or in the home.

Sixth, the individual continues using substances despite social problems due to the substance.

Seventh, they give up work or recreational activities due to substance use.

Eight, they use substances in physically hazardous situations.

Ninth, they continue using substances despite having health issues due to the substance.

Tenth, they develop tolerance, meaning they need increased doses to get a desired effect or, put differently, the normal dose has a decreased effect.

Eleventh, they have withdrawal, meaning they feel physiologic symptoms when there’s less of the substance in their body.

Withdrawal symptoms vary across drug classes and it is usually, but not always, associated with a substance use disorder.

Those who have two or three criteria are considered to have a “mild” substance use disorder.

As an example, for alcohol use disorder, someone might drink every day, in large amounts – which is the first criterion.

Also, that person might crave alcohol intensely – the fourth criterion, which forces him or her to keep drinking right before driving home and despite having cirrhosis, which meets criteria eight and nine. Because the individual has four criteria, they meet the definition of moderate alcohol use disorder.

So next, are the substance-induced disorders which includes intoxication, withdrawal, and other substance or medication-induced mental disorders.

For intoxication, the use of the substance has to cause psychobehavioral and cognitive changes in a person that affects their performance at work, school, or in the home.

With withdrawal, stopping or reducing the amount of the substance has to cause psychobehavioral and cognitive changes that cause distress and affects their performance at work, school, or in the home.

Lastly, substance or medication-induced mental disorders, include types of psychotic disorders, as well as bipolar and depressive disorders.

Here, the symptoms should begin within one month of substance intoxication or withdrawal, and should not persist for more than one month after the substance use has stopped.

The most commonly used substances are alcohol, opioids, and stimulants, so we’ll go through some common intoxication and withdrawal syndromes.

In alcohol intoxication, there’s at least one of the following six physiologic changes: slurred speech; incoordination; unsteady gait; nystagmus, which is involuntary eye movement; impairment in attention or memory; and stupor or coma.

Alcohol blood levels can vary and aren’t a basis for the diagnostic criteria, but they can be a marker for the severity of the intoxication.

In intoxication, when the blood alcohol level reaches around 60 mg/dL symptoms often include increased talkativeness, a sensation of well-being, and a bright, expansive mood.

When the alcohol blood level is greater than 150 mg/dL, there’s usually ataxia which is the lack of voluntary coordination of muscle movements, but also speech issues, nausea and vomiting.

In mild withdrawal there’s mild tremors, vomiting, anxiety, tachycardia, and insomnia that begins around 6 hours after the last drink, and symptoms resolve by day two.

In severe withdrawal there’s severe tremors, vomiting, disorientation, severe agitation and disorientation, sweating, hypertension, and even visual hallucinations that begins 48 to 96 hours after the last drink.

A worrisome complication of severe withdrawal is delirium tremens, which is when a person has a complete hallucination without any recognition of the real world, along with extreme autonomic hyperactivity.

Delirium tremens typically happens when a person has a long history of alcohol abuse and then abruptly stops.

Next, there’s opioid intoxication which causes pupillary constriction or pinpoint pupils which is due to brain injury following respiratory depression, and at least one of the following three physiologic changes: drowsiness or coma; slurred speech; and impaired attention or memory.

Third, there are psychobehavioral changes like initial euphoria followed by apathy; dysphoria; psychomotor agitation or retardation; and impaired judgment.

In opioid withdrawal, individuals have either stopped or reduced opioid use, or have used an opioid antagonist after extended opioid use, since both scenarios lead to a sudden drop in opioid blood levels.

Second, the individual presents psychobehavioral changes such as euphoria or affective blunting; changes in sociability; hypervigilance; anxiety; and tension or anger.

In stimulant withdrawal individuals have at least two of the following five symptoms after stopping use: fatigue; vivid nightmares; insomnia or hypersomnia; increased appetite; and psychomotor retardation or agitation.

It’s characterized by recurrent problematic and distress-causing gambling behavior as shown by at least four of the following nine behaviors, all occurring within a 12-month period.

First, the individuals feel the need to gamble, and with each game, they need to win increasing amounts of money to achieve the desired excitement.

Second, they are restless or irritable when trying to stop gambling.

Third, they make unsuccessful efforts to control, cut back, or stop this behavior.

Fourth, individuals are preoccupied with gambling, usually thinking about past successful experiences or of ways to make money from gambling.

Sixth, after losing money gambling, they often return to get even.

Seventh, people lie about being involved in gambling.

Eighth, they jeopardize or lose a significant relationship, job, or educational or career opportunity because of gambling.