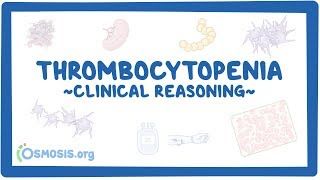 Say you get one of those annoyingly painful paper cuts, which damages your blood vessel endothelium, causing you to bleed. Normally, the first responders to endothelial damage are platelets, which quickly plug the site of injury - that’s primary hemostasis.

Now, a low number of those first responder platelets is thrombocytopenia, and it’s defined as a platelet count below 150,000 cells per microliter, with the normal range being between 150,000 and 450,000.

Generally, the lower the platelet count, the higher the risk of bleeding or bruising.

Low platelets cause mucocutaneous bleeding, which includes petechiae - which are pinpoint superficial skin bleeds, anterior epistaxis - which are usually mild nosebleeds, immediate bleeding after surgical procedures, like tooth extraction, or bleeding from mucocutaneous surfaces, like gingival, gastrointestinal, or vaginal bleeding.

One quick thing to look for is hemodilution and it happens when the platelet concentration falls as a result of large volume transfusions of platelet-free products, like packed red blood cells or intravenous fluids. This can happen in trauma patients who lose a lot of blood.

Another thing to keep in mind is pseudothrombocytopenia - meaning that it’s a lab error.

When a blood sample is collected from a patient, an anticoagulant called ethylene-diamine-tetraacetic acid, or EDTA is often added to prevent the blood from clotting.

But the platelets of some people clump together when they see EDTA, and large clumps of platelets get misread by the cell counting machine as only one platelet, creating the false illusion of thrombocytopenia.

A peripheral blood smear can help resolve this, because it will show the platelet clumps.

When that happens a different anticoagulant like citrate or heparin can be used, and if the clumps disappear, then pseudothrombocytopenia is confirmed.

Now, if there really seems to be a decrease in platelets then broadly speaking it can be due to decreased platelet production, splenic sequestration of platelets, or increased platelet destruction.

Let’s start with decreased platelet production which is often due to bone marrow suppression - and that causes thrombocytopenia, as well as anemia and leukopenia, collectively called pancytopenia.

Typically the reticulocyte count is also decreased, down to less than 1%.

Patients usually have mucocutaneous bleeding from thrombocytopenia, fatigue from anemia, and frequent infections from leukopenia.

And there are many causes of pancytopenia each with different features.

For example, in aplastic anemia, the anemia is normocytic and normochromic, and a bone marrow biopsy shows excess fat and hypocellularity.

Another cause is vitamin B12 and folate deficiency, but here the anemia is macrocytic, and a peripheral blood smear shows macro-ovalocytes, which are large oval-shaped red blood cells, and hypersegmented neutrophils, which are neutrophils with six or more lobes.

Another cause is myelofibrosis which shows a peripheral blood smear with teardrop shaped cells and a bone marrow biopsy with collagen deposition.

Myelodysplastic syndrome, a stem-cell disorder that can lead to leukemia in the elderly can also present with pancytopenia.

Yet another cause is leukemia, which often results in blast cells in the blood and bone marrow.

Some treatments and medications can also cause pancytopenia like radiation, chemotherapy, the antimalarial quinine, and various antibiotics like linezolid.

Next up is thrombocytopenia due to splenic sequestration of platelets.

Normally, the spleen allows about one-third of all platelets to chill within it, while the other two-thirds circulate in the blood. In liver cirrhosis, portal hypertension causes blood to back up into the spleen, causing congestive splenomegaly.

The spleen physically enlarges, but also starts to hyperfunction - and when it does that it’s called hypersplenism.

In hypersplenism, the spleen generously allows up to 90 percent of the total platelets in, which means that nearly none are left in the blood.

To worsen the problem, the cirrhotic liver can’t produce thrombopoietin, which is the hormone that stimulates platelet production. And the liver isn’t making coagulation factors which leaves patients at risk for bleeding.

An enlarged spleen can be detected on physical exam or with an abdominal ultrasound.

Next up are thrombocytopenias caused by increased platelet destruction.

Some are non-immune mediated, like thrombotic thrombocytopenic purpura or TTP, hemolytic-uremic syndrome, or HUS, and disseminated intravascular coagulation, or DIC.

Thrombocytopenia from these cases are due to a consumption of platelets during the formation of abnormal clots. And as a result, there are fewer platelets left in circulation.

In TTP, there can be a genetic deficiency of ADAMTS-13, or an autoantibody against ADAMTS-13.

Sometimes autoantibodies to ADAMTS-13 develop after exposure to antiplatelet medications like ticlopidine and clopidogrel, or chemotherapeutic agents like cyclosporine and gemcitabine. Alternatively, they can be associated with diseases like systemic lupus erythematosus.

Patients classically develop five symptoms: Thrombocytopenia, microangiopathic hemolytic anemia - which occurs due to destruction of the red blood cells by the large clots, and causes fatigue; fever, renal insufficiency, which can cause hematuria and decreased urine output; and neurologic symptoms like headache and confusion.

Only some patients get all five symptoms, but thrombocytopenia and MAHA have to be present to diagnose TTP.

A CBC will show thrombocytopenia and normocytic normochromic anemia, and a peripheral blood smear will show schistocytes, which are fragmented red blood cells.

Because there’s a hemolytic anemia, the unconjugated bilirubin and lactate dehydrogenase levels are elevated.

In addition, haptoglobin levels are decreased, because haptoglobin binds to free hemoglobin in the circulation.

Also, since the hemolysis is not immune mediated, a Coombs test is often negative.

Creatinine levels may be elevated if there is kidney damage.

Markers of secondary hemostasis like prothrombin time or PT, and partial thromboplastin time or PTT are normal, because they’re not involved in formation of the von willebrand factor multimers and platelets.

TTP is a medical emergency, and should be promptly treated with plasma exchange, which gets rid of the patient’s plasma along with all of the large von willebrand factor multimers, and replaces it with new plasma.

In addition, corticosteroids like prednisone may also be added.

Now, although TTP patients are thrombocytopenic, platelet transfusion is absolutely contraindicated, because providing the von willebrand factor multimers with even more platelets will only worsen clot formation.

Platelets are only transfused in rare settings when the patient has a life-threatening bleed, and the benefits are thought to outweigh the risks.

Alright, now HUS is clinically similar to TTP, and there are two types of HUS; typical or shiga-toxin producing Escherichia coli or SPEC-HUS, and atypical HUS.

Typical HUS classically occurs in children and develops after an episode of gastroenteritis caused by enterohemorrhagic Escherichia coli subtype 0157:H7, which produces a shiga-toxin.

It then enters the circulation, where it damages the endothelial cells causing massive release of von willebrand factor. This leads to excessive platelet adhesion, and clot formation throughout the body.