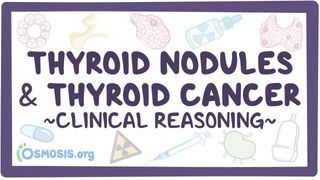 Thyroid nodules are lumps on the thyroid gland that represent clusters of abnormally growing thyroid cells. They’re actually fairly common, and they’re often felt on palpation, or they’re discovered incidentally, like during an ultrasound of the thyroid gland.

There may be a single nodule or multiple nodules, and sometimes they form on a pre-existing goiter - which is when the thyroid is enlarged, usually due to an autoimmune attack on the thyroid gland, like with Hashimoto’s thyroiditis, or Graves’ disease.

The key thing to identify is whether or not the nodule is benign or is a thyroid cancer.

The thyroid is sensitive to radiation, so an important risk factor for thyroid cancer is prior radiation in the head or neck region, which might have been given for another malignancy in the area, like lymphoma.

Other risk factors for thyroid cancer include a family history of thyroid cancer or being over age 65, since nodules are more likely to be malignant in older individuals.

Because thyroid nodules are fairly uncommon in young individuals, if they appear in a person below 20 years of age, they’re usually cancerous.

Finally, having symptoms related to the nodule like voice changes or a hoarse voice, and difficulty breathing or swallowing suggest that the nodule is an invading adjacent tissues and structures, a sign of thyroid cancer.

On a physical examination, a nodule is more likely to be thyroid cancer if it’s firm and hard on palpation, or if it’s fixed - meaning, it doesn’t move when the individual swallows.

Another warning sign is the presence of a swollen lymph node in the neck region, especially when the lymph node doesn’t hurt on palpation, and is only on one side.

The next step in evaluating the risk that a thyroid nodule is cancerous, is getting a TSH level and a thyroid ultrasound. Depending on the results of these tests, a fine needle aspiration may or may not be needed.

Functional nodules are further evaluated with a radioactive iodine uptake scan - or RAIU for short.

In an RAIU scan, the person is given either a capsule or a liquid that contains the radioactive isotope of Iodine, typically Iodine-123.

Functional thyroid tissue loves Iodine, and gobbles it up it to make thyroid hormones.

So to see how much thyroid tissue is actively making hormones we perform a scintigraphic scan.

The principle is simple - the more active the thyroid is, the more iodine it takes in, and, as a result, the more radiation it emits.

Then a gamma camera is used to pick up the emitted radioactive signal, and a computer translates this into pictures with a white background, where the dark areas representing radiation emitted by the functional thyroid tissue. A set of these scans is obtained 4 to 6 hours later, and then another set is obtained 24 hours later.

A normal thyroid gland looks like two grey wings on a RAIU scan, and if functional nodules are present, they appear darker than the rest of the thyroid.

If only one nodule is present, the diagnosis is toxic adenoma, and if there’s more than one nodule, we call that toxic multinodular goiter - because many nodules typically form on a preexisting goiter.

These two conditions are usually treated with radioiodine therapy. The way it works is a person swallows a capsule containing a small dose of Iodine-131-which emits radiation - which is different from the iodine 123 that’s used in the RAIU scan. Functional thyroid tissue takes in this iodine just the same, though, and the iodine destroys it with radiation - like a Trojan horse.

The person may go home after swallowing the capsule, but shouldn’t have prolonged close contact with pregnant women and young children for three days, and should drink plenty of fluids - so that the iodine is rapidly flushed out of their system.

Now let’s switch gears and look at non-functional nodules which are associated with a normal or high TSH, and a normal thyroid hormone level.

These nodules are more likely to represent thyroid cancer, so here’s where ultrasonography comes in handy. On an ultrasound, the normal thyroid gland is medium in terms of echogenicity, so it looks like a light grey butterfly with its wings on either side of the trachea.

Normally, the thyroid gland is homogeneous, but nodules are like glitches in that neat homogeneous medium.

Ultrasound can also pick up deep nodules, that can’t be felt on palpation, and give a sense for their size, shape, margins, composition, which can be solid, cystic or mixed, and echogenicity - meaning, if they hypoechoic or hyperechoic.

Ultrasonography can also see if there are calcifications inside the nodules.

Taking all of this into consideration, ultrasonography can classify nodules as high, intermediate, low, and very low risk.

High risk nodules are solid and hypoechoic, meaning they’re darker than the thyroid gland, and have worrying features, like irregular margins, microcalcifications - which appear as white spots, and extension beyond the thyroid.