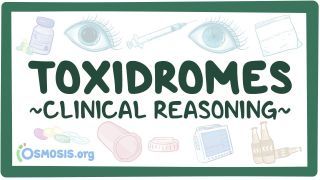 Accidental and intentional intoxications or drug overdoses produce toxidromes, which are a combination of symptoms and characteristic findings for a particular substance or class of substances.

Sometimes there’s more than one substance that’s used, so there are a combination of findings.

The general goals of management include stabilizing the clinical condition and controlling the symptoms, as well as finding the causing substance and give specific treatment.

Individuals who present only mild toxicity can be observed in the emergency department until they are asymptomatic, while those with significant toxicity should be admitted to an intensive care unit or ICU.

The initial step in evaluating a person who may have a toxidrome is to assess the A, B, C’s - airway, breathing and circulation.

In individuals with severe respiratory distress, intubation and mechanical ventilation may be needed right away.

Next, an electrocardiogram is done along with continuous cardiac monitoring to assess for cardiac arrhythmias.

If the individual is hypotensive, then 2 liters of IV isotonic crystalloid solution is given, followed by a norepinephrine drip.

Next, if the individual has neurological symptoms- like confusion or delirium, then IV thiamine is given to prevent Wernicke’s encephalopathy. That’s usually caused by vitamin B1 deficiency, which is often due to ethanol abuse and can cause the triad of nystagmus, ataxia, and confusion.

Finally, it’s important to assess the person’s vital signs, pupil size- because some toxidromes cause either mydriasis or miosis, check for dry skin like in an anticholinergic toxidrome, and level of consciousness.

Initial lab testing includes a finger-stick glucose- to quickly look for hypoglycemia, as well as acetaminophen and salicylate levels- which are common intoxications, and a pregnancy test for females between age 18 and 45.

A CBC is also done, along with BUN and serum creatinine levels- to assess renal function and electrolytes to check for electrolyte imbalance- like hyperkalemia with digoxin intoxication.

Additionally, an ABG is done to see if the intoxication is associated with a high-gap metabolic acidosis, which is consistent with salicylates, methanol and ethylene- glycol intoxications.

If results show a high-gap metabolic acidosis, then levels of methanol and ethylene-glycol are checked.

If the individual has a history of alcohol consumption, then serum ethanol levels are checked.

If the individual is taking digoxin, serum levels of digoxin are checked as well.

Urine drug testing is done and that typically checks for substances like amphetamines, methamphetamines, benzodiazepines, barbiturates, cocaine and opioids such as methadone.

With amphetamines, once the toxidrome has been identified, treatment shouldn't be delayed until the results of the urine drug test come.

Common hallucinogens- like phencyclidine, LSD or Ecstasy aren’t detected by standard drugs-of-abuse screens, so the diagnosis is made clinically.

Both cocaine and amphetamines can be ingested, smoked, snorted or taken intravenously.

With cocaine, effects appear immediately when taken intravenously, within 5 minutes when smoked, and within about 30 minutes when snorted.

With amphetamines, effects appear immediately when taken intravenously or smoked and within 5 minutes when snorted or ingested.

There are also psychobehavioral changes such as euphoria or reduced affect display; changes in sociability; hypervigilance; anxiety; and tension or anger.

Additionally, cocaine intoxication can cause cocaine-related chest pain which can be due to either arterial vasoconstriction- caused by excessive sympathetic nervous system activation or the formation of a thrombus- that happens because cocaine stimulates platelet aggregability- and that can lead to a myocardial infarction.

For both cocaine and amphetamine intoxication there’s no specific antidote, so supportive treatment is given as the body slowly metabolizes the drug.

For example, to control psychomotor agitation, 10 milligrams of IV diazepam is given and the dose can be repeated every 5 minutes.

With amphetamine intoxication, if diazepam doesn’t control the agitation, then intramuscular atypical antipsychotic medications, such as ziprasidone or intramuscular butyrophenones, such as haloperidol are given.

Next is the anticholinergic toxidrome which is for atropine, scopolamine, antihistamines such as loratadine, and tricyclic antidepressants such as amitriptyline. All of these drugs are ingested.

Physiological changes include mydriasis, tachycardia, hypertension and tachypnea. Additionally, the skin and the mucous membranes are dry, bowel sounds are decreased and there may also be urinary retention, myoclonus- which are jerky contractions of a group of muscles and choreoathetosis- which is a combination of chorea- or irregular migrating contractions and athetosis- or twisting and writhing.

There are also psychobehavioral changes, such as agitation, delirium and hallucinations.

Now, to better remember the anticholinergic toxidrome, we can use the following memory trick: red as a beet for cutaneous vasodilation, dry as a bone for anhidrosis, hot as a hare for hyperthermia, blind as a bat for nonreactive mydriasis, mad as a hatter for hallucinations and delirium and finally full as a flask for urinary retention.

No additional lab testing is necessary, but the ECG should be closely monitored, since it can show prolonged QRS duration and arrhythmias- such as sinus tachycardia caused by tricyclic antidepressants intoxication.

Treatment of the anticholinergic toxidrome relies on supportive care, such as giving IV diazepam for neurological symptoms.

The antidote for the anticholinergic toxidrome is IV physostigmine, which is an acetylcholinesterase inhibitor that counteracts the effects of anticholinergic drugs by not allowing acetylcholine to get degraded. This is given if the individual presents with both peripheral and central anticholinergic toxicity- like anhidrosis from peripheral toxicity and delirium from central toxicity. 0.5 to 2 milligrams of IV physostigmine are given over 5 minutes and the dose can be repeated in 30 minutes if delirium recurs.

Next, there’s the hallucinogenic toxidrome that’s specific for phencyclidine, LSD and designer amphetamines, such as MDMA or Ecstasy. These are usually ingested.

There are also neuropsychiatric symptoms, such as hallucinations, perceptual distortions, depersonalizations, agitations and synesthesia- or blending of the senses, like “seeing sounds” and “hearing colors”. Additionally, there can also be dysphoria- which is when the individual is completely dissatisfied with their life, fear, panic reactions and an overwhelming sense of dread.

Since none of these substances have an antidote, treatment relies on placing the individual in a calm and quiet environment until the symptoms disappear.

In individuals with severe agitation and dysphoria, 1 to 2 milligrams of IV Midazolam are given and the dose is repeated every 3 to 5 minutes until symptoms are controlled. If Midazolam isn’t effective in controlling the symptoms, then 2 to 5 milligrams of IV haloperidol are given.

The opioid toxidrome is specific for opioids, such as morphine, heroin and methadone. All of these are usually snorted, inhaled or taken intravenously, but can also be ingested, in which case the symptoms aren’t that severe.

Physiological changes include miosis and at least one of the following three: drowsiness or coma, slurred speech and impaired attention or memory. Additionally, there are also signs of central nervous system depression, such as respiratory depression and bradycardia.

Psychobehavioral changes include euphoria followed by apathy; dysphoria; psychomotor agitation or retardation; and impaired judgment. Sometimes, the individual can develop pulmonary edema, which causes dyspnea, in which case a chest x-ray is done.

Treatment relies on giving Naloxone, which is an antidote to opioid overdose. Naloxone is effective when delivered by intravenous, intramuscular, subcutaneous, and intranasal routes of administration.

The sedative hypnotic toxidrome is specific for benzodiazepines like diazepam, and alcohols, like ethanol, methanol, and ethylene-glycol.

With ethanol intoxication, there’s at least one of the following six physiologic changes: slurred speech; incoordination; unsteady gait; nystagmus, which is involuntary eye movement; impairment in attention or memory; and stupor or coma.

Ethanol blood levels can vary and aren’t a basis for the diagnostic criteria, but they can be a marker for the severity of the intoxication.

When the ethanol blood level reaches around 60 mg/dL symptoms often include talkativeness, a sensation of well-being, and a bright, expansive mood.

When the ethanol blood level is greater than 150 mg/dL, there’s usually ataxia which is the lack of voluntary coordination of muscle movements, but also speech issues, nausea and vomiting.

With methanol intoxication, there’s an afferent pupillary defect seen on the eye examination- meaning that the pupils don’t constrict enough when a bright light is swung from the unaffected eye to the affected one. In addition, on the eye examination using the ophthalmoscope, there may be mydriasis and hyperemia of the optic disk.

With ethylene glycol intoxication, there may be cranial nerves palsies and tetany- that’s because a toxic byproduct of ethylene glycol-called oxalate- leads to hypocalcemia.

Treatment of benzodiazepines intoxication relies on giving the antidote, which is Flumazenil- that’s an antagonist of the benzodiazepine receptor in individuals that overdosed or individuals that had procedures that needed sedation and developed symptoms of intoxication. 0.2 milligrams of IV Flumazenil are given over 30 seconds, followed by repeated doses of 0.2 milligrams to a maximum dose of 1 milligram.

Now, Flumazenil isn’t as effective in individuals that chronically take benzodiazepines, because it can precipitate seizures. In this case, treatment relies on supportive care, such as giving IV saline solutions for hypotension.

Regarding alcohols, there’s no antidote for ethanol intoxication, so treatment is supportive and IV saline solutions are often used to correct hypovolemia.

Some individuals can be agitated, violent, and uncooperative, so benzodiazepines and first generation antipsychotics such as haloperidol can be used if an individual requires sedation.

For example, a short course of long-acting benzodiazepines like diazepam 20 milligrams a day may be used.

For methanol and ethylene-glycol intoxications, the antidote Fomepizole is given. 15 milligrams per kilogram of IV Fomepizole are given initially, followed by 10 milligrams per kilogram every 12 hours and treatment is continued until serum methanol levels are under 6.2 millimoles per liter or ethylene-glycol levels are under 3.2 millimoles per liter.

If fomepizole is not available, then ethanol is used instead.

Hemodialysis is started right away in individuals with confirmed methanol or ethylene glycol poisoning with high anion gap metabolic acidosis or if there’s any evidence of organ damage, such as visual changes and renal failure.

Until hemodialysis is done, if the pH is lower than 7.3, then IV sodium bicarbonate is administered.

The cholinergic toxidrome is specific for organophosphates and carbamate insecticides. Toxicity happens as a result of cutaneous exposure, inhalation or ingestion and the clinical manifestations are similar regardless of the route of entry.

Physiological changes include miosis and muscarinic signs- due to the overstimulation of muscarinic receptors by the excess acetylcholine. These include salivation, lacrimation, urination, defecation, gastric emesis, bronchorrhea, bronchospasm and bradycardia- which can be easily remembered using the mnemonic SLUDGE/BBB.