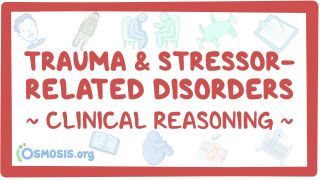 Transcript for Trauma and stressor-related disorders

Everyone experiences trauma at some point in their lives, and most of the time, with support from loved ones - people are able to recover.

But in individuals with trauma and stressor-related disorders like post-traumatic stress disorder, these experiences lead to symptoms like flashbacks and nightmares, hypervigilance, and aggressiveness - all of which can profoundly impact their life in a negative way.

Trauma and stressor-related disorders are thought to be caused by a combination of genetics, biological factors, and environmental factors.

The genetic link is based on the fact that those with a family history of mental issues tend to develop the disorders more frequently.

Biological factors include high levels of stress hormones like adrenaline and cortisol, even in the absence of stressful situations.

Environmental factors include things like family neglect in early childhood or jobs with high trauma exposure like being a fire-fighter or soldier. That’s because repeated trauma increases the risk of trauma and stressor-related conditions.

Trauma can be thought of as an overwhelming amount of stress that exceeds one’s ability to cope or process the emotions involved with that experience.

A traumatic event can involve one or repeated experiences over time.

For example, the experiences include things like serious road accidents, poverty, neglect in early childhood, military combat, and sexual abuse.

Psychological distress following a traumatic event most commonly causes anhedonia or lost interest in activities that were once enjoyable and a decreased ability to feel pleasure, dysphoria or a profound state of unease or dissatisfaction, externalized anger or aggression, and dissociative symptoms such as detachment from reality or self.

Most individuals develop depression, anxiety, and have problems with substance abuse which is often a way to self-medicate symptoms.

For diagnosis, the symptoms should cause distress and prevent individuals from functioning properly in all areas of life, including at school, work, and in social situations.

In PTSD, the symptoms all relate back to the traumatic experience.

First, individuals must’ve either directly experienced a traumatic event; witnessed it in person as it happened to others; only heard about it, but it involved a close family member or friend; or they must’ve experienced repeated or extreme exposure to graphic details of traumatic events such as police officers or paramedics.

Second, individuals should present one or more of the following five intrusions symptoms: recurrent, involuntary, and intrusive memories of the experience, nightmares, dissociative reactions like flashbacks where individuals relive the event, intense psychological distress when exposed mental or physical reminders, and psychological reactions like sweating and heart palpitations when exposed to trauma-related reminders.

Fourth, individuals should experience negative alterations in thinking and mood associated with the event.

The alterations should be evidenced by two or more of the following seven symptoms: inability to remember important aspects of the event due to dissociative amnesia; exaggerated negative beliefs about oneself, others, or the world, like thinking the world is completely dangerous and no one can be trusted; distorted thoughts about the cause or consequences of the trauma which leads to individuals blaming themselves or others; persistent negative emotions such as fear, horror, or shame; diminished interest in daily activities; feelings of detachment or estrangement from others; and anhedonia.

Lastly, individuals must present with alterations in wakefulness and reactivity, as evidenced by two or more of the following six features: irritable mood and angry outbursts without provocation, hypervigilance, recklessness or self-destructiveness, individuals get easily startled, impaired concentration, and sleep disturbances.

The symptoms must last for more than 1 month, and other medical conditions that can cause them should be ruled out.

Acute stress disorder causes many of the same trauma-related symptoms as PTSD, but a key difference is that the symptoms last at least 3 days and up to 1 month following exposure.

Like PTSD, individuals must’ve either directly experienced a traumatic event, witnessed it in person as it happened to others, only heard about it but it involved a close family member or friend, or they must’ve experienced repeated or extreme exposure to graphic details of traumatic events.

Second, at least nine symptoms from the five main symptom categories need to be present at the same time.

Third, there are adjustment disorders which are a group of disorders marked by maladaptive emotional or behavioral symptoms that develop in response to a stressor.

For example, some individuals might be rebellious or anxious, while others might be feeling sad, hopeless, or powerless after a divorce.

First, for diagnosis, the symptoms should appear within three months after the stressor and should disappear within six months.

Second, the symptoms should cause significant impairment in social, occupational, or other areas of life.

And lastly, the disturbance should not meet the criteria for another mental disorder such as depression, or be an exacerbation of a preexisting mental disorder - like anxiety that worsens after a divorce.

Next, reactive attachment disorder is a rare condition in which infants or young children don't get attached to their caregivers.

The symptoms appear following the lack of adequate care or negligence, and should be evident in a young child between the age of nine months and five years.

First, children must withdraw from caregivers, rarely seeking comfort when distressed and not responding to caregivers that comfort them.

Secondly, children must show persistent social and emotional disturbance characterized by at least two of the following three symptoms: minimal emotional or social bonds with others, limited positive affect, and lastly, episodes of unexplained irritability, sadness, or fearfulness even without being provoked.

Third, these children either have experienced social neglect or haven’t felt adequate comfort, stimulation, and affection from caregivers, have had repeated changes in primary caregivers which prevent stable attachments - especially common in the foster care system, or have lived in environments that severely limit opportunities to form attachments.

The disturbance shouldn’t be accounted for by a developmental delay which typically has an intellectual disability or by an autism spectrum disorder where there isn’t usually caregiver neglect.

The fifth condition is disinhibited social engagement disorder, a condition that appears mostly in infants and children that have experienced neglect in the first five years of life.

And as in reactive attachment disorder, the children should have experienced either social neglect or deprivation of affection from caregivers, repeated changes of primary caregivers, or grew up with few opportunities to form long-standing attachments.

The first criterion is disinhibited behavior towards strangers, described by at least two of the following four behaviors: having no reluctance in approaching and talking to strangers, having an overly familiar verbal or physical demeanor, not checking back with the caregiver after venturing away, and being willing to go off with a stranger without hesitation.

For example, these young children might approach a complete stranger on the street, have a small chat, and then sit on the stranger’s lap.