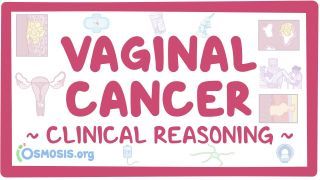 The most frequent histologic subtype is squamous carcinoma, which develops from the squamous epithelium of the vagina, in which case, it’s in relation to an HPV infection, particularly high risk strains, like HPV 16 and 18.

Sometimes, however, clear cell adenocarcinoma can occur, which develops from the glandular cells of the vagina, in which case it’s almost always because of exposure to a medication called diethylstilbestrol, or DES for short.

So, risk factors for vaginal cancer depend on the histologic subtype.

For vaginal squamous cell carcinoma, they’re the same as for cervical cancer: multiple lifetime sexual partners, early age at first sexual intercourse, as well as smoking, and immunocompromising conditions, like an HIV infection.

For vaginal adenocarcinoma, the only known risk factors are in utero exposure to DES.

This medication was prescribed to females between 1940 and 1970 to prevent pregnancy complications, like miscarriage - so their daughters would be at risk for developing vaginal adenocarcinoma.

Most of the time, vaginal cancer is asymptomatic.

If there are symptoms, abnormal postcoital or postmenopausal vaginal bleeding are the most common ones, and a watery, blood-tinged or foul-smelling vaginal discharge may be present as well.

In later stages, when the cancer has spread further than the vagina, pelvic pain may be present.

When the bladder is involved, there may also be symptoms like urinary frequency, and if the cancer has spread to the rectum, there may be constipation.

The speculum examination can usually identify any suspicious or abnormal looking masses inside the vagina, most commonly located on the upper third of the posterior vaginal wall.

Most commonly, vaginal cancer looks like a mass, but it can also look like a plaque or an ulcer.

In addition, if there are enlarged inguinal lymph nodes, that may be a sign of metastatic disease.

If a mass is visible in the vagina, a biopsy should be obtained.

If not, a vaginal cytology specimen should be obtained.

Results can be negative for intraepithelial lesions or malignancy, or NILM for short, or show varying degrees of atypia in the vaginal epithelial cells.

For example, some results come back as atypical squamous cells.

Atypical squamous cells look mildly atypical, and don’t necessarily develop into vaginal cancer, and they can further be classified as either ASC-US, where US stands for unknown significance, and there are no high grade intraepithelial lesions, or ASC-H, which is when there may be a high grade intraepithelial lesion and further testing is recommended.

ASC-US and LSIL results can be followed-up by repeating the vaginal cytology once a year for two years in a row, until two NILM results come back.

Alternatively, vaginal cytology and HPV genotyping may be repeated in one year, and if they come back as NILM with negative HPV genotyping, screening can be stopped.

A vaginal colposcopy is recommended from the get-go if vaginal cytology shows HSIL, ASC-H, or if high risk HPV is genotyping is positive at any test, initial or during follow-up, or if any result comes back as ASC-US or worse during the follow-up period.

Now, a colposcopy is done with a magnifying device called a colposcope to get a zoomed in view of the vagina, in order to obtain biopsies from suspicious looking areas.

For squamous cell carcinoma, the biopsy can also distinguish between precancerous lesions, like vaginal intraepithelial neoplasia, or invasive vaginal cancer.