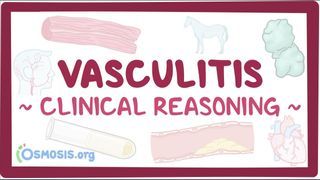 Vasculitides are a group of disorders that cause vasculitis, which is inflammation in the walls of the blood vessels.

Since blood vessels pass through organs - vasculitis damages those organs, and mimics a variety of diseases.

There are usually systemic symptoms like fever, fatigue, joint pain, and weight loss; as well as organ-specific symptoms that may literally involve any organ.

Whenever vasculitis is suspected, there’s inflammation, which is often reflected by an increased ESR, CRP, and increased white blood cell count, and sometimes requires a biopsy of whichever organ or tissue is involved.

The vasculitides are divided into groups based on the size of the arteries that are mainly involved.

This is the most common vasculitis in individuals over the age of 50.

The most frequently affected arteries are the external carotid, ophthalmic, and temporal arteries.

Symptoms include a headache and vision loss, and a worrisome complication is that there’s a high risk for a stroke.

Often, the temporal artery can become tender and rigid.

In addition, individuals can get jaw claudication, which is when there’s temporal artery insufficiency causing ischemia of the masticatory muscles, leading to pain while chewing.

Diagnosis of giant cell arteritis is done with temporal artery biopsy, looking for giant cells in the tissue.

The next large vessel vasculitis is Takayasu arteritis.

This is an extremely rare condition affecting mostly young women, generally younger than 40 years old, with increased incidence in the Asian populations.

Takayasu arteritis primarily affects the aorta and its major branches.

And the inflammation can cause turbulent blood flow which results in vascular bruits on auscultation of any involved artery - the aorta, carotid, renal, or femoral artery.

Diagnosis is based on CT angiography or magnetic resonance angiography of the involved artery, which shows skip lesions, where there’s stenosis or aneurysms with normal tissue in between.

Moving on to medium vessel vasculitis, first up is polyarteritis nodosa.

Polyarteritis nodosa sometimes pops up in individuals with Hepatitis B or C, likely due to molecular mimicry between hepatitis antigens and proteins within the blood vessel wall.

Polyarteritis nodosa is a multisystem disease that can affect nearly any site in the body.

Often there’s joint and muscle pain. Also the skin may be involved, and that can cause livedo reticularis which is a lace-like purplish discoloration of the skin.

The skin can also have palpable purpura, which are large reddish spots on the skin caused by bleeding underneath the skin, and the purpura can develop into large ulcers that can get infected. Ultimately, these ulcers can lead to gangrene.

Nerve involvement may occur. Some individuals develop what’s called a mononeuritis multiplex, which is a peripheral neuropathy that causes numbness, pain, and burning as well as muscle weakness.

Over time, individuals with polyarteritis nodosa can develop complications like intestinal ischemia and necrosis, kidney failure, and cardiovascular disease like hypertension or myocardial infarction, which can be fatal.

A key diagnostic feature on angiography is the presence of clusters of small aneurysms that look like a string of beads on a rosary - called the rosary sign.

Finally, a biopsy from blood vessels, skin, muscle, or nerve can show a pattern of inflammation consistent with polyarteritis nodosa.

The next medium vessel disease is Kawasaki disease, and it typically affects young children.

Children can develop bilateral bulbar Conjunctival injection; a polymorphous Rash due to sensitivity to sunlight; cervical lymphAdenopathy; oral mucous membrane changes, including injected or fissured lips, injected pharynx, or Strawberry tongue; and peripheral extremity changes, including erythema of palms or soles, edema of Hands or feet, and periungual desquamation.

Diagnosis of Kawasaki is based on the presence of at least four of those features. In addition, they have a fever for at least five days.

You can remember that these children CRASH and burn.

A severe complication of Kawasaki disease is coronary artery aneurysms, which can cause myocardial infarction. So an echocardiogram is done at diagnosis to evaluate for coronary artery involvement.

The second group are the immune complex vasculitides, which include cryoglobulinemic vasculitis, and IgA vasculitis which is also called Henoch-Schönlein purpura.

Granulomatosis with polyangiitis is characterized by granulomatous inflammation within the blood vessels that supply the eyes, ears, nose, larynx, lungs, and kidneys.

Eye involvement occurs when a granuloma is growing behind the eyeball and pushes on it, causing a painful exophthalmos, and even diplopia and optic nerve ischemia.

The small vessels of the eye may also be affected, causing scleritis or uveitis.

Destruction of the internal ear may lead to otitis and ultimately deafness.

A typical finding is the saddle nose deformity, caused by a huge granuloma that destroys the bony structure of the nose, and opens up the paranasal sinuses causing a recurrent sinusitis.

Many individuals have lung involvement nodules that resemble tumors, so diagnosis typically requires a lung biopsy.

Finally, renal involvement can cause glomerulonephritis, which can cause both hematuria and proteinuria, with or without a rise in serum creatinine, and can progress to kidney failure.

Laboratory tests show an elevated c-ANCA antibody, which targets the enzyme proteinase 3, but the definitive diagnosis requires a biopsy from an affected organ, generally skin, kidney, or lung.

Symptoms are quite similar to granulomatosis with polyangiitis, but these individuals also develop chronic rhinosinusitis, asthma, and blood eosinophilia.