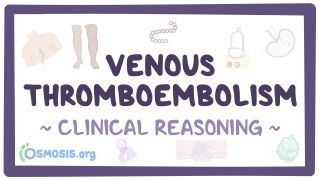 Our bodies are constantly maintaining a fine balance between making and breaking blood clots.

In the late 1800s, doctor Rudolph Virchow identified three factors that contribute towards the formation of clots: hypercoagulability, stasis of the blood, and endothelial injury.

If there’s any factor that tips the balance towards forming clots then a venous thromboembolism, or VTE can develop.

VTE can cause two clinical presentations: deep vein thrombosis, or DVT, and pulmonary embolism, or PE.

They are clumped together because they share the same pathophysiology, and often a DVT leads to a PE.

Risk factors for VTE revolve around Virchow’s triad, and can be remembered with the mnemonic “ THROMBOSIS”: “T” is for trauma or history of travel.

“H” is for hospitalization and hormones, meaning any form of exogenous estrogen such as hormone replacement therapy, tamoxifen or combined oral contraceptives, which promote the formation of clots in the venous circulation.

“R” is for relatives, that is family history of inherited hypercoagulable disorders, like Factor V Leiden.

“M” is for having any malignancy.

“B” is for long bone fractures.

“O” is for obesity and obstetrics; that is pregnancy and the early post-partum period.

“S” is for any form of major surgery, especially orthopedic surgery as well as smoking.

“I” is for immobilization, such as a paralyzed limb.

And the final “S” is for other sickness, like antiphospholipid syndrome, nephrotic syndrome, and paroxysmal nocturnal hemoglobinuria.

Alright, now DVTs usually involve the deep veins of the lower extremity, such as the proximal iliac and femoral veins, or the distal popliteal veins.

Upper extremity DVTs are very rare, and if they do happen, it’s usually because of an indwelling intravascular catheter.

On physical exam, a great telltale sign of DVT is a large calf diameter relative to the unaffected leg.

A commonly taught finding is the Homan’s sign; which is calf pain on passive dorsiflexion of the foot, but this finding is unreliable.

Painful blue swelling can occur due to massive iliofemoral thrombosis, which causes severe venous congestion in the affected limb.

Painful white swelling can occur due to a massive thrombosis that gets so big that it compresses nearby arteries, causing the leg to become pale due to arterial insufficiency and ischemia.

Once you suspect a DVT, the modified DVT Wells score should be obtained.

This score determines the pre-test probability of DVT, which is the likelihood that an individual has a DVT before any testing occurs.

The Wells score gives one point for each of the following factors: calf swelling that increases the circumference by at least 3 centimeters, swollen unilateral superficial veins, unilateral pitting edema, swelling of the entire leg, localized tenderness of affected leg, history of previous DVT, history of paralysis, paresis or recent casting of the affected limb, a history of recently being bedridden for 3 or more days, or active cancer.

Finally, if an alternative diagnosis is likely, and this subtracts two points.

If the probability of DVT is high, the next step would be to get a duplex ultrasound of the affected extremity.

Now normally, the veins are made of thin walls, and so they’re easy to compress with an ultrasound probe.

A classic finding that is virtually diagnostic of DVT is being unable to compress the affected vein, indicating that there’s a thrombus in the lumen preventing you from doing so.

On the other hand, in case of low probability DVT, a d-dimer is ordered.

The d-dimer is a product of fibrin degradation, and fibrin is found in clots.

So if the d-dimer is elevated, there’s a clot somewhere in the body.

The problem is that many other conditions like cancer, sepsis, and pregnancy can also have a high d-dimer. Therefore you can not use the d-dimer to diagnose DVT, however, you can use it to exclude DVT.

Now, although the duplex ultrasound is the best initial test, the gold standard test is venography.

If the duplex ultrasound shows a DVT, then treatment with anticoagulation is begun, then it’s typically repeated after 2 to 3 days to make sure there really is no DVT.

Alright, now PE usually occurs when a part of DVT clot breaks free and floats into the inferior vena cava, then to the right atrium, right ventricle, and finally gets stuck in the pulmonary artery or one of its branches.

This creates an area of the lung that is well-ventilated, but not well perfused. Therefore, that area of the lung is now dead-space, meaning air that is not participating in gas exchange, creating a mismatch between ventilation and perfusion.

Consequently, individuals with PE develop an acute-onset of shortness of breath and pleuritic chest pain.

Some individuals can develop hemoptysis.

On physical exam, the individual will be tachypneic, tachycardic, and hypoxemic.

If the PE is severe, then cardiac output may be affected, resulting in hypotension, syncope, and possibly acute right heart failure.

Now, the thing is, PE can be very subtle. Individuals can present with only tachypnea and hypoxemia, and so it’s important to keep a high clinical suspicion in individuals with risk factors.

So when PE is suspected, the modified Wells criteria for PE should be used.

To be clear, these are different from the modified DVT Wells criteria.

The components of the modified Wells criteria for PE can be remembered with the mnemonic: “ EAT CHIPS”.

“E” is for edema in the leg or any other symptoms of DVT, and this is given 3 points.

“A” is for alternative diagnosis being less likely, and this also gets 3 points.

“T” is for tachycardia, which is given 1.5 points.

“C” and “H” are for cancer and hemoptysis, and each is given 1 point.