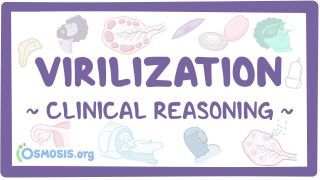 Hirsutism and virilization reflect excess androgen production in a genetically female individual, and are characterized by excess male-pattern hair growth.

Both hirsutism and virilization may or may not be associated with weight gain, acne, and even male pattern balding.

With virilization, however, females may also have a deepened voice and clitoromegaly, which are not seen with hirsutism.

The excess androgens can come either from the ovary - and the main androgen here is testosterone - or the adrenal glands - which mainly secrete an androgen called dehydroepiandrosterone sulphate.

Ethnicity must be taken into account when interpreting the score, as the normal amount of body hair can vary between ethnic groups.

Given this variation, the most important consideration is not necessarily the amount of body hair a female has, but rather if the pattern of hair growth has changed, or the rate of growth has increased.

In order to elucidate the cause of excess body hair growth, the first step is to rule out any medications which may cause it - like minoxidil, or exogenous androgens. In this case, treatment is to stop the medication and reassess the individual in six months. If hirsutism resolves, no further evaluation is needed.

If hirsutism persists after 6 months, or if the female was not on any medication to begin with, then other causes must be considered.

The majority of cases are due to polycystic ovarian syndrome, or PCOS.

Other causes include non-classic congenital adrenal hyperplasia, androgen secreting tumors of the ovary or the adrenal gland, or ovarian hyperthecosis, which is when there are nests of luteinized theca cells on the ovaries that secrete huge amounts of testosterone.

PCOS and non-classic congenital adrenal hyperplasia are more common in premenopausal females, and have a similar clinical presentation.

Aside from hirsutism, affected females may have acne and male-pattern balding, as well as menstrual irregularities, like oligomenorrhea, meaning fewer than 9 periods in a year, or amenorrhea, meaning no bleeding for 3 or more consecutive months.

PCOS is considered a dysfunction of the hypothalamo-pituitary-ovarian axis, which controls the menstrual cycle and normal ovarian function. As a consequence, ovulation doesn’t occur, and too many ovarian follicles develop and secrete excess ovarian androgens, mainly testosterone.

Non-classic congenital adrenal hyperplasia, on the other hand, is when the enzyme 21-hydroxylase is deficient.

This enzyme helps convert a cortisol precursor called 17-hydroxyprogesterone into 11 deoxycortisol, which eventually becomes cortisol itself.

With both conditions, a transvaginal ultrasound shows polycystic ovarian morphology - that means more than 12 follicles ranging from 2 to 9 millimeters in size, or an ovarian volume greater than 10 cubic centimeters.

Now to distinguish them, an 8am serum 17-hydroxyprogesterone level comes in handy.

To confirm non-classic congenital adrenal hyperplasia, an ACTH stimulation test can be done.

This is when the individual is given 250 micrograms of Cosyntropin, which is a synthetic analog of ACTH - this will stimulate adrenal hormone production.

Then, serum 17-hydroxyprogesterone is measured again one hour after the injection. Values higher than 1500 nanograms per milliliter confirm non-classic 21-hydroxylase deficiency.

Treatment for PCOS depends on whether or not they have insulin resistance or desire a pregnancy.

To assess for insulin resistance, a two hour glucose tolerance test should be done - that’s when the person is given 75 grams of glucose, and then blood samples are taken at time intervals to figure out how well it’s being cleared from the blood.

At the time interval of 2 hours later, a level of 140 milligrams per deciliter or higher indicates insulin resistance, which, if left unchecked, may progress to diabetes.

In individuals with insulin resistance who desire a pregnancy, metformin therapy is recommended, because it decreases serum testosterone levels and improves ovulation rates, especially when it’s associated with weight loss of at least 5 to 10 percent of body weight.

If they desire pregnancy, and have trouble conceiving even after metformin therapy and losing weight, ovulation can be induced with clomiphene citrate.

Individuals without insulin resistance, who don’t want a pregnancy, can be started on combined oral contraceptive pills.

Alternatively, if oral contraceptives are contraindicated, or if they don’t seem to control the hirsutism on their own, spironolactone, an aldosterone receptor antagonist which has antiandrogen effects, can be used.

Similar to PCOS, combined oral contraceptives can be used to lessen hirsutism and induce regular menses in females who do not desire pregnancy, and if it’s not effective, then an anti-androgen medication like spironolactone can be given as well.

If they wish to get pregnant and infertility is an issue, ovulation can be induced with drugs like clomiphene citrate.

Now, finally, androgen secreting tumors of the ovary or the adrenal glands may be suspected in a female with either rapidly worsening hirsutism or virilization.

Serum testosterone should be drawn, and levels are almost always higher than 150 nanograms per deciliter.