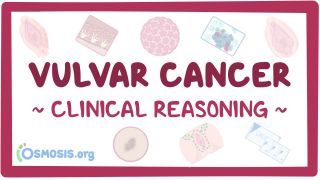 Over 90% of vulvar cancers are squamous cell carcinomas, which develop from the squamous epithelium of the vulva.

A particular type of adenocarcinoma is Paget’s disease of the vulva - which is a type of cancer that usually develops in the ducts of the breast, but can rarely develop in other locations, such as the vulva.

Ok, now, more than 50% of vulvar squamous cell carcinomas are in relation to an HPV infection, particularly high risk strains, like HPV 16 and 18 - just like with cervical cancer.

And just like cervical cancer, vulvar cancer starts out as vulvar intraepithelial neoplasia, and it may take many years for it to even progress to cancer.

Other risk factors for squamous cell carcinomas include smoking, immunosuppressive conditions like an HIV infection, and lichen sclerosus, which is a skin disorder than frequently affects the genitals, making the skin become very thin and white, like cigarette paper.

Additionally, individuals with cervical or vaginal cancer have a higher risk of vulvar cancer, probably because they can all be caused by high risk HPV strains.

Symptoms vary depending on histologic subtype, but at the end of the day, there’s always a vulvar lesion, and pruritus - the fancy word for itching.

Sometimes there may also be associated pain, bleeding or discharge. Squamous cell carcinomas usually look like a red, pink or white bump, or it may look like a wart, or an open sore that doesn’t heal.

Vulvar melanomas, on the other hand, are usually black or dark brown - and sometimes they may start in a mole, in which case the ABCDE rule can be used to distinguish the cancer from the mole. A is for asymmetry, which means one half of the mole looks different than the other, B is for border irregularity, C is for color, meaning there are various colors within the same lesion, D is for a diameter wider than 6 millimeters, and E is for evolving - meaning the mole changes in size, shape or color over time.

Adenocarcinomas that develop from Bartholin’s glands, present like a distinct lump on either side of the opening of the vagina. Finally, Paget’s disease of the vulva presents as a red, scaly, sore lesion.

To diagnose vulvar cancer, a biopsy is done. If subclinical vulvar lesions are suspected, a vulvoscopy may also be done - which is when a colposcope is used to get a zoomed-in view of the vulva, and any suspicious looking areas are biopsied.

The biopsy can be an excisional biopsy, when the lesion is small and it’s removed entirely, along with a little bit of tissue around it, or a punch biopsy, when just a sample is taken.

The biopsy confirms the malignant character of the lesion, and it also differentiates between the histologic subtypes, and this guides further treatment.

Immunotherapeutic agents like imiquimod creams can also be given, and they’re also applied by the individual. Alternatively, the lesion can be removed through ablative procedures, like cryoablation, laser ablation, or electrocautery, or excisional procedures.