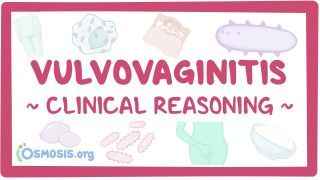 In females of reproductive age, the vagina is normally colonized by a bacterial species, called Döderlein lactobacilli, which convert glucose into lactic acid.

This biochemical process keeps the vaginal PH at an acidic 4.5 - which is not suitable for the growth of pathogenic organisms.

Vulvovaginitis refers to the inflammation of the vagina and the vulva, which usually go hand in hand - given their close proximity.

When there’s inflammation there are typically symptoms like a change in the color, volume or smell of vaginal discharge, itching, a burning sensation, irritation, dyspareunia, or pain during sex, and dysuria, or pain during urination.

Inflammation can be due to an infection, or non-infectious causes that lead to an imbalance in the normal vaginal flora.

Non-infectious etiologies include atrophic vaginitis in postmenopausal females, and retained foreign bodies, like tampons or condoms.

These can usually be ruled out by doing a thorough speculum exam, that will show a pale, smooth and shiny vaginal epithelium with atrophic vaginitis, or identify the retained foreign body, which can then be removed.

For atrophic vaginitis, treatment is with local estrogen creams.

Bacterial vaginosis and candida vulvovaginitis are due to an imbalance in the normal vaginal flora, and trichomoniasis is a sexually transmitted infection.

Other sexually transmitted infections, like gonorrhea, chlamydia or mycoplasma, typically cause cervicitis, but rarely can also cause vaginitis.

Ok, now, bacterial vaginosis develops when the number of lactobacilli decreases, and that leads to an increase in pH, allowing other bacterial species like Gardnerella vaginalis to proliferate.

A risk factor for developing bacterial vaginosis is having a new sex partner or having multiple sexual partners.

However, bacterial vaginosis is not considered a sexually transmitted infection, because it doesn’t colonize the male reproductive tract, so it’s solely thought to be due to a bacterial imbalance of the female reproductive system.

Other risk factors include douching, antibiotics and use of intrauterine devices.

With bacterial vaginosis, the discharge is usually thin, homogenous, gray or off-white, and has a foul smell, which typically worsens after unprotected sexual intercourse.

The vulva is not affected, and there are usually no other symptoms - and if there are, that suggests a mixed infection.

Diagnosis of bacterial vaginosis is most commonly done with Amsel criteria, and three out of the following four must be met for the diagnosis.

Second, the vaginal pH must be above 4.5.

To test for that, a sample of vaginal discharge is smeared on a slide, and a drop of 10% KOH is added to it - and with bacterial vaginosis, there’s a fishy odor.

Finally, on a saline wet mount of a discharge sample, there are clue cells.

This means that a sample of discharge is smeared on a slide, and a drop of saline is added to it.

And on microscopy, clue cells look like vaginal epithelial cells that have coccobacilli on their edges, so it looks like the borders of the cells are stippled.

Now, on an important side note, latex condoms should not be used during treatment with clindamycin creams, because the cream can render the condoms less effective.

Candidiasis is caused by a species of Candida, most often it’s Candida albicans, which is normally present in low numbers in the vaginal flora.

Risk factors for candidiasis include diabetes mellitus, recent antibiotic use, immunosuppression, which may be seen in the context of glucocorticoid treatment and, finally, increased estrogen levels - which can be due to combined oral contraceptive use, estrogen therapy, or pregnancy.

The most notable symptom of candidiasis is intense itching, and there may also be thick, white, odorless vaginal discharge - frequently compared to the aspect of cottage cheese.