A 3-week-old boy presents to the emergency department due to worsening vomiting at home. The vomiting began suddenly today, and the patient has been more sleepy than usual. He was born full-term at home to a mother who has a history of epilepsy but is otherwise healthy. The patient has not received any vaccines since the mother is concerned they will increase his risk of developing “behavioral disorders.” Temperature is 37.0°C (98.6°F), pulse is 190/min, respirations are 52/min, and blood pressure is 104/54 mmHg. On physical examination the infant begins seizing with tonic-clonic movements in the upper and lower extremities. He is noted to have a bulging anterior fontanelle and downward displacement of the eyes. No pain is elicited with flexion of the neck. Point of care glucose is 60 mg/dL. Which of the following best describes the etiology of this patient’s clinical presentation? 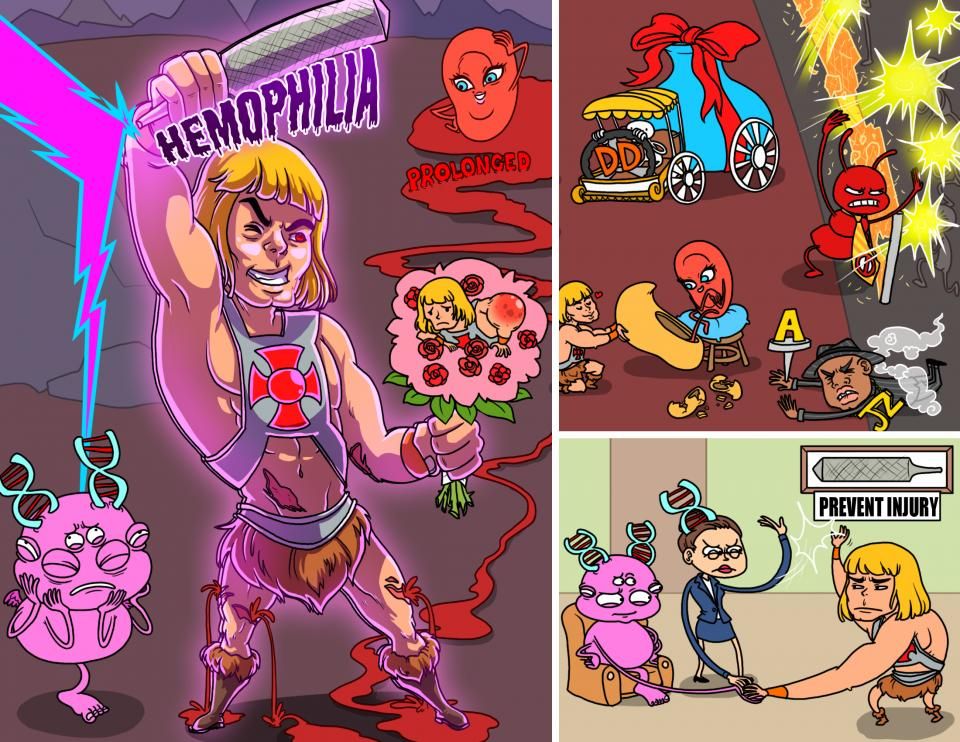 At the hematology ward, there’s Braden, a 5 year old male, who developed prolonged bleeding after circumcision.

His mother is worried because he has a history of recurrent hemarthrosis after minor falls.

Family history reveals a relative of his mother who suffered from bleeding diathesis.

Her mother states that she did not get the standard care after delivery. CBC, PT and PTT are ordered for both patients.

They both have normal platelet count.

Now, Braden has normal PT but elevated PTT, while Harlow has both PT and PTT elevated.

Both Braden and Harlow are suffering from a hemostasis disorder.

The first includes problems with primary hemostasis, which is the formation of the platelet plug, so they are also called platelet disorders.

The second group includes problems with secondary hemostasis, which is making a strong fibrin clot through activation of the intrinsic, extrinsic and common coagulation pathways, and so they’re known as coagulation disorders.

Let’s focus on coagulation disorders that are usually due to a decrease in the number of clotting factors and causes include hemophilia and vitamin K deficiency.

So, let’s look at hemophilia first.

They are a group of inherited bleeding disorders caused by deficiencies in various coagulation factors.

Hemophilia A and B are X-linked recessive disorders so a high yield fact is that they almost exclusively affect males while females are carriers.

A big hint for hemophilia is a family history of a maternal relative with a bleeding disorder.

Hemophilia C on the other hand is an autosomal recessive disorder, meaning it can affect both males and females, leading to a deficiency in factor XI.

Vitamin K acts as a cofactor to an enzyme found in the liver called gamma glutamyl carboxylase, which converts the non-functional forms of coagulation factors II, VII, IX, and X into their functional forms.

So, all pathways in the coagulation cascade are affected in vitamin K deficiency.

Normally, vitamin K comes from the diet, like in leafy dark green vegetables, like spinach, kale and chard, or can be made by intestinal microbial flora.

So, it’s easy to see that vitamin K deficiency can occur in malabsorption syndromes like cystic fibrosis and celiac disease, or with prolonged use of broad-spectrum antibiotics that kill intestinal microbial flora such as fluoroquinolones and cephalosporins.

Now, deficiency is rare in adults but neonates are particularly susceptible because breast milk is low in vitamin K and at the same time, their intestinal flora is still unable to produce it.

That’s why every newborn gets an intramuscular injection of vitamin K.

Whatever the cause, coagulation problems share some common symptoms and these are high yield!

People with these disorders can get large bruises after very minor trauma, and this is called easy bruising.

Now, a dangerous complication is intracerebral hemorrhage, or bleeding into the brain, which can cause a stroke or increased intracranial pressure.

For hemophilia A, B and C, the symptoms are nearly clinically identical, which makes sense since factors VIIIa, IXa and XIa work together in the coagulation cascade to activate factor X.