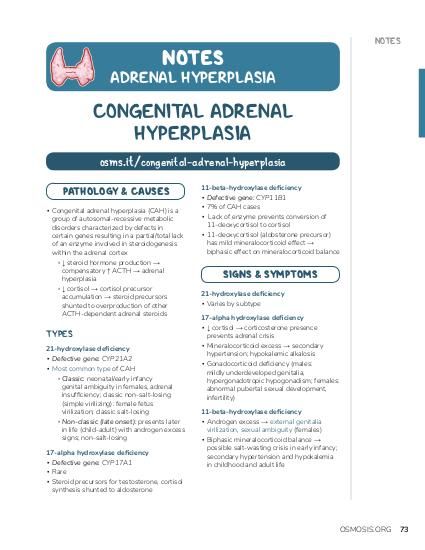 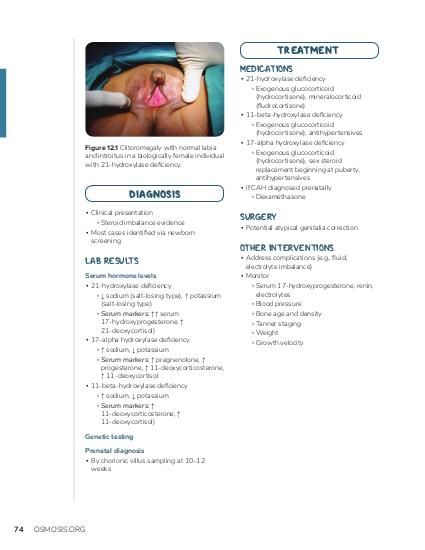 A newborn is delivered at 32 weeks gestation to a 30-year old woman, gravida 1, para 1. The newborn comes for routine investigation and is found to have ambiguous genitalia with fusion of labial folds and clitoromegaly. The karyotype is 46 XX. Physical examination shows hyperpigmentation of skin folds and generalized skin darkening.  Which of the following is the most likely explanation for this patient’s physical findings? 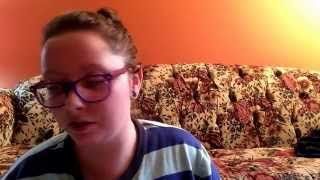 My story about Congenital Adrenal Hyperplasia 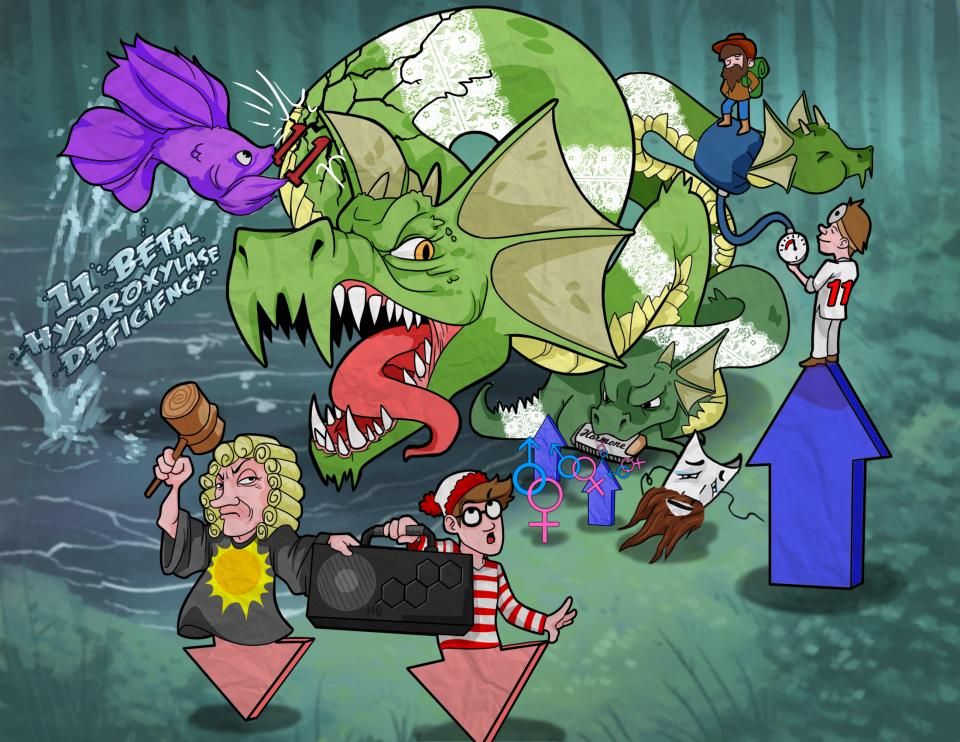 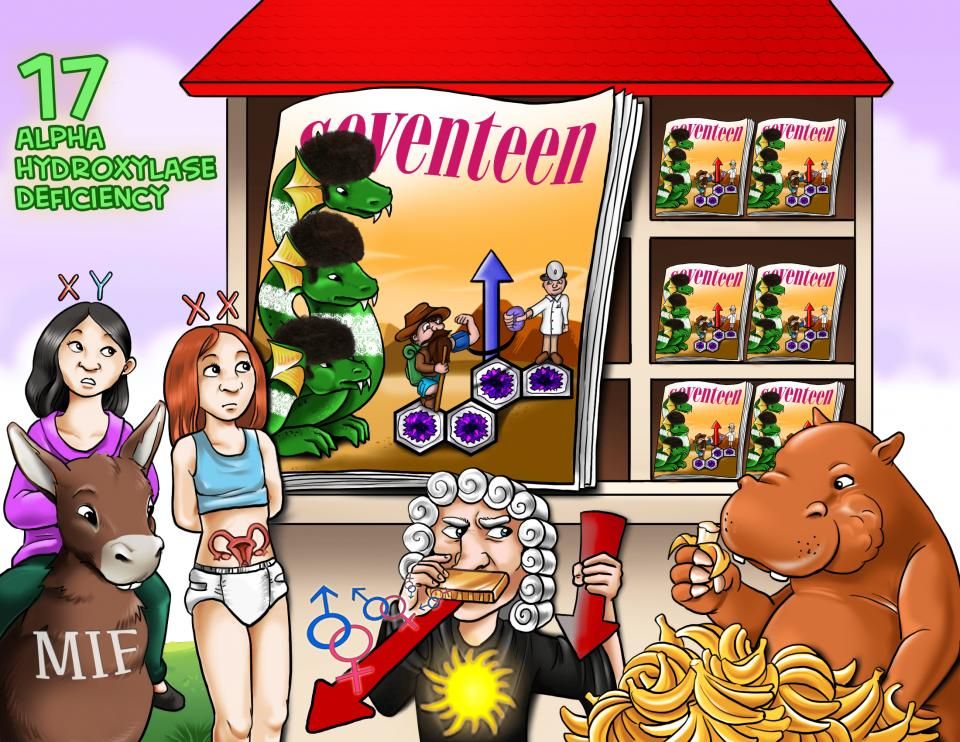 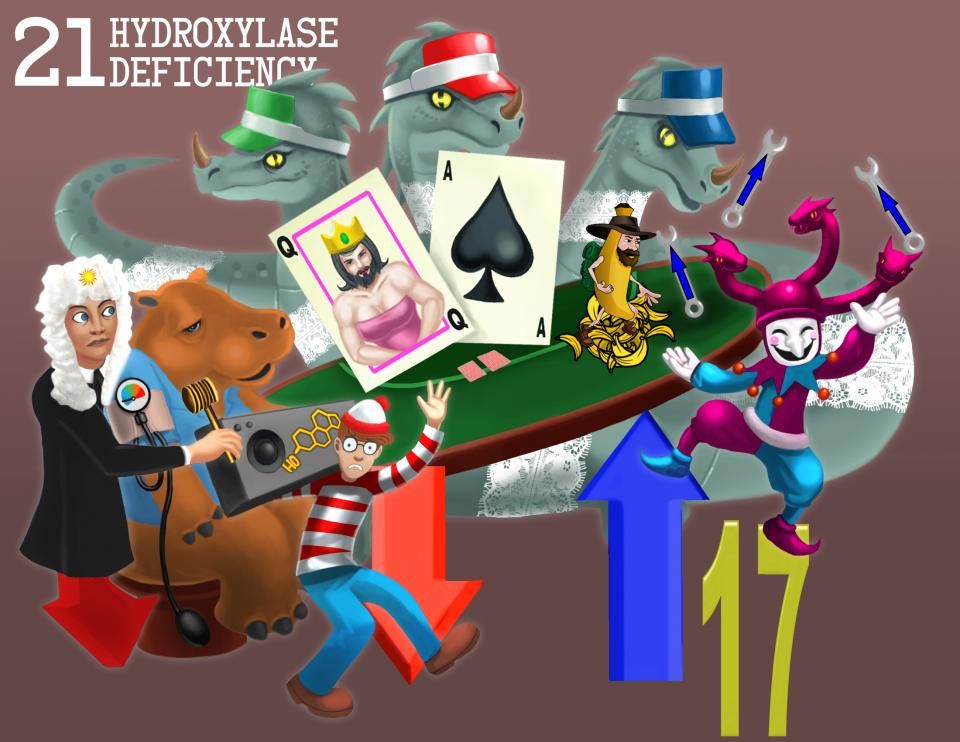 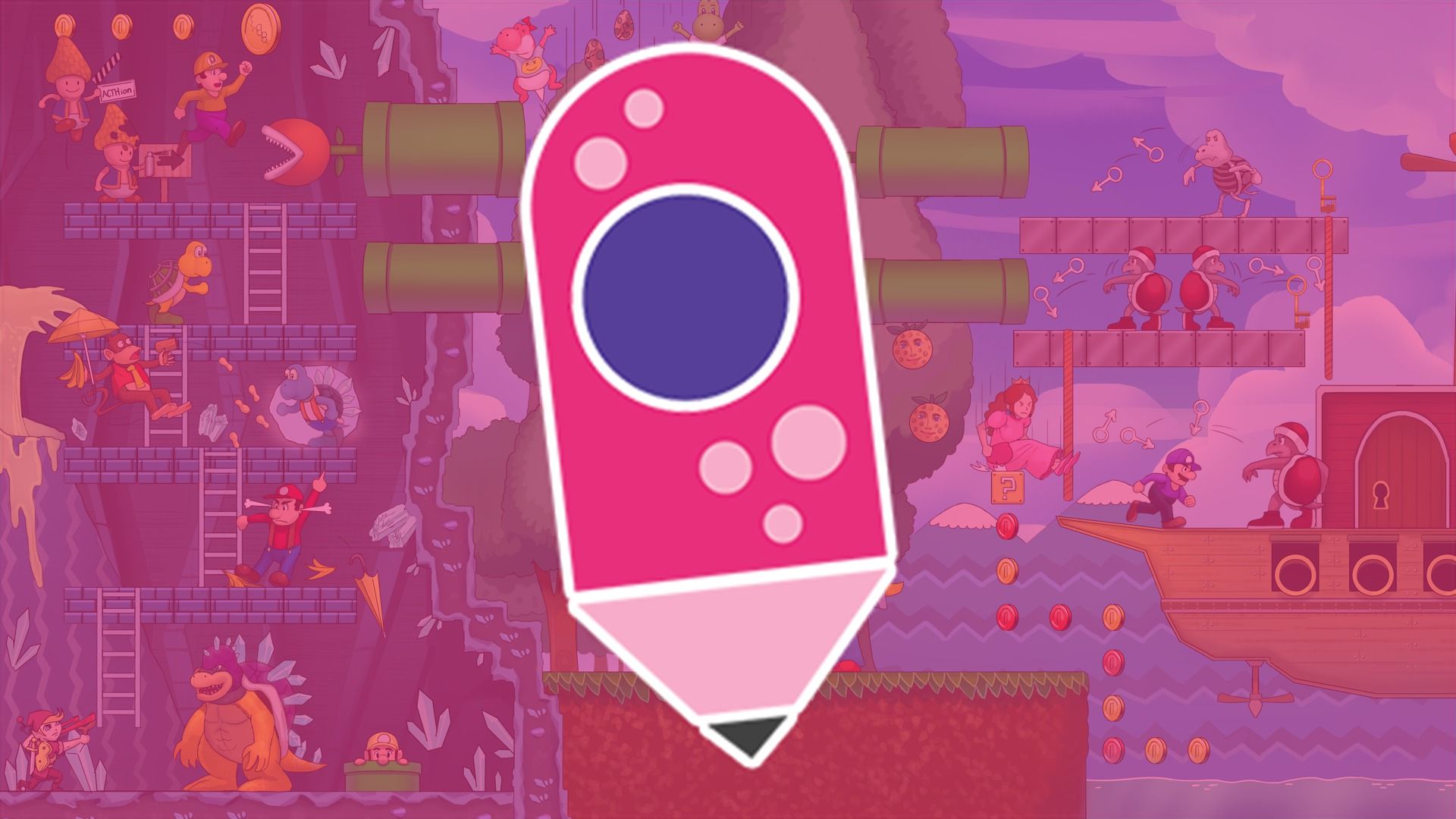 With congenital adrenal hyperplasia, congenital means present from birth, adrenals refer to the two adrenal glands that sit above the kidney, and hyperplasia refers to increased cell proliferation which leads to tissue growth.

So congenital adrenal hyperplasia is a disease where there are enlarged adrenal glands that are present at birth, and the reason for the adrenal enlargement is that there’s a deficiency in an enzyme involved with steroid production.

The first step in aldosterone production is when an enzyme called cholesterol desmolase turns cholesterol into pregnenolone.

Pregnenolone is the precursor to all of the adrenal cortex hormones, sometimes called the steroid hormones.

Next, pregnenolone is turned into progesterone by the enzyme 3 beta-hydroxysteroid dehydrogenase.

Then, progesterone is turned into 11 deoxycorticosterone by the enzyme 21 hydroxylase.

And finally, corticosterone is turned into aldosterone by the enzyme aldosterone synthase.

Whew! That’s like going through the washing machine twice.

So the final result is aldosterone which is part of a hormone family called the renin-angiotensin-aldosterone system.

Aldosterone signals the kidney to reabsorb more Na+ into the blood and excrete more potassium.

When Na+ is reabsorbed, water also moves into the blood, which increases blood volume and blood pressure.

The middle layer of the adrenal cortex is the zona fasciculata, and the cells there make the hormone cortisol.

This process starts when pregnenolone and progesterone move into the zona fasciculata.

17 hydroxypregnenolone is then turned into 17 hydroxyprogesterone by the enzyme 3 beta-hydroxysteroid dehydrogenase.

Then, all of the 17 hydroxyprogesterone is turned into 11 deoxycortisol by the enzyme 21 hydroxylase.

Cortisol is needed in times of emotional and physical stress like arguing with a friend or fleeing from a pack of raccoons.

In those situations, the hypothalamus—which is an almond-size structure in the brain, releases corticotropin-releasing hormone which acts on the pituitary gland, the pea-sized structure sitting just underneath the hypothalamus.

One of cortisol’s main jobs is to increase blood glucose levels by promoting gluconeogenesis in the liver.

This is the formation of glucose from noncarbohydrate sources, like amino acids or free fatty acids.

The increase in glucose lets the body respond appropriately to those raccoons, or other stressors.

Finally, there’s the innermost layer of the adrenal cortex which is the zona reticularis, and cells there make a group of sex hormones called androgens.

This process starts when 17 hydroxypregnenolone and 17 hydroxyprogesterone from the zona fasciculata move into the zona reticularis.

Dehydroepiandrosterone can also be turned into androstenedione by the enzyme 3 beta-hydroxysteroid dehydrogenase.

Then, androstenedione is turned into testosterone by the enzyme 17 beta hydroxysteroid dehydrogenase.

Alternatively you can also get testosterone by converting dehydroepiandrosterone to androstendiol first with the same enzyme, then using 3 beta hydroxysteroid dehydrogenase to get testosterone.

The adrenal glands are involved in testosterone production in both men and women, but the amount that the adrenals contribute is pretty small in men compared to the testes.

In men testosterone is responsible for the development of male reproductive organs and secondary sex characteristics like voice changes and facial, underarm, and pubic hair.

Since women do not have testes, they have relatively low levels of testosterone, and it’s just enough to influence secondary sex characteristics like underarm and pubic hair.

Congenital adrenal hyperplasia can be caused by a number of enzyme deficiencies in the adrenocortical steroid pathway.

Low level of cortisol triggers the pituitary to release more ACTH which stimulates the cells in the adrenal gland to continually proliferate.

This results in the enlargement, or hyperplasia, of the adrenal gland.

The most common enzyme deficiency is 21 hydroxylase deficiency which is found in both the zona glomerulosa and the zona fasciculata.