A 6-month-old infant boy is brought to the pediatrician by his mother. The patient's mother delivered the child at home and did not receive consistent prenatal care. The patient’s weight and head circumference are <5th percentile. An examination of the head is consistent with microcephaly. He is noted to have severe developmental delay with attainment of few milestones in speech, gross motor, and fine motor development. The infant cannot roll over or lift his head. An MRI of the brain is obtained and shown below: 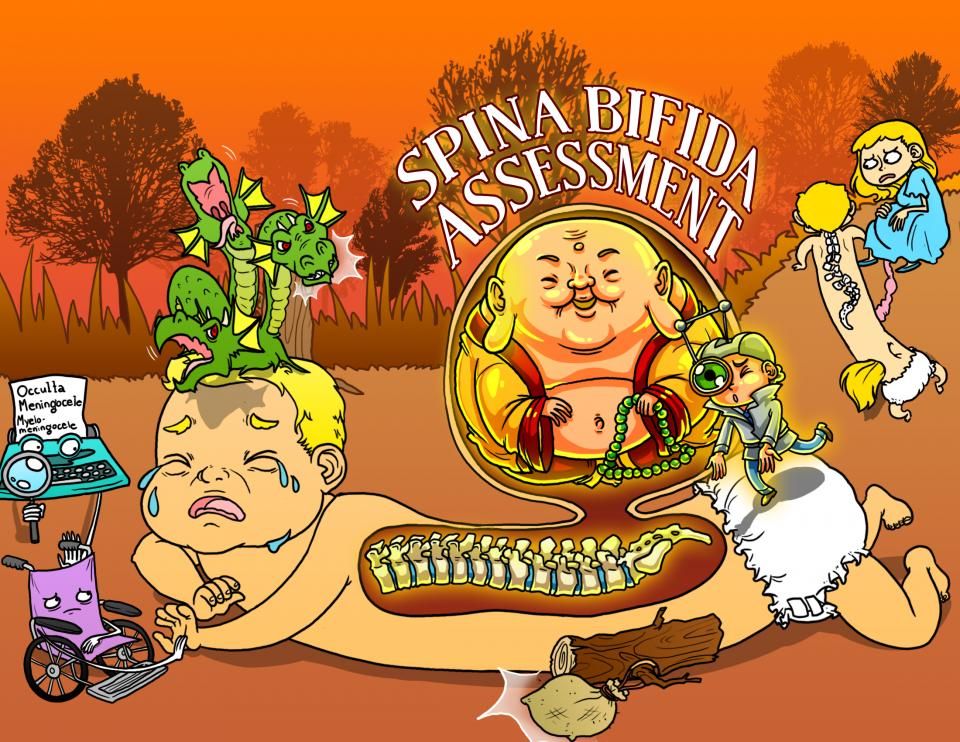 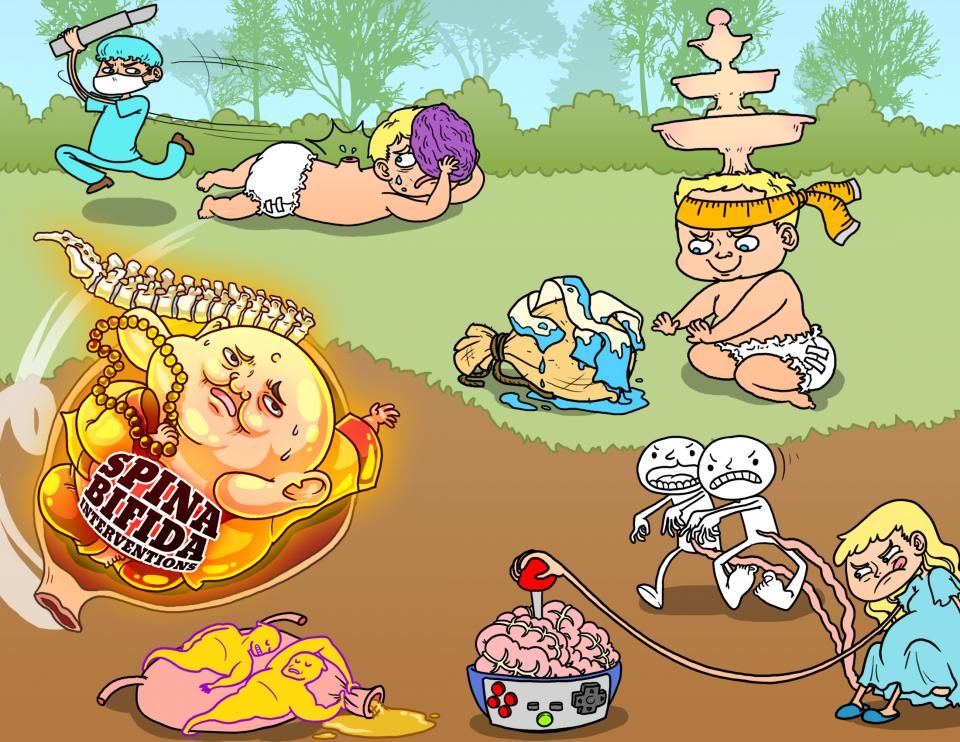 At the physician’s office, a 30 year old male named Alex came in because of headaches and dizziness for the past few months. He also often stumbles while walking and recently fell down the stairs. His past medical history is insignificant. MRI of the brain and spinal cord shows herniation of the cerebellar tonsils.

Next to Alex, there’s a mother with her 4 years old child named Evi who had recurrent urinary tract infections. Evi was born with leg paralysis and leg deformities. Clinical examination reveals a mass on her lower back.

All right, both of them have a congenital neurological malformation, which occurs when there’s a primary defect in the developmental process of the nervous system. These conditions appear as the baby develops in utero and can vary in severity and presentation, ultimately impacting the infant's health, development, and survival. The most high yield neurological malformations are neural tube defects, posterior fossa malformations, syringomyelia, and holoprosencephaly.

Okay, let’s take a closer look at these disorders, starting with neural tube defects, or NTDs, which include spina bifida and anencephaly. They’re relatively common anomalies that develop when a portion of the neural tube - the precursor of the central nervous system- fails to close as it should during the fourth week of gestation. When the posterior neuropore doesn’t close well, the baby is born with spina bifida, which is Latin for “split spine”. But when the anterior neuropore doesn’t close properly, the forebrain fails to develop, and the baby is born with anencephaly or absence of a major portion of the brain and the skull. In spina bifida, there’s incomplete closure of the vertebrae and membranes of the spinal cord.

A very high yield risk factor for NTD is folate or vitamin B9 deficiency in the mother. For this reason, folic acid, which is the manufactured form of folate, should be given at least one month prior to conception and during early pregnancy. Another important concept for the exams is that certain medications can also increase the risk for an NTD because they interfere with folate metabolism. These include valproic acid and phenytoin, which are antiepileptics; trimethoprim and sulfonamides, which are antibiotics; and methotrexate, which is an anticancer medication. Finally, other risk factors that increase the risk for NTDs include obesity and maternal diabetes.

Okay, now clinical presentation depends on the type of NTD. Let’s start with spina bifida that has four important subtypes: spina bifida occulta, meningocele, myelomeningocele, and myeloschisis. The most common and most mild form is spina bifida occulta, where “occulta” is Latin for hidden. This is because the deformities in the tissues of the lower back are tiny. In this form, the spinal cord and surrounding tissue don’t protrude and no neural tissue is forced into the spaces in between the vertebrae. Individuals with this form are often asymptomatic, and the condition is only found later in life. At most, individuals can have hair, a dimple, or a birthmark on their lower back above the site of the lesion.

Next is meningocele, sometimes called a meningeal cyst. In this condition, the meninges (but not the spinal nerves) slip into the gaps between the deformed vertebrae. This is the least common form of spina bifida. Meningocele is an open NTD, but because the spinal cord itself is not damaged, these individuals experience only mild symptoms.

Now, a more serious form of spina bifida is myelomeningocele, also called meningomyelocele. It occurs when the spinal cord and the surrounding meninges protrude out of an opening in the vertebrae and are stuck in a cyst like pouch protruding from the back. This condition is also an open NTD. But unlike meningocele, myelomeningocele can cause serious damage to the exposed nerves. There is also an increased risk of infection. Symptoms of myelomeningocele include loss of sensation (or paralysis) in the areas of the body below the damaged site; problems with bladder or bowel movement; seizures; and leg and foot deformities.

Another, even more severe form of open spina bifida, is myeloschisis, also referred to as rachischisis. In this form, the neural tissue protrudes from the back without the meninges or the skin covering it, so it’s exposed completely to the external environment.

Now apart from spina bifida, a very severe form of NTD is anencephaly, where a major part of the brain and skull is absent. A high yield concept about anencephaly is that the part of the brain that is responsible for neural control of swallowing is absent. As a result, the fetus can’t properly swallow amniotic fluid and so excess fluid builds up in the amniotic sac. This is known as polyhydramnios, and it increases the risk of complications such as fetal malposition, premature birth, and placental abruption. Due to the severe nature of the condition, the risk of stillbirth is high and surviving infants only survive hours to days after birth.

Okay now, prenatal diagnosis of neural tube defects is comprised of two approaches: ultrasound examination and measurement of maternal serum alpha-fetoprotein. Ultrasound detects most of the defects and classifies them as open or closed based on whether the spinal cord is exposed.

Next, Alpha-fetoprotein synthesized by the fetal yolk sac, gastrointestinal tract, and liver, is usually increased in NTDs except in spina bifida occulta, where AFP is normal. Serum testing is performed at 16 to 18 weeks of gestation. Elevated levels of acetylcholinesterase in amniotic fluid can also confirm the diagnosis of an NTD. After birth, diagnosis is clinical, but an MRI is needed to better define the extent of the defect and exclude other central nervous system abnormalities.

Treatment of NTDs depends on the type and severity of the condition and on the presence of complications. Surgery aims to close the defect, but in the more severe forms of NTD (like anencephaly), life expectancy is just past birth.

A type I Chiari malformation occurs when only the cerebellar tonsils herniate down into the foramen magnum. As a result, the displaced cerebellum can compress the fourth ventricle and block the normal flow of cerebrospinal fluid from the ventricles into the subarachnoid space. Consequently, cerebrospinal fluid builds up in the ventricles, which is called hydrocephalus, and leads to increased intracranial pressure.

Typically, type I Chiari malformations are asymptomatic, or symptoms only appear later in life during adolescence or adulthood. Now, cerebrospinal fluid can also build up in the spinal canal, eventually causing it to widen. This can lead to a high yield disorder called syringomyelia. Remember for your exams that Type I Chiari malformation is the main cause of syringomyelia.

As a result, there’s bilateral loss of pain and temperature, especially in the upper extremities and back. This is often described as a "cape-like" distribution due to damage at the level of C4-C6. Although it sounds nice to not feel pain, this can lead to neuropathic arthropathy or Charcot joints, which is when there’s repeated trauma and inflammation in a joint because there’s no pain response.