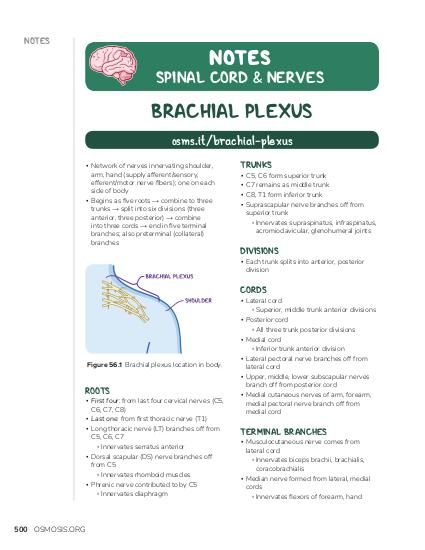 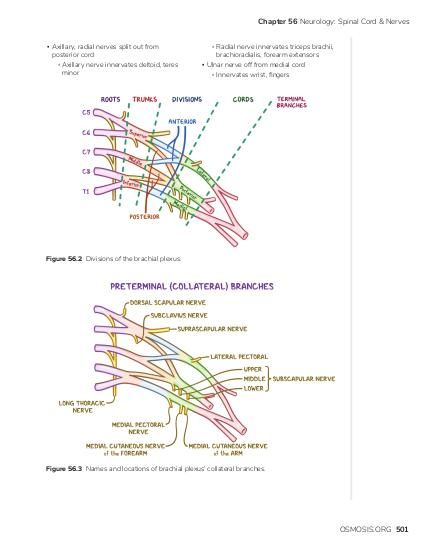 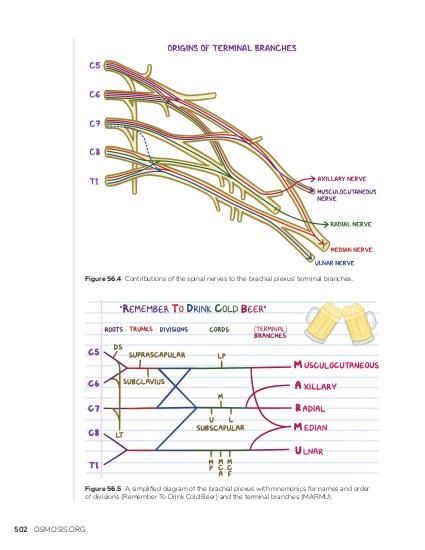 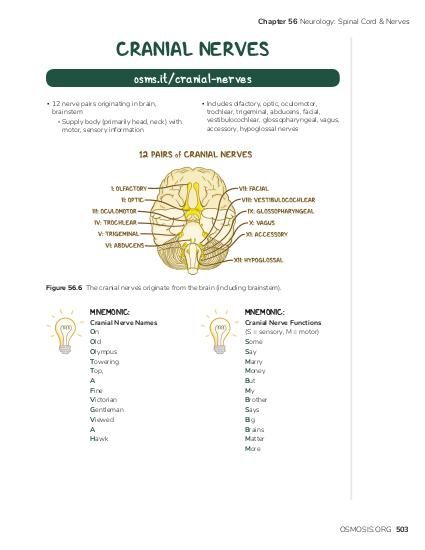 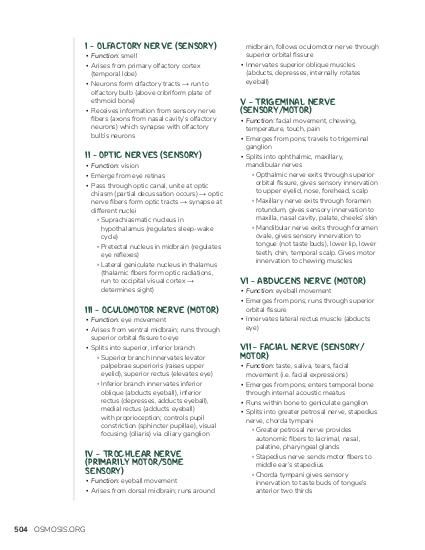 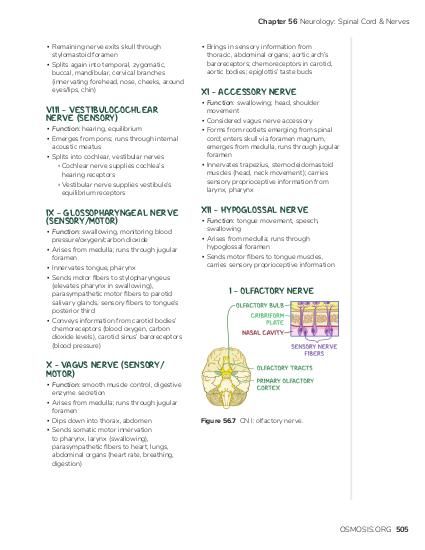 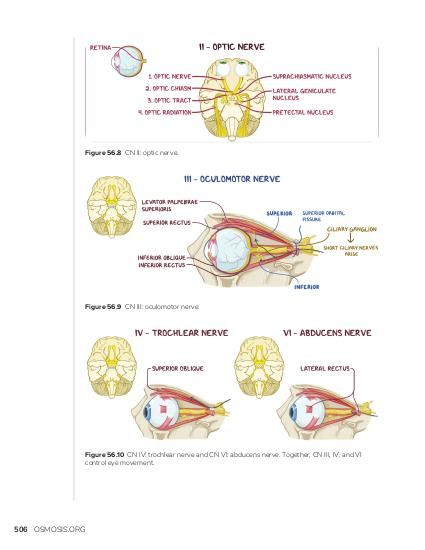 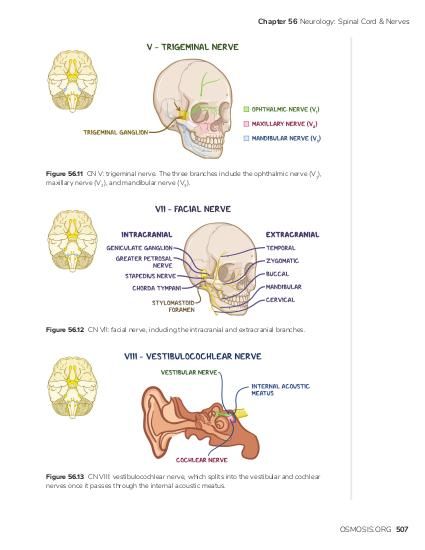 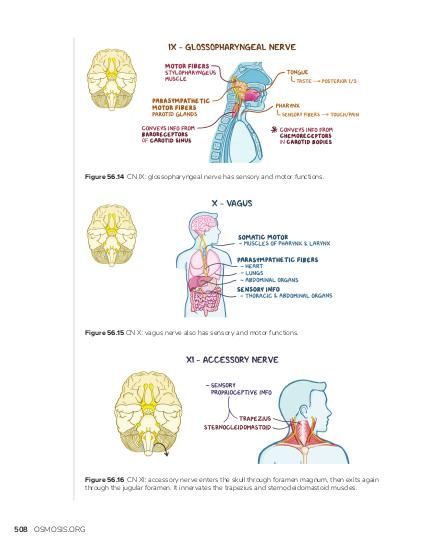 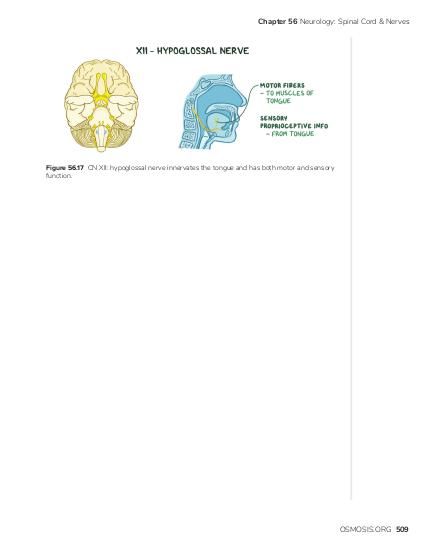 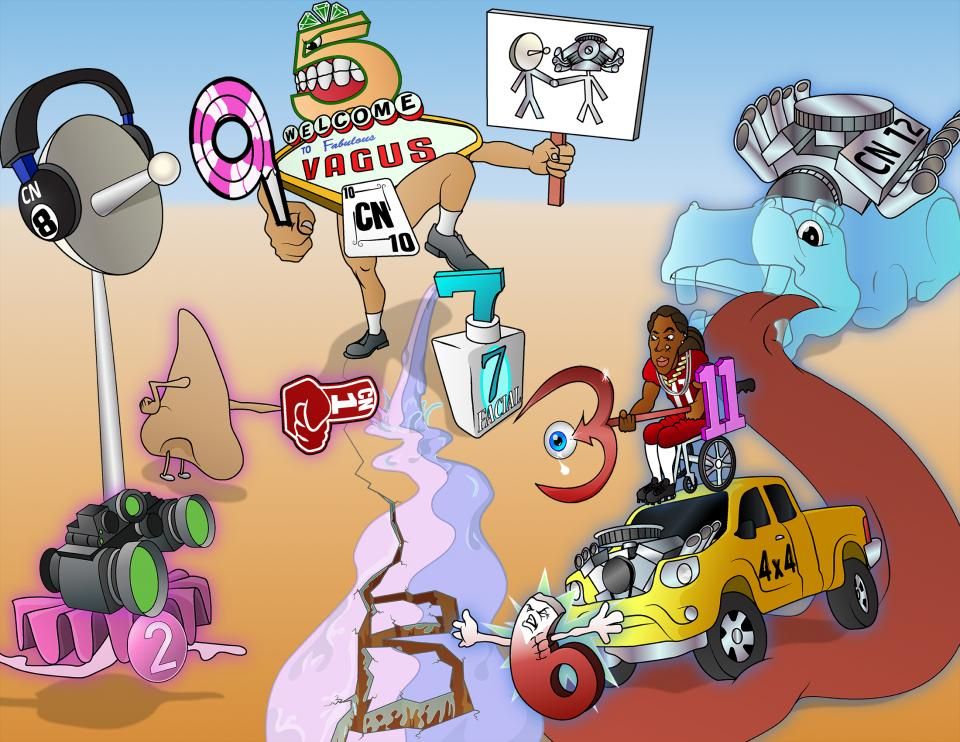 The cranial nerves consist of 12 pairs of nerves originating directly from the brain and brainstem. They supply both motor and sensory information from the brain to other parts of the body, primarily supplying the region of the head and neck.

Neurons are the main cells of the nervous system. They’re composed of a cell body, which contains all the cell’s organelles, and when there’s a group of neuron cell bodies located in the central nervous system, the whole thing is called a nucleus, while a group of neuron cell bodies that are located outside of the central nervous system is called a ganglion. Neurons have nerve fibers that extend out from the neuron cell body - these are either dendrites that receive signals from other neurons, or axons that send signals along to other neurons. Where two neurons come together is called a synapse, and that’s where one end of an axon releases neurotransmitters, further relaying the signal to the dendrites or directly to the cell body of the next neuron in the series.

Now, the peripheral nervous system consists of nerves, which are enclosed bundles of axons that connect the central nervous system to every other part of the body. Some nerves are purely sensory or purely motor, while most nerves are mixed. Nerves are either classified as cranial nerves - those are ones that exit from the skull and innervate the head and neck - or spinal nerves, those are ones that exit from the spinal cord and innervate the rest of the body. Let’s focus on cranial nerves.

There are twelve cranial nerve pairs that are numbered based on the order in which they arise from different nuclei in the brain, except for cranial nerves eleven and twelve, which are inverted. In order from one to twelve, the cranial nerves are called olfactory, optic, oculomotor, trochlear, trigeminal, abducens, facial, vestibulocochlear, glossopharyngeal, vagus, accessory, and hypoglossal. And a quick way to remember them is with the acronym “On Old Olympus’ Towering Top A Finn Van German Viewed A Hop.” The cranial nerves exit the skull through different openings or foramina. The primary functions of the cranial nerves - so sensory, motor, or both for mixed - can be remembered with the acronym “some say marry money, but my brother says big brains matter more.”

The second cranial nerve, called the optic nerve, actually emerges from the retina of the eye. The optic nerve then passes through the optic canal and meets the optic nerve coming from the other eye at the optic chiasm. Here, partial decussation occurs, meaning that the nasal fibers that carry input from the temporal visual fields of the eye cross to the opposite side. After decussating, the optic nerve fibers form the optic tracts. So each optic tract carries information from the opposite visual field of each eye. Then, the optic fibers travel and synapse at different nuclei – some synapse at the suprachiasmatic nucleus located in the hypothalamus and help regulate the sleep wake cycle, some synapse at the pretectal nucleus in the midbrain and help regulate eye reflexes, and most fibers synapse at the lateral geniculate nucleus in the thalamus. From here, thalamic fibers form the optic radiations, which run to the occipital visual cortex where the brain interprets what you see.

There are three purely motor cranial nerves in charge of eye movement: the third cranial nerve, called the oculomotor nerve, the fourth cranial nerve, called the trochlear nerve, and the sixth cranial nerve, called the abducens nerve. The oculomotor nerve arises from the ventral midbrain, and then it runs through the superior orbital fissure - a foramen in the sphenoid bone of the skull, to enter the orbit. Here, the oculomotor nerve splits into a superior and inferior branch. The superior branch innervates the levator palpebrae superioris muscle - which raises the upper eyelid – and the superior rectus muscle that elevates the eye. The inferior branch innervates the inferior oblique, and the inferior and medial rectus muscles, which help elevate and abduct, depress and adduct, and just adduct the eyeball, respectively. Some fibers of the inferior branch go to the ciliary ganglion, and synapse with autonomic nerve cell bodies. From here, the short ciliary nerves arise, carrying autonomic motor fibers to the sphincter pupillae muscles - which cause pupil constriction or miosis - as well as to the ciliary muscle, which helps with lens accommodation for visual focusing.