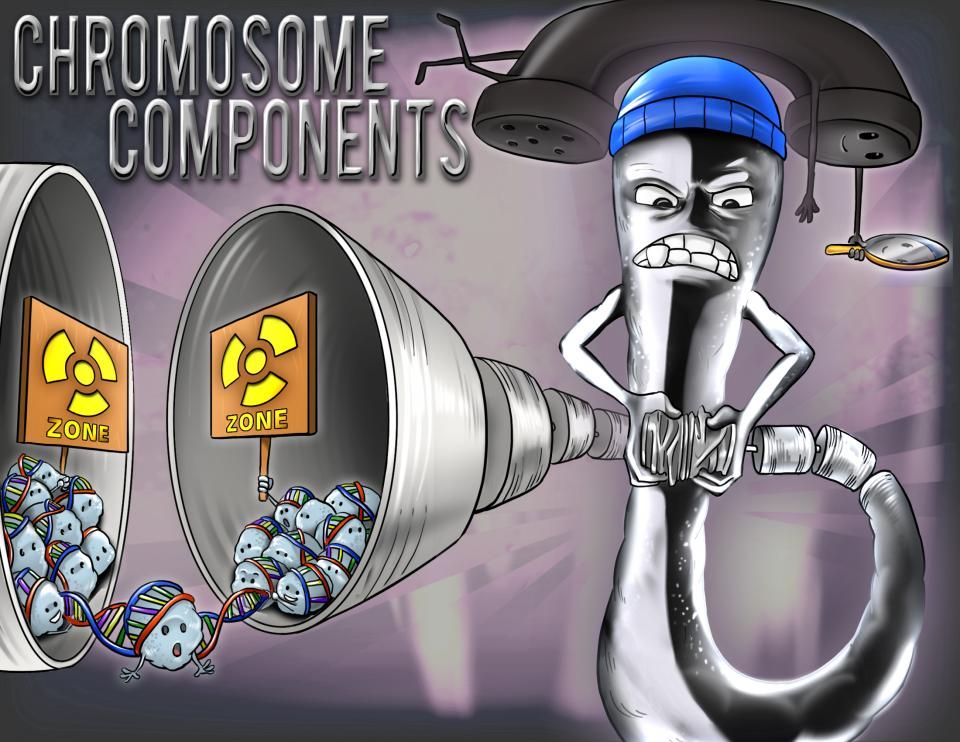 At a quick glance, the life of a cell - it’s cell cycle - is pretty routine.

It’s either actively dividing, or preparing to divide into two daughter cells.

A single chromosome is made up a single DNA molecule that has two strands, which wrap one around one another to form a double helix.

Each single strand of DNA is composed of a sequence of four types of nucleotides - which are the individual letters or building blocks of DNA.

Nucleotides of DNA are made up of a sugar - deoxyribose, a phosphate, and one of the four nucleobases - adenine, cytosine, guanine, and thymine - or, commonly, A, C, G, T for short.

Kinda like two snakes coiled up together, but facing in different directions.

DNA replication can be described as semiconservative.

That means that each strand of the double helix acts as a “template”, based on which a new, complementary strand will form.

Eventually the original chromosome will split into two exact copies, each made of one of original strands, and one of the newly made ones.

Initiation kicks off when a group of proteins get together to form the pre-replication complex.

This pre-replication complex looks for specific nucleotide sequences along the DNA strand - called origins of replication.

And yes, we’re talking plural! That’s because our DNA strand is so long that DNA replication actually starts in several origins along the chromosomes simultaneously.

These special nucleotide sequences have a ton of A and T bases.

Because A and T are joined by only two hydrogen bonds, the enzyme DNA helicase has a relatively easy time separating the two strands.

This creates a replication fork, with the two prongs of the fork being the two strands that are separate from one another.

Single strands of DNA can get a bit unstable, so to help keep them from getting back together again, helper molecules called single stranded DNA binding proteins come in and bind to each of the lonely strands.

Also, as DNA helicase breaks down bonds, the segments of DNA ahead of it start to overwind - meaning, the double helix becomes more tightly wound.

You can try this with a close friend who has braided hair - if you pull the braid apart in the middle then the ends get tighter.

Again - make sure it’s a friend and not a stranger.

The second step is elongation, and for that we need a new enzyme - RNA primase. Yes, you heard that correct, RNA this time.

It’s kinda like DNA, it uses ribose instead of deoxyribose in its nucleotides, and instead of thymine, it uses uracil.