Assessments
Development of the digestive system and body cavities 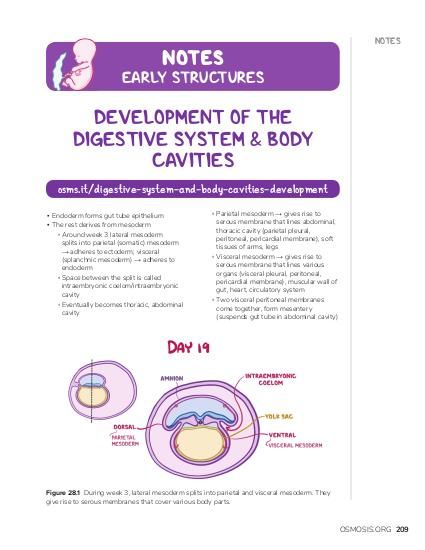 Development of the digestive system and body cavities exam links

During the third week of development, the embryo is a flat, three-layered disc, and each layer contains germ cells that give rise to the organs and tissues of the body.

The ventral, or bottom, germ layer is called the endoderm, and it forms the lining of the gut tube and the respiratory system.

The middle germ layer is called the mesoderm, and it forms connective tissues like muscles and bones.

And the dorsal, or top, germ layer is called the ectoderm, and it gives rise to the sensory organs like the skin, the eyes, and the central nervous system.

This space, called the intraembryonic coelom, or cavity, separates the lateral plate mesoderm into dorsal and ventral layers.

The dorsal layer is the parietal mesoderm layer, and its cells adhere to cells from the overlying ectoderm and wrap around the amnion.

The ventral layer is called the visceral mesoderm layer, and its cells adhere to cells from the underlying endoderm, which covers the yolk sac.

These membranes are really important because they prevent the organs from getting injured as they rub up against each other or against the body wall.

During the fourth week of development, the embryo undergoes structural changes, transitioning from a trilaminar disc into a more cylindrical shape.

The combined visceral mesoderm and endoderm layer, which lines the yolk sac, folds rostrally and caudally, creating a primitive gut tube out of the yolk sac and leaving the remainder of the yolk sac in the middle section of the gut.

While that’s happening, the combined parietal mesoderm and ectoderm folds down with the amnion forming the lateral body folds, which eventually merge and become the anterior body wall of the embryo, or what you might think of as the chest.